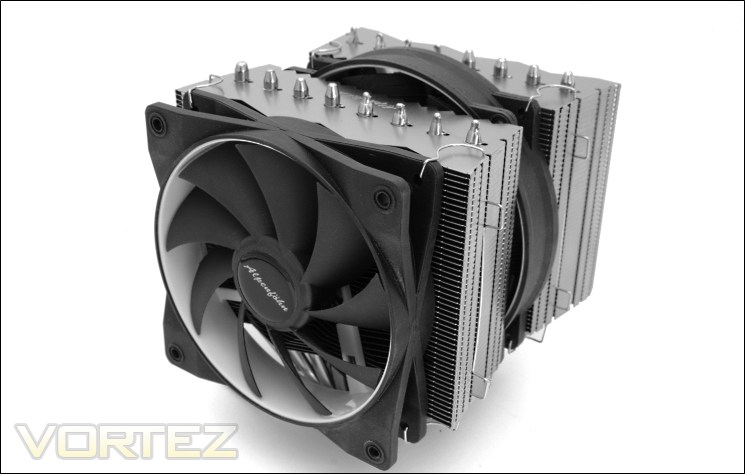 The Alpenföhn - 'Mount Doom'
The Alpenföhn K2 is very distinctive in appearance and easily the best looking cooler to grace the cooling market today. Whereas Noctua insist on using their customary brown on their fans, and Thermalright seemingly doing the same with their TY-140s (only this time in an odd shade of blue and green), Alpenföhn have listened hard to the pleas echoed by potential buyers and settled for a safe but fantastically effective black and white theme. The heatsink itself is a nice matte silver that lacks the dullness of the NH-D14 and the reflectiveness of the Silver Arrow, striking a perfect balance instead. The quirky fan frame also adds to the appeal of the cooler. What is immediately apparent is the coolers sheer size thanks to its dual tower design, and its eight 6mm heat pipes. 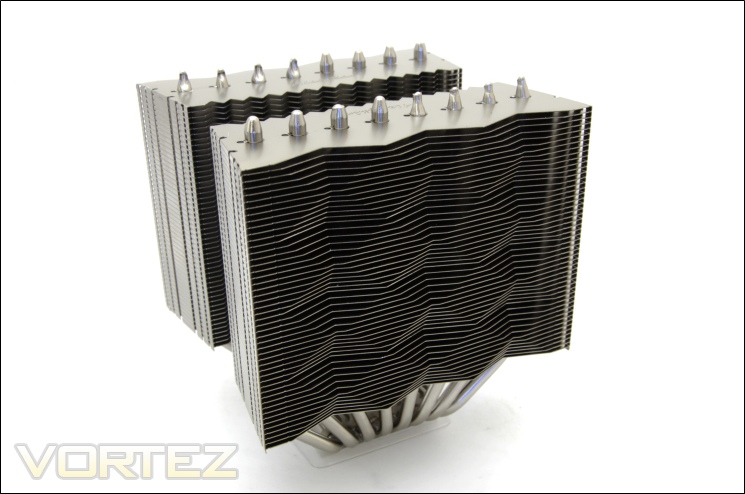 The dual tower heatsink - 'The Two Towers'
Looking at the heatsink solely, we see a very unique fin array design that brings the K2 some character. Each block features trapezoidal shaped fins both getting narrower towards the centre. Although the purpose of this is to ensure compatibility with adjacent PCIe expansion devices, the fact that the widest cross-section would already get in the way means that the shape doesnt really serve a function other than aesthetics. And aesthetics is not something the K2 lacks. The front face also has a distinguishing design differentiating it from the more regularly stacked alternatives. The overall construction feels very robust. 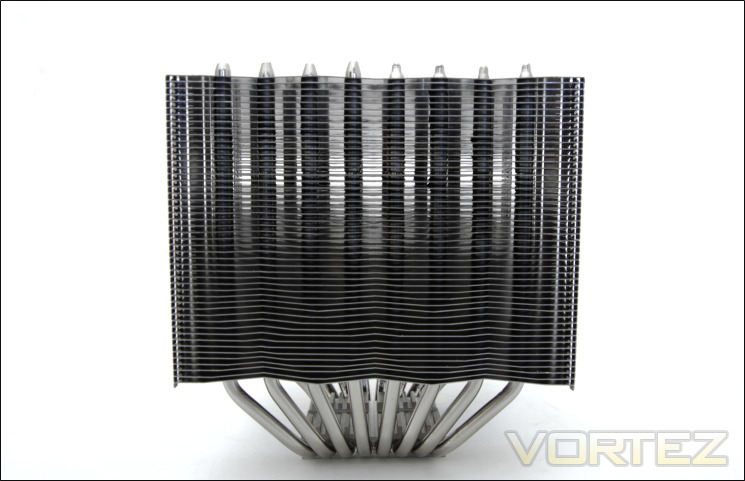 The front face of the heatsink
Turning our attention to the front face of the heatsink reveals the laminar stacking of the fins across both radiators, all 49 of them. This is 5 more than the Phanteks PH-TC14PE, and 7 more than the Noctua NH-D14 but 6 less than the Thermalright Silver Arrow. The result is each fin boasting a surface area of 6850mm squared, very similar the Phanteks. Considering the K2 features more fins, it ends up with a greater surface area for heat dissipation. The fins are also more tightly spaced than other coolers with a gap of merely 2mm rather than 2.5mm, suggesting that high static pressure fans will prove beneficial. Through the fins, we can also see the columns of heat pipes rising up. Each fin is interlocked to maintain structural rigidity and to close off the sides. 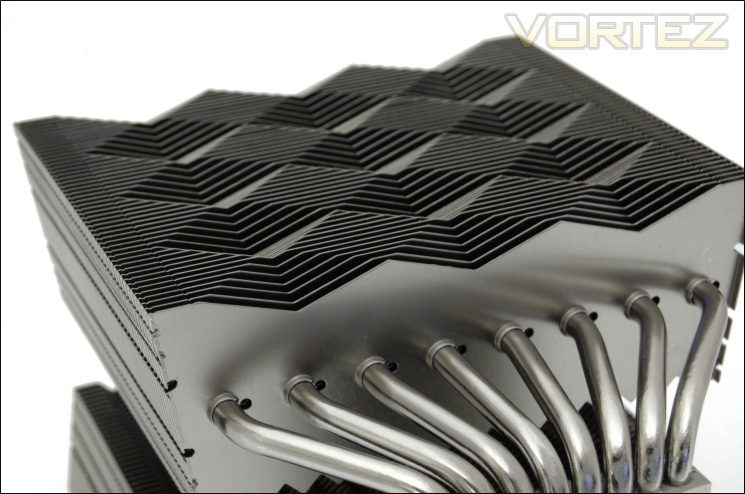 The fin stack design
Taking a closer look at what the fins are shapes like, we observe that the front face is actually flat with pyramid shaped depressions across the profile. These create a checker board pattern and the purpose, other than aesthetics is to create varying gaps between the fins and the fan. Its creativity sets Alpenföhn apart from other manufacturers and the best thing of all is that unlike the Noctua and Phanteks coolers, there are no sharp ridges digging into your fingers when installing. From a purely geometric standpoint, I absolutely love the K2. 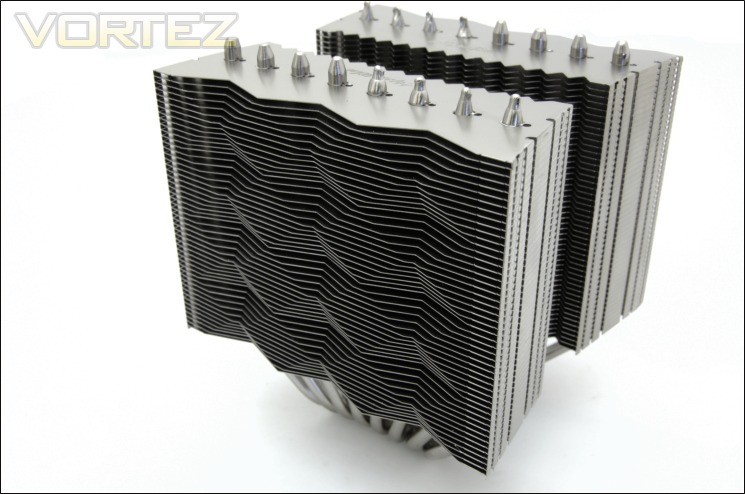 The fin stack design again
At an angle, the pattern is accentuated further to give the K2 a unique and memorable profile. 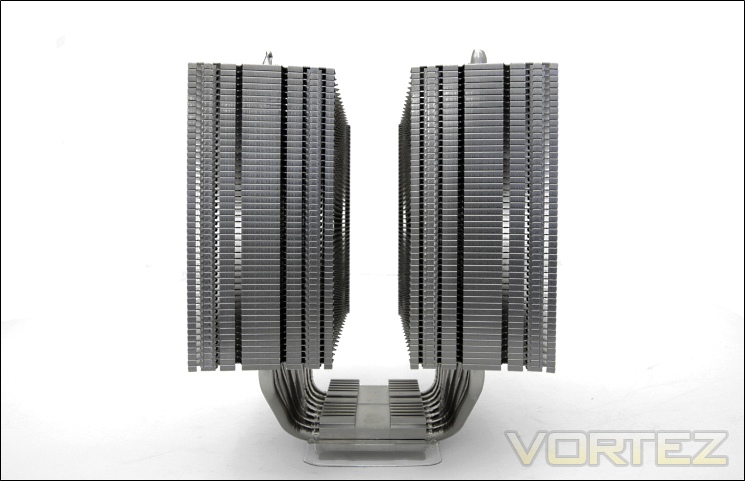 The side profile
From the side, the most stand-out feature is the closed fin design, which Alpenföhn highlight is to direct airflow. We saw similar design cues with the Triglav, Matterhorn and Nordwand. The problem with choosing this design for such a cooler is that the middle fan can only draw air from the centre rather than from the side so cool air cannot be fed through the second radiator. The two radiator stacks are also symmetrical about the base, unlike the Noctua where one stack protrudes further than the other for memory compatibility. This shouldnt be a drawback because the K2 is less deep by about 4mm anyway. The 28mm gap in the middle is reserved for the 140mm fan although this can be tight when manoeuvring it in. 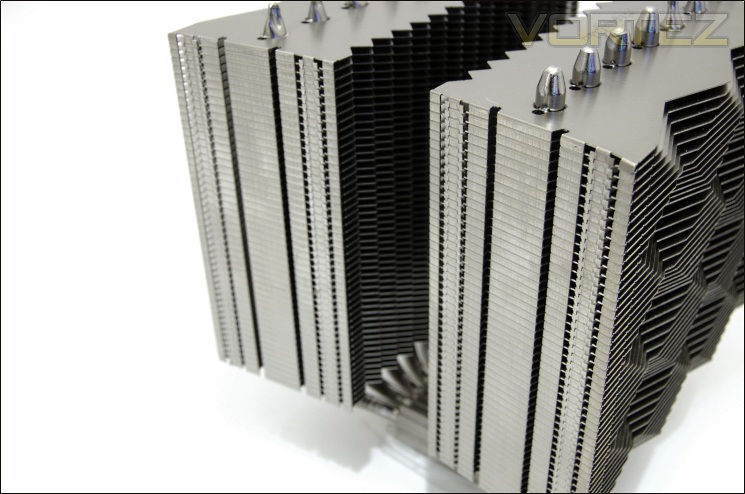 The closed fins
We can see here that each fin is interlocked at the sides and closed off in the process to focus airflow through the heatsink. The finish on the K2 is second to none. 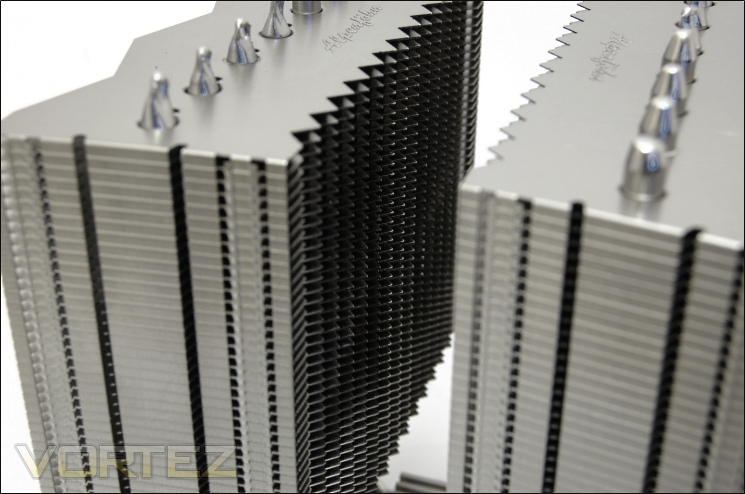 The serrated fin edga
On the inside of the radiators, the fin edges are jagged just like the NH-D14 to increase turbulence in airflow and thus to maximise heat transfer.