All too often were here offering you reviews of processors costing several hundred pounds with a million cores and enormously high clock speeds, but today were bringing you something much more affordable and, dare we say it, a little sedate by recent measures.

The AMD Athlon 3000G is based on AMDs Zen architecture from 2017, so its already old-tech, so to speak, but that certainly doesnt mean you should write it off straight away. For starters, theyve had time to perfect the recipe in the previous two years, and a lot of time to bring the cost right down for true entry level builds; right down as far as £49.99 in the UK, and did we mention that also includes a GPU?

Sporting a dual-core, quad-thread arrangement, the 3000G operates at a 3.5GHz all-core frequency, with no turbo clocks in sight; you get 3.5GHz regardless of workload. Whats more is that theyve also removed any kind of overclocking limiter, unlocking the processor to give you additional headroom to really open it up, with, from what we can see, 4.0GHz being easily attainable. Not only that, the 3000G is rated at a 35W TDP at stock but AMD are shipping the processor with a 65W cooler, making sure the overclocking headroom is available from the outset without needing to invest more money into an expensive cooler. 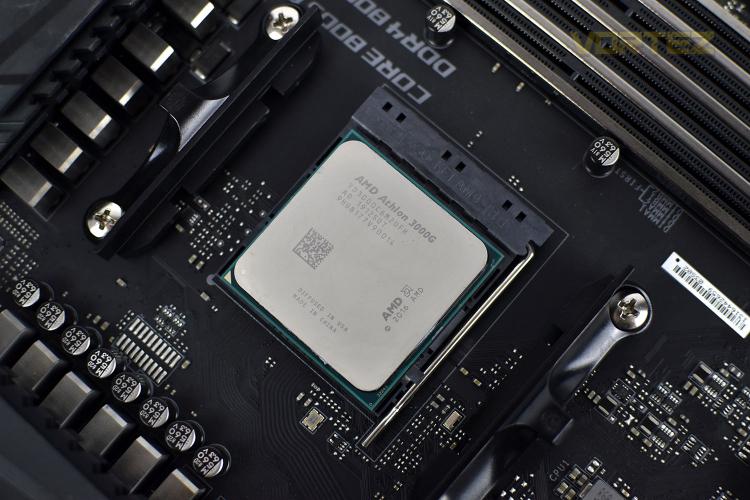 Providing the graphics horsepower is a VEGA 3 GPU, clocked at 1100MHz. The 3 signifies the number of processing cores within the GPU, of which each possesses 64 Stream Processors, just like their Radeon range of discrete GPUs. Well give the GPU a fair go, but 3 GPU cores and an 1100MHz core speed lead us to believe well be strictly limited to casual 720p gaming.

Those of you with a keen eye may feel like youve seen this before, and youre quite right, the entire APU package appears to be an AMD Athlon 200GE thats been turned up to 11 and provided with a beefier cooler, at a lower price.

With Intel currently struggling with 14nm production and discrete GPUs, even on the used market, typically costing more than this entire package, does it present the compelling purchase it appears to or is the 3200G and 3400G, at only a little extra cash, a better option? Lets find out.

AMD on the Athlon 3000G:
The NEW AMD Athlon 3000G processor is a trusted brand with modern Ryzen processor and Radeon graphics technology features, delivering powerful entry-level graphics technology for casual gaming, combined with advanced AMD processing power to deliver sharp performance and high-fidelity visuals on a reliable AM4 platform. The AMD Athlon 3000G processor is the only unlocked option in its segment.i]

There are currently 660 user(s) online:
Google