Finally its here. The long-anticipated AMD FX Bulldozer processors launch today and we have the top of the pile to show you. In development for close to 6 years, and comprising of a totally new architecture, the AMD FX CPUs are AMDs most significant product release for many years. With the recent launch of Intels second generation Sandy Bridge CPUs, consumers have been waiting for AMDs next move to counter these impressive processors. Today it comes. 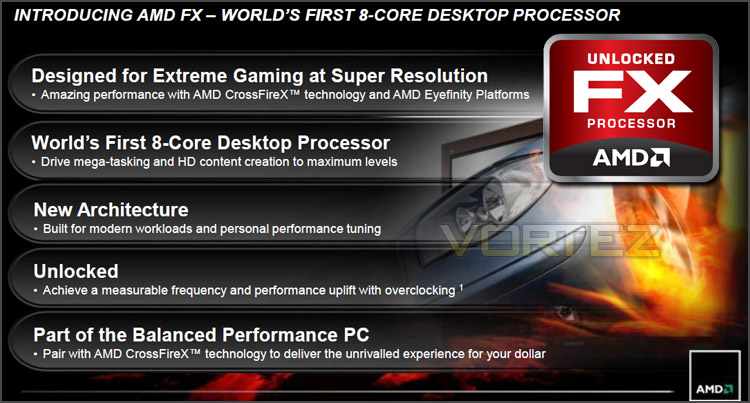 Here at Vortez we have sampled the AMD FX-8150 and put it through its paces for you. We have compared it to AMDs previous generation flagship, the Phenom II 1100T, and in select tests, Intels i5 2500K, 990x and i7 920 at stock and overclocked settings.

We will also be covering some of the technology behind the new 'Bulldozer' architecture for those who are interested to see how it all works. Read on to see how the new AMD flagship CPU performs.

AMD's take on Bulldozer
Bulldozer was designed to balance performance, cost and power consumption on multi-threaded applications. The architecture focuses on high-frequency and resource sharing to achieve optimal throughput and blistering speed in next generation applications. AMD FX Processors offer up to eight high-performance, power-efficient cores. These represent the First generation of a new execution-core family from AMD (Family 15h). Other specs include: