Prices are set to start at $159USD for the HD7770, while the AMD Radeon HD 7750 will be as low as $109USD. As with all new entrants into the market, prices are inflated a little and with the unstable economic markets we will have to wait and see what UK retail prices pan out at. Having a quick perusal over the specifications of the card I would expect the HD7750 to be priced between that of the NVIDIA GTX550Ti and the GTS 450. While far from the cheapest of graphics cards on the market it will be affordable for all but the most careful of consumers.

Based on the new 28nm manufacturing process, AMD have managed to cram in 1.5 billion transistors. The 512 stream processors afford 819 GFLOPS of computational power. The cores reference clockspeed is 800Mhz and coupled with a gigabyte of GDDR5 clocked at 1125MHz gives a texture fillrate of 25.6 GT/s and a pixel fillrate of 12.8 GP/s. 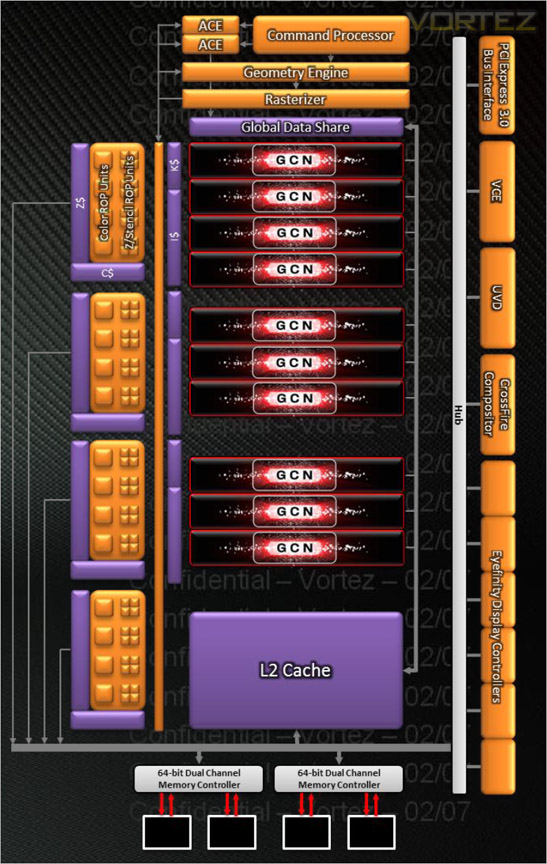 The Cape Verde Core on the HD7750 features 512 stream processors. It has 512KB of L2 read-write cache but sadly we see the new core doesn't have the same 320-bit memory interface like we saw with the Tahiti but makes do with 128-bit. Regardless, the HD7750 produces up to 72 GB/s of bandwidth which is still impressive.

It is worth noting too that the typical board power consumption is reported to be around 55W with an idle power consumption of less than 3W thanks to AMD ZeroCore power technology. Let's see how these specs measure up to the competition: 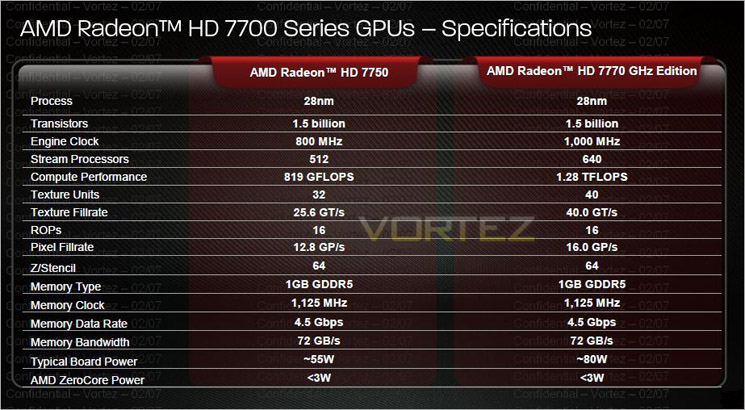 Compared to the HD 7770 we see that the smaller of the two sacrifices 200MHz clockspeed along with 128 stream processors. The resultant fillrates are somewhat affected but the good news is that the power consumption is also reduced.

It is worth noting at this point that the replacement for the hugely popular 6800 series, codenamed Pitcairn which will cater for the mid-high range of graphics card solutions will surface around March in March and with the Tahiti cored HD7900 series already upon us, the HD7000 series will be bringing up the rear.

So, while the HD7700 series may well be considered as 'entry level', it has all of the features of the flagship 7900 range of GPU's which include GCN (Graphics Core Next), Eyefinity 2.0, HD3D, ZeroCore Power and PowerTune to name but a few.