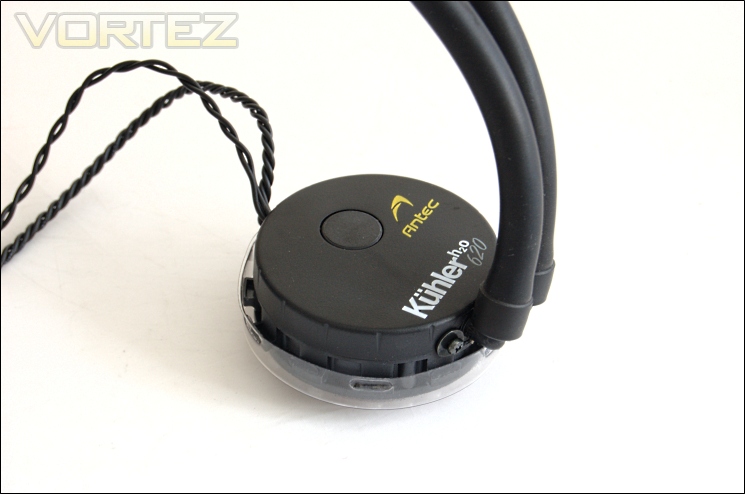 The CPU block with integrated pump
Connected to the other end of the tubes is the CPU block and pump. According to the CPUID Hardware monitor, the pump operated at 1400RPM, which is substantially lower than the KÜHLER H2O 920s 3000RPM pump. Despite that, the size of the KÜHLER H2O 620s block is a mere 2mm less than its bigger brother. Unlike the KÜHLER H2O 920, the 620 doesnt support RGB LED lighting, hence the yellow Antec logo instead to follow the products colour theme. The model name is also imprinted on top. The top of the block also features a small disc, which doesnt seem to do much as it doesnt move. 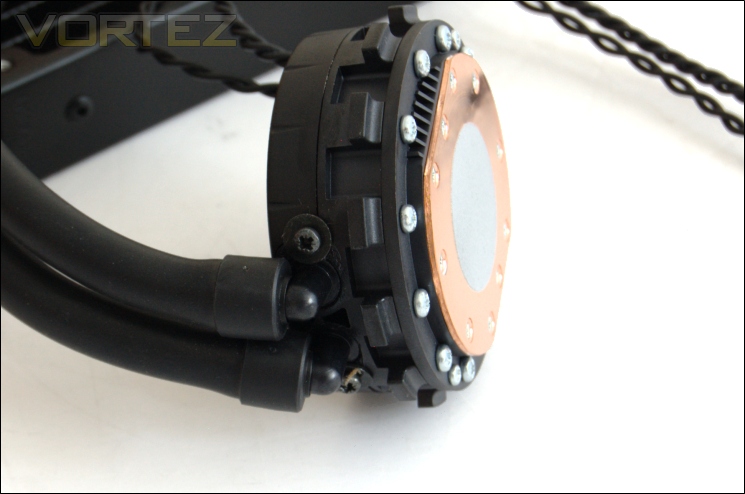 The barb fittings
The tubes are connected to 90 degree barbs on the pump. The plastic shroud at the top is secured by screws which also keep the barbs in place. Near the base are alternate grooves and clips for installation using the mounting kit. 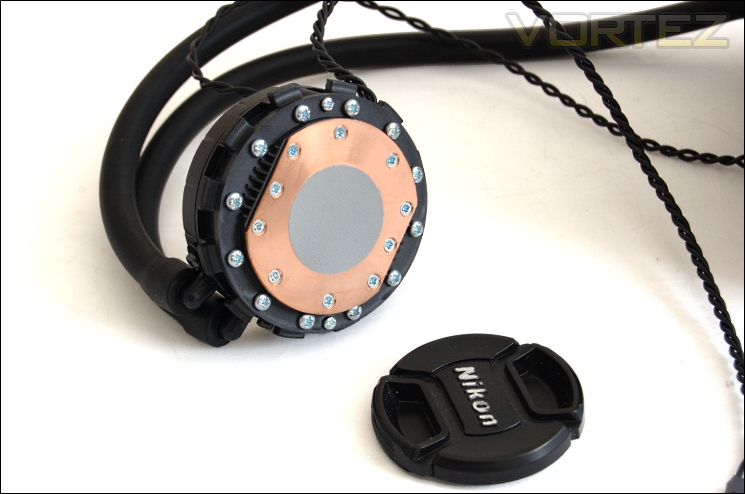 The CPU cold plate with pre-applied thermal paste
The copper cold plate at the base comes pre-applied with thermal paste that spreads very well onto the CPU when installed. The copper base is flat but lacks a mirror finish. The base is not dissimilar to other Asetek based Corsair units with its circular shape. However, Antec highlight that their coolers feature Aseteks third generation copper cold plate whereas Corsair uses their first generation. 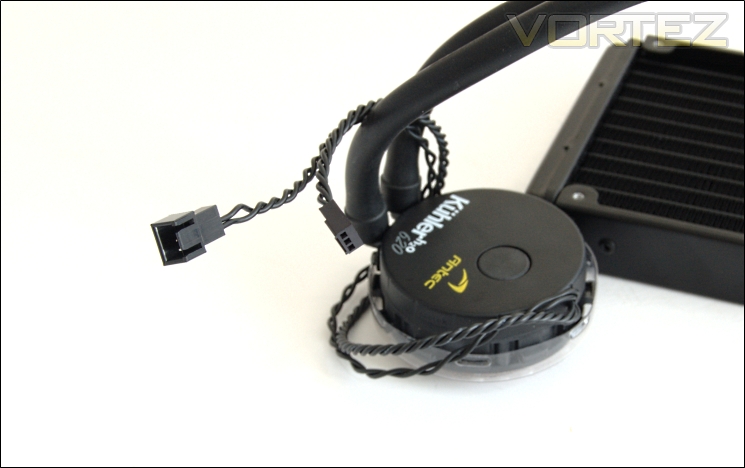 Pump and fan cables
Like the 920, the KÜHLER H2O 620 has an array of cables connected to the CPU block, although not an extensive one. The first cable is a fan header acting as an extension for the bundled 120mm, and the other cable is for the pump and power which connects directly to a fan header on the motherboard. What is strange is that the fan cable is only 2 pin and therefore lacks an RPM readout. Based on what Antec have said, fan control comes through voltage regulation via the CPU block and changes according to the coolant temperatures. Unfortunately, there are no temperature or RPM readout like on the 920. 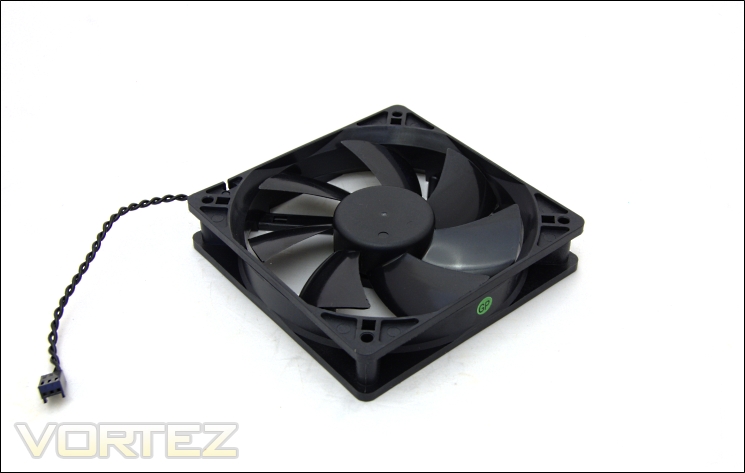 The fan
The single bundled 120mm fan is seven bladed and is advertised to work between 1450 and 2000 RPM. However, although it connects to 3 pin fan headers there are only two cables attached to it; the 12v and ground cable. As such, there is no RPM read out or PWM functionality so how the fan speed is adjusted, I am not sure. The corners are also closed to allow the long provided screws to feed in much easier when installing to the radiator. The fan cable uses a twisted weave over standard braided. Thankfully, this somewhat cheap approach works well. 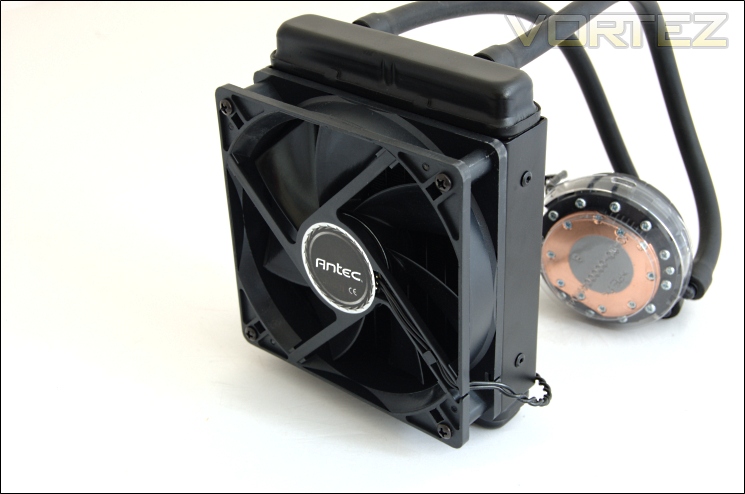 Installing one fan
The fan is designed to act as an exhaust fan extracting hot air from the radiator. The closed corners ensure the long screws can reach the radiator more easily when installing. Since the length of the fan cable is very short, the extension cable from the pump helps. 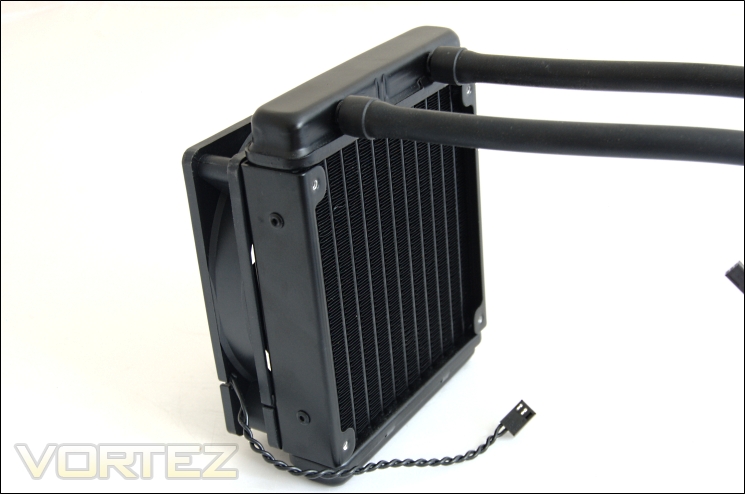 Adding a second fan
On the front side of the radiator are 4 additional holes to mount a second fan. Unfortunately, Antec dont provide 4 more long screws but it is possible to simply mount the back pull fan with 2 screws at opposite corners and use two spare ones on the front push fan.