👤by Sahil Mannick  Comments 📅21-10-10
Specifications
The Barts core is aimed at the upper mid-range market and I have to emphasise again at this point that both the HD6870 and HD6850 are replacements to the old Juniper core, with a substantial enough boost and tweaking to make them compete with the older generation high end HD5850. Naming scheme aside, its exactly what we should have expected for a refreshed mid-range card. Its akin to the position of the HD5770 lying between the previous high end HD4850 and HD4870, when it came out last year. The confusion comes with AMDs choice of nomenclature but consumers should focus on the price/performance ratio rather than the implied performance based on the graphics card name. In my opinion, its an Nvidia-esque move and will certainly not prove popular at first but if we look at this new generation of card on its own, it does make sense. Caymen and Antilles will represent the high end HD69XX series next month on their release. These cores make up the Northern Island GPUs that AMD have been touting for a while now. It could be deemed strange that AMD didnt release their high end cards first followed by the mid-range offerings for a halo effect but in reality, AMD needed a product that would be more competitive with Nvidias GTX460 hence the introduction of Barts to compete for the upcoming holiday season.

So what does this new core actually bring to the table? There are two variations of the core, Barts Pro and Barts XT, the former sporting 960 stream processors and the latter having 1120 of them. These do not match the configuration on the Cypress core but they are derivatives with various tweaks to improve efficiency. Sporting 1.7 billion transistors on a 255mm squared die size, the Barts core is significantly smaller than Cypress but a major improvement on Juniper. A welcoming feature is the 256bit bus and 1GB of on-board memory for much higher memory bandwidth than previously found on AMDs mid-range offerings.

Architecturally, Barts builds on the same VLIW5 design found in previous DX11 cards. The core uses a number of SIMD clusters, each sporting 80 stream processors and 4 texture units. The different configurations produce the two Barts variant. The number of ROPs on both cards remains at 32.

Compared to Nvidia, AMD has been lacking in tessellation performance but with the Northern Island GPUs, they have tried to address the issue with a more robust tessellation engine. Clearly AMDs aim has been to bring a large fraction of Cypresss performance on a much smaller die size. The results later will cover whether they have achieved this goal. 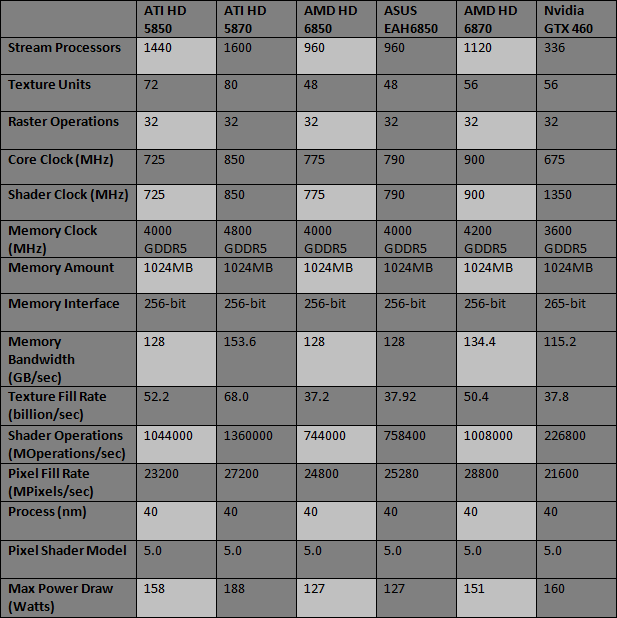 The main aspects where the Barts core lose out are texture fill rate and shader operation due to the much lower stream processors. The clock speed boost isnt enough to compensate for those but again we have to remember that their market segment is at a lower end. On the plus side, they do contribute to higher pixel fill rates. Comparing them to the GTX460, AMDs offerings appear more favourable. The HD6870 looks to be significantly faster whilst the HD6850 shares some similar figures. More interestingly is Bartss impressively low power consumption, 127W for the HD6850 and 151W for the HD6870. The overclock on the HD6850 is a mere 2%, which is reflected in the fill rates and shader operations. This may not be much initially but the ASUS card has voltage tweaking capabilities to allow users to take it much further.