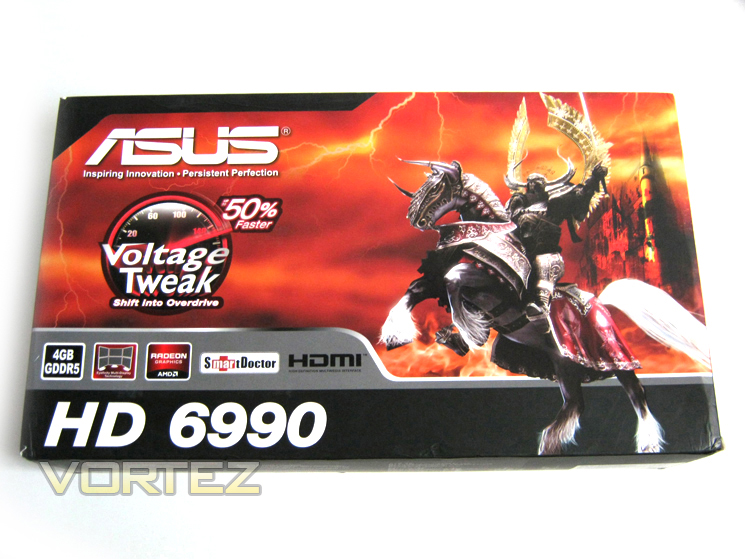 The box front
The box is pretty much a standard affair with the familiar Dark knight dominating the front of the package, embossed onto a matt orange picturesque fantasy castle scene. 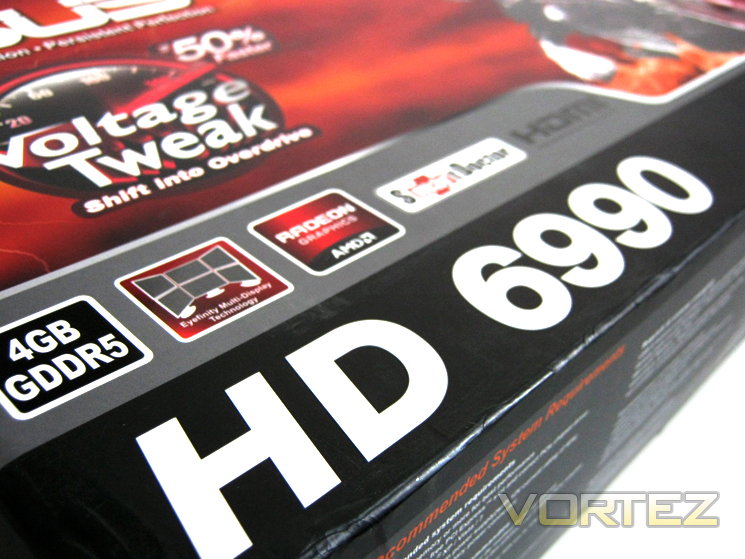 The box front features
The main feature ASUS appear keen to push is the Voltage Tweak 'shift into overdrive' option, claiming up to 50% faster clockspeeds. With the card already consuming 375W-450W, I am apprehensive to push the boundaries even further by using the Voltage Tweak feature but we will see what happens later in the review. 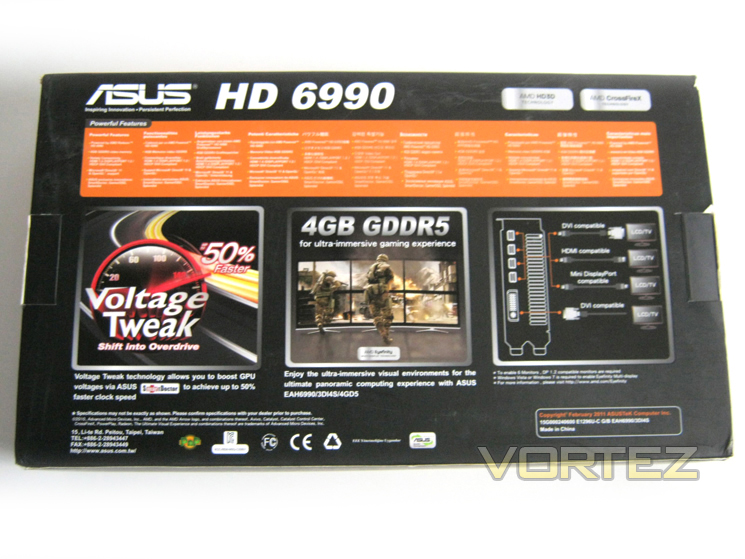 The box rear
Flipping the box over, we come to the rear of the box which has a full multi-lingual breakdown of the powerful features the HD6990 has to offer including 4GB of GDDR5, Variety connectivity, DX11 support along with ASUS' own innovations mentioned on the features page of the review. Again, Voltage Tweak (do you really want us to destroy the card ASUS?) makes an appearance along with a and Eyefinity screenshot of what looks to be displaying Battlefield 3. This sits alongside a connectivity diagram. Sadly there was no copy of Battelfield 3 to be found in the package! 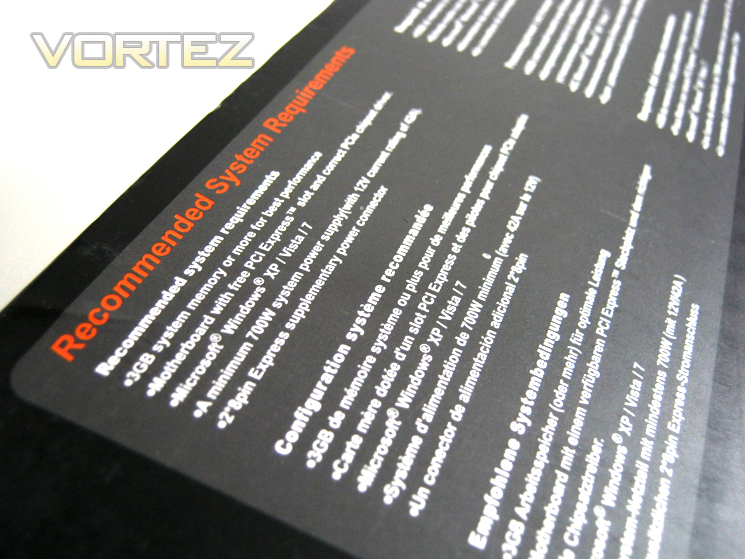 The system requirements
The bottom of the outer sleeve shows the system requirements/recommendations to run the HD6990 which are as follows: 3GB of system memory, free PCIe slot, Microsoft Windows XP/Vista/7,A minimum 700w power supply with a 12V current rating of 42A and 2 x 8pin PCIe PCI Express supplementary power connectors. 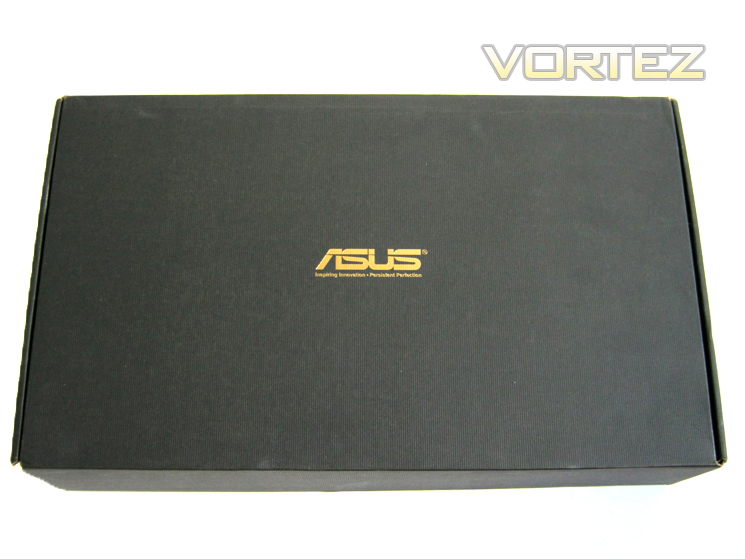 The inner box
Removing the outer sleeve leaves us with a quality corrugated cardboard inner box adorned with a golden ASUS logo. I must confess I have long been a fan of the ASUS style of packaging which is very neat, efficient and yet pleasing on the eye. 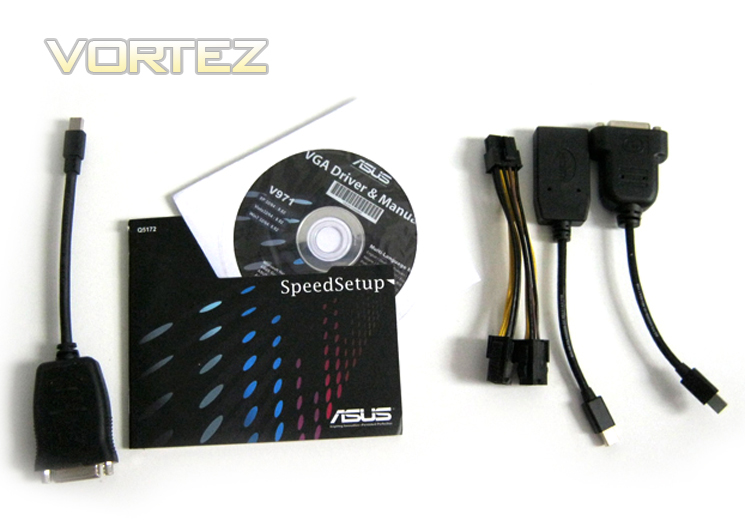 The accessories
Opening this inner box we were greeted with a further slimline box containing the accessories above which include: Driver and utilities CD inside a familiar 'speed setup' paper wallet, 1x dual 6pin to 8 pin PCIe power converter, 2 x Mini DP to DVI adapters and 1 x Mini DP to HDMI adapter. 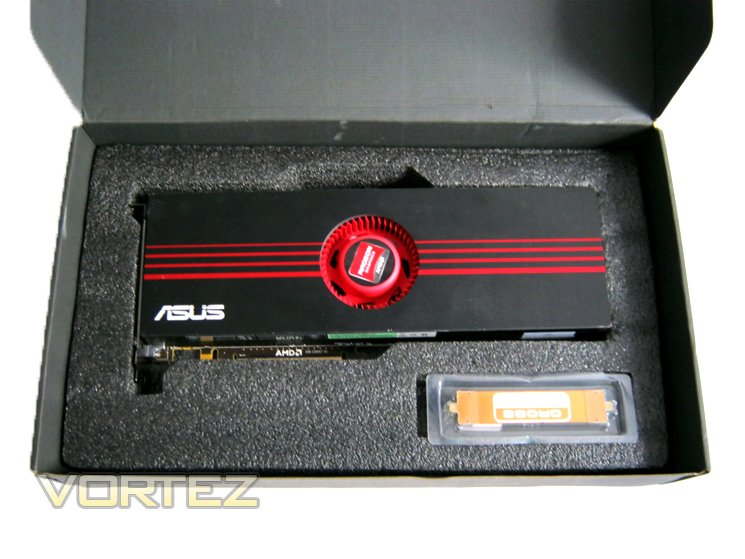 The graphics card compartment
Finally after the Babushka style packaging we arive at the main box containing the card which is held very tightly by Styrofoam. The foam brace also has a little cutout containing a Crossfire bridge.

While the packaging is very neat and tidy and the accessories apt for a card of this nature, I was disappointed to find that there was no included game. For £500, I would at least have expected a good DX11 title to supplement the product but alas there was none which was a shame considering the thought that had gone into the rest of the product.

Let's now take a look at the card itself...