👤by Sahil Mannick  Comments 📅14-11-10
ASUS P8P67/Deluxe
ASUSs motherboards are segmented into three categories; Premium Deluxe which covers their ROG and Deluxe branded boards, mainstream, and value. The P8P67 falls under the mainstream category whilst the Deluxe variant will be their higher end offering, not dissimilar to their current naming scheme amongst their Intel motherboard line up. Both motherboards will end up sporting very similar feature sets so lets see what we can expect from them. 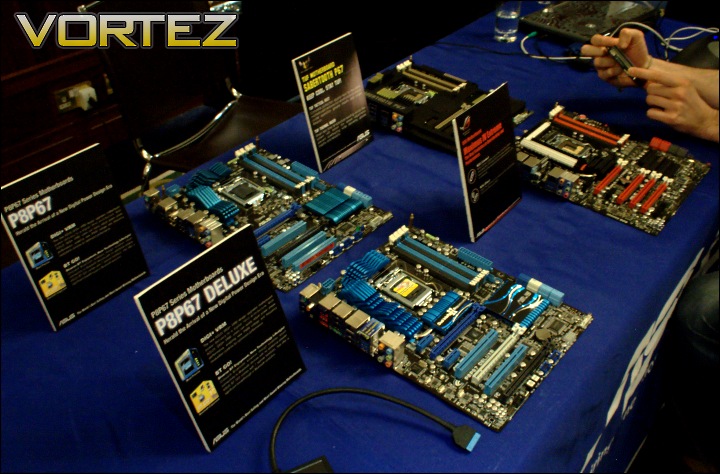 ASUS have been very vocal about their two unique on board processors that they have named TPU and EPU. They have now brought the two together and named the concept Dual Intelligent Processors II (DIP II for short). In our recent interview with Jack Cheng from ASUSs motherboard interview, he mentioned that TPU is a highly customizable micro-processor targeted at performance tuning through dynamic control of key variables. TPU has been integrated into their motherboards to give users easy access to performance tuning utilities that would often be daunting to first time overclockers attempting to delve into BIOS. There are several ways users can use the benefits of the chip to gain extra performance. The first is through auto-tuning, which when selected will let the motherboard intelligently overclock the CPU, RAM, and iGPU, stress testing to make sure everything is stable. This can either be done in Windows using the TurboV EVO application or via an on-board switch for users that hate the thought of installing bundled motherboard software. 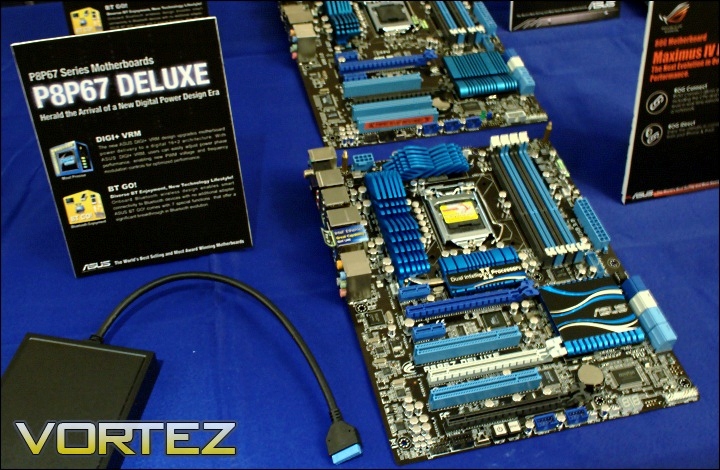 The P8P67 Deluxe motherboard. The Deluxe has extra on-board power and reset switches and a diagnostic debug LED to display error codes. The hub shown on the side is a front panel box with 2 USB3.0 ports supported by a second on-board NEC controller chip.
ASUS TPU

TurboV is something we have encountered a number of times in previous reviews. Its a Windows based utility that provides a comprehensive list of voltage and clock settings akin to what we normally find in BIOS. The key advantage of the utility is that changes are made in real time so users dont even have to enter BIOS. The EVO version is superior in that changes are applied to BIOS in real time and will therefore be saved on reboot. My assumption is that the P8P67P board will be bundled with the regular TurboV application and the EVO will be reserved to the Deluxe. Throughout our reviews, we have seen the ASUS software suite gradually improving into a unified tool. Initially, Turbo V EVO, AI Expert, AI Suite and Fan Expert were separate utilities with different functionalities but in the Rampage III Formula Review, we saw that ASUS had made tremendous progress in incorporating all these features into one easy to use software, AI SUITE II. Their upcoming P67 motherboards will bundle their most up to date rendition of the application, amalgamating all the above utilities into an easily manageable suite. Another addition to the suite is power management, brought by the on-board EPU chip. 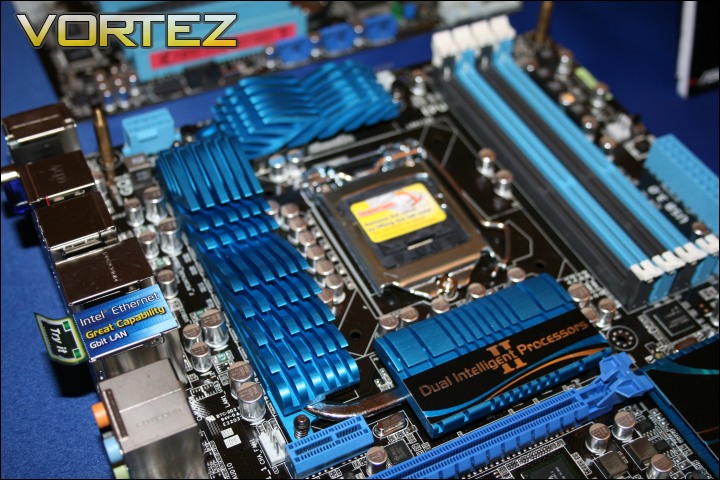 -E but the concept design applied to the heatsinks is now in the shape of waves as opposed to crystals. The board also uses a 16 digital Phase power circuitry that is cooled by the wave shaped aluminium heatsink and single heat pipe. USB3.0 support on the back panel still requires an additional NEC chip.
ASUS EPU

Shifting our attention to power management and efficiency, ASUS implement their EPU microprocessor for real time energy saving. Again, this is something we have previously covered but continuing on their trend, they have improved both its functionality and the Windows interface. EPU optimises power efficiency by dynamically or manually regulating voltages and CPU speeds based on the load applied. Marketed as a complete solution, it can control the GPU/iGPU/Fan/HDD/DRAM and chipset. An additional feature which stems from Fan Expert is EPUs ability to reduce fan speeds automatically under idle conditions, promising quieter operation. Enabling EPU can be achieved in two ways, either by using the bundled software or by using an on-board switch, bypassing the need for the Windows utility.

The P8P67 Deluxe has 3 PCIex16 slots with the top one operating at 16x link width and the other two limited to 8x. The four RAM slots support dual channel memory and higher frequencies than current P55 based motherboards. The P67 PCH supports 2 SATA 6bps ports and 4 SATA 3Gbps ports natively. The other two will most likely be SATA 6Gbps ports based on the Marvell chipset.
EPU+TPU under the DIP II moniker have evolved on the P67 platform to provide more functionality and ease of use, hence ASUSs motive to name it as the Dual Intelligent Processors II. In addition to those two chips, another microprocessor has been integrated to give users control over the VRMs, a unique innovation not seen on current ASUS motherboards.