Many overclockers will be familiar with voltage tweaking and adjusting clock speeds on their motherboards to get the most out of their CPU. Whilst the benefits of better performance have always be a yearning of overclockers around the world, they are often also met with instability and lower power efficiency. In response to the growing emphasis of lower power consumption and efficiency, ASUS have developed the DIGI+ VRM, a programmable microprocessor capable of intelligently managing the motherboards power circuitry to reduce power transfer loss and thereby improving stability. A similar concept was first introduced on the Rampage III Extreme by the name of Extreme Engine Digi+ which allowed the board to operate at a lower switching frequency to minimize power usage whilst still maintaining high overclocking headroom. Now, ASUS have decided to share the technology on their P8P67 line of motherboards.

Typically, any clock adjustments made are made using the clock generator which then affects the CPU through the base clock. The CPU Spread Spectrum then acts to stabilise frequencies if enabled. DIGI+ VRM is unique in that it implements a spread spectrum in the Vcore area to stabilise the voltages attributed to the core, PCIe bus and other parts of the VRM circuitry. It can also adjust the VRM frequency intelligently based on load to improve power efficiency. Similarly, the microprocessor will detect hot VRM areas and activate cooling accordingly. Im unsure how cooling can be activated on the passive heatsinks but more will become clear on release. The main benefit of DIGI+ VRM is higher system stability and lower EMI radiation. Stability is achieved by using a switching frequency of 300kHz and it can be increased to 500kHz for improved overclocking range. For more precise adjustments to the VRM power management, users will have all the options available to tweak in BIOS or in the Windows. 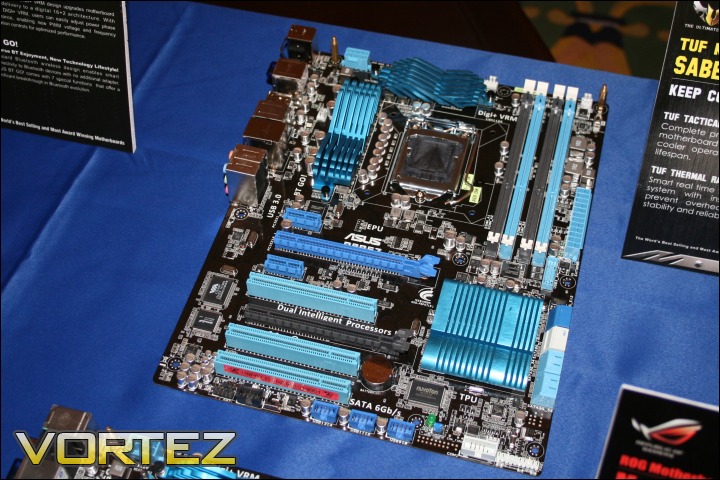 The regular P8P67 is a cut down version of the Deluxe. The main differences are the missing on-board switches and a missing heatsink below the CPU area. Notice how the motherboard doesnt have a Northbridge chipset and instead uses the area for the VRM circuitry.
DIGI+ VRM has its own Windows application for user friendly power management and tweaking. The application allows for several parameters to be altered; DIGI+ VRM Load-Line Calibration, CPU Current Capability, DIGI+ VRM Frequency, Phase Control and Duty Control. Load-Line calibration can be adjusted between regular and extreme using a slider to reduce the voltage drop on the CPU when its under load. This is highly useful when overclocking to prevent large voltage fluctuations. The next tab in the application allows users to manage the current going to the CPU giving an extra 40% overhead. The DIGI+ VRM frequency tab can be used to enable Spread Spectrum, thereby unlocking the ability to change the VRM frequency, as the name suggests. By default, it is set to 300kHz and it can be changed to as high as 500kHz, where the time delay decreases for increased overclocking headroom. Phase control is very similar to Gigabytes Dynamic Energy Saver 2 feature in that the number of active phases on the VRMs change based on the CPU load. Selecting manual adjustment opens up Standard, Optimised and Extreme mode, the latter unlocking all phases. DIGI+ VRM Duty Control is a very unique feature that adjusts cooling to the VRM circuitry based on the temperature when the T-Probe option is chosen. Extreme mode here balances the Current to the CPU for efficient power management. The application itself has a very intuitive GUI and option boxes that highlight with the hover of the cursor. Users, whether they be enthusiasts or new users, will no doubt get the hang of it very quickly, adhering to ASUSs Ease of use philosophy. 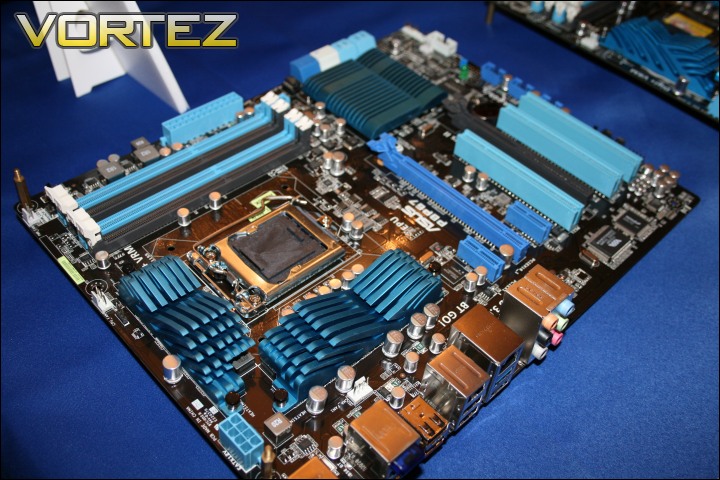 The P8P67 uses the same blue theme and wave concept. Another difference with the Deluxe is the lack of a third PCIe x16 slot which has been replaced with a PCI slot. The ASUS logo isnt emblazoned on the Southbridge heatsink, no doubt a cost cutting measure. The phase power design looks reduced from 16 to 12.
BT GO

When I was first introduced to RC TweakIt software bundled with the Extreme variants of the ROG motherboards, I had nothing but praise for it. My only complaint was that it was reserved to those boards for overclocking purposes despite the potential for a similar concept to be used for media purposes on more mainstream motherboards. Quoting my conclusion of RC TweakIt on the Maximus III Extreme review, I wrote; ASUS have put a lot of thought into the concept and I hope we see it become more mainstream in the future and it appears that ASUS have listened to our prayers. The new addition, known as BT GO incorporates a Bluetooth dongle on the P8P67 and P8P67 Deluxe motherboards. This time, functionality has increased to more than just overclocking purposes. To make the most of the feature, users with Symbian/Microsoft Mobile/Android equipped phones can connect to their PCs remotely via Bluetooth. Unlike previous renditions of RC TweakIt, iPhones will also be supported from launch.

BT GO enables three functions; File Sharing through which the phone can be synchronised and backed up to the PC, Remote Control allowing the phone to control Windows Media Player on the PC or overclock through the BT Turbo Remote utility, and finally for Life Entertainment. The latter is useful in that it allows personal data on the phone to be synchronised with the PC, such as personal contacts or calendars. Furthermore, users can gain access to the internet by simply using the 3G signal on their phones, all that across the Bluetooth connection. BT Turbo remote is akin to RC TweakIt in that it allows voltages and clocks to be monitored or tweaked remotely. The main difference is that RC TweakIt does the whole process through the iROG chip on such motherboards to alleviate latency issues and to reduce CPU loads during intense overclocking sessions. BT GO acts through the CPU and thus produces a small load. While that isnt an issue for mundane media tasks, it can affect benchmarking sessions at high clock speeds.