👤by Sahil Mannick  Comments 📅14-11-10
ASUS Maximus IV Extreme (ROG)
ASUSs line-up wouldnt be complete without their flagship Republic Of Gamers boards ruling the roost. Avid Vortez viewers will be familiar with the range of ROG branded motherboards we have tested here so you will no doubt know that they represent the most premium ASUS motherboards in both price and performance. The ROG brand is sub-divided into three categories; Extreme (targeting overclockers), Formula (targeting gamers), and GENE (targeting LAN party gamers). The board on display today is the Maximus IV Extreme, representing their flagship board on the P67 line-up. 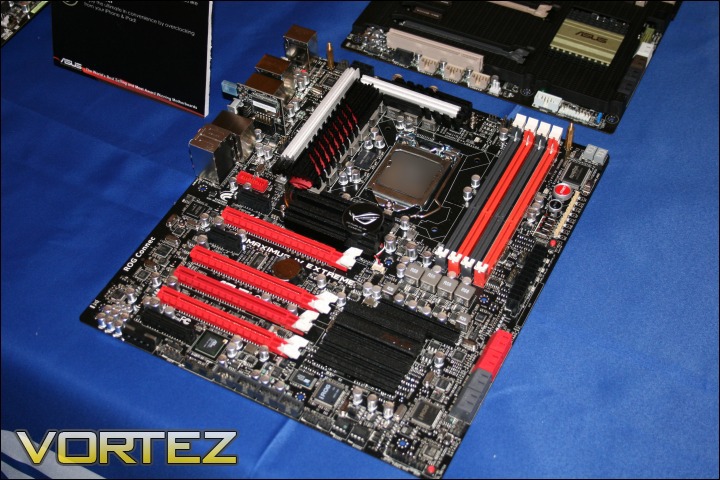 The Maximus IV Extreme follows the trend of previous ROG Extreme and packs all the features we have been accustomed to seeing including ASUS Probelt, EZPlug, LN2 mode, RC Bluetooth, Extreme Engi DIGI+, ROG Connect, PCIe x16 lane switch and a vast range of new additional features. The red and black theme has been kept to differentiate the line-up from the mainstream but the heatsink theme is now Star Trek, representing ASUSs Design for Future concept.
The motherboard contains a lot of features that we have previously covered in great depth so this section will focus mostly on their new innovations. The Maximus sports 4 PCIe x16 slots, 2 PCIe x1 slots and one PCIe x4 slot. The absence of a PCI slot is down to ASUS getting rid of legacy ports. For this reason, there is only support for USB 3.0 ports on the I/O panel, through 2 NEC controller chips. Typically each chip provides support for 2 USB 3.0 ports but ASUS have opted for a controller hub for a total of 8 USB 2.0ports. The Maximus IV Extreme will be 12 inches x 10.6 inches (30.5 cm x 26.9 cm), 1 inch wider to accommodate the features surrounding the 24 pin ATX motherboard connector. The board will still use standard ATX mounting holes so it should be compatible with most ATX cases.

Brand new ROG features that we can expect on the Maximus IV Extreme are GPU TweakIt, GPU/ DIMM post, ROG iDirect and ROG BIOS Print. Those who have read previous ROG motherboard reviews will know that they sport an extra USB port at the back for ROG Connect. By simply connecting the bundled cable from the port to a Windows based laptop, the RC TweakIt software can be used to remotely overclock or monitor the motherboard. ASUS have now expanded on its functionality by adding GPU support so users can overvolt/overclock their GPUs remotely as long as they are on the supported vendors list. Fan control functionality will come over time. Another method of overclocking is of course by running RC TweakIt on a compatible phone via Bluetooth. The advantage of the Bluetooth module over the dongle solution is that it passes through the iROG microprocessor, thereby not creating a load on the CPU itself when overclocking. This is ideal in extreme benchmarking sessions where a small load spike can cause instability. One complaint on release was the lack of iPhone support but brace yourselves because its finally coming! And because iPhone owners are inherently special, the feature had to be given its own name, ROG iDirect. If that wasnt enough, the iPad will be fully supported as well. The previous lack of support is because Apple limited Bluetooth control on their hardware so extra software was needed to tackle the problem. The disadvantage compared to using other phones is that running RC TweakIt will create a 1% load on the CPU. The utility will be available through the App store.

GPU/DIMM post is a new ROG feature which, as the name implies, detects whether the graphics card and memory modules are operating in BIOS. In conjunction, the board has PCIe x16 lane switches that can turn off/on to identify faulty graphics cards. 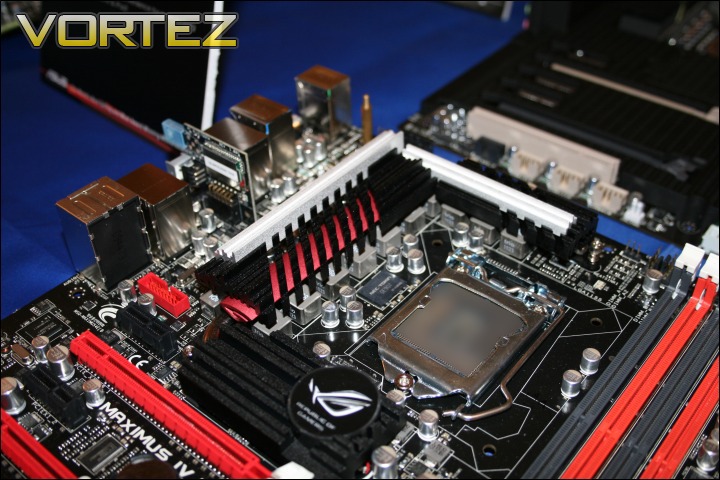 The heatsinks on the Maximus IV Extreme doesnt look as robust as that found on the Rampage III Extreme of Crosshair IV Extreme but its probably due to the lack of necessity. The Star Trek design concept utilises a multi-layer structured fin array and a curved red aluminium strip on the MOSFET heatsink.
Extreme Engi DIGI+

The Maximus IV Extreme features the Extreme Engine DIGI+ VRM circuitry, a hybrid digital and analog VRM design for lower switching delay and better accuracy. Unlike the DIGI+ VRM on the mainstream board, the switching frequency can range from 250-1000 kHz for improved stability at the lower end and improved overclocking headroom at the upper end. The board delivers 8-phase power to the CPU as indicated by the 8 alloy chokes which can maintain inductance at 40A unlike standard ferrite chokes. ASUS also claim that the FET+ in metal packaging offers 1.3x faster heat dissipation, 40%+ better conductivity. Lastly, we can also see the use of a NEC Proadlizer, first seen on the Gigabyte SOC graphics cards. The capacitors provide current capacity of up to 5000microFarads and extremely low ESL/ESR for super overclocking ability. Low noise ensures stable power delivery without voltage spikes. 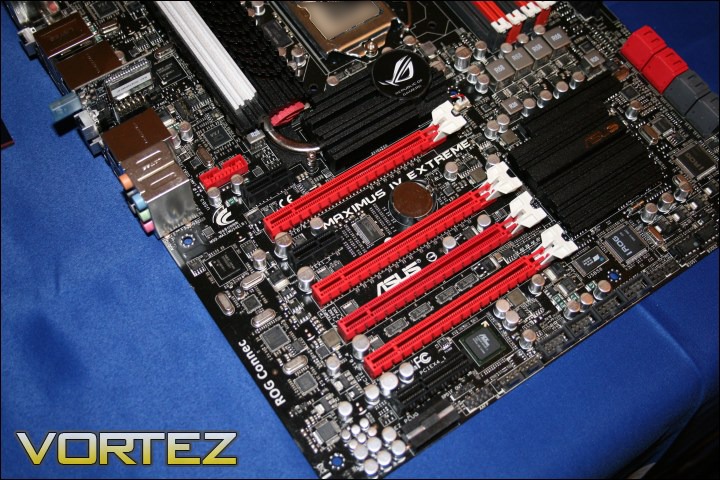 The Maximus IV Extreme has 4 PCIe x16 slots but the lane configuration is still unknown. It is very likely that an NF200 chip has been integrated for more PCIe lanes. The PCH is cooled by a low profile heatsink and to the right are 8 SATA ports, 4 of which are 6Gbps based on the colour. Two of those are natively supported through the chipset whilst the other 2 are likely to be from a Marvell controller.
ROG Thunderbolt

ASUS are working on a new project currently codenamed ROG Thunderbolt, which incorporates two of their least talked about features, ROG Gamefirst and their on-board sound solution. The primary target is gamers who want good sound quality in game and lower latencies for the best gaming experience out of the box. This is achieved through the network processing unit, which can regulate packets and latencies based on usage, and the sound card, most likely a VIA or Realtek chip using the X-Fi Codecs. 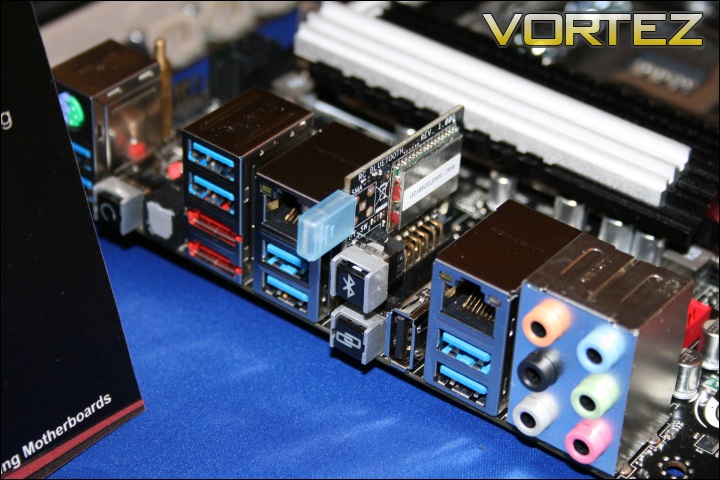 On the I/O panel are 8 USB 3.0 ports, 2 e-SATA ports, 1 PS/2 port, dual Gigabit LAN ports, 8 Channel audio, an optical S/PDIF Out port, an ROG Connect port & switch, a clear CMOS button and RC Bluetooth module. The ROG Connect button also doubles up as the USB BIOS flashback button where users can simply plug in a memory stick containing the BIOS ROM and press the button to proceed with flashing. 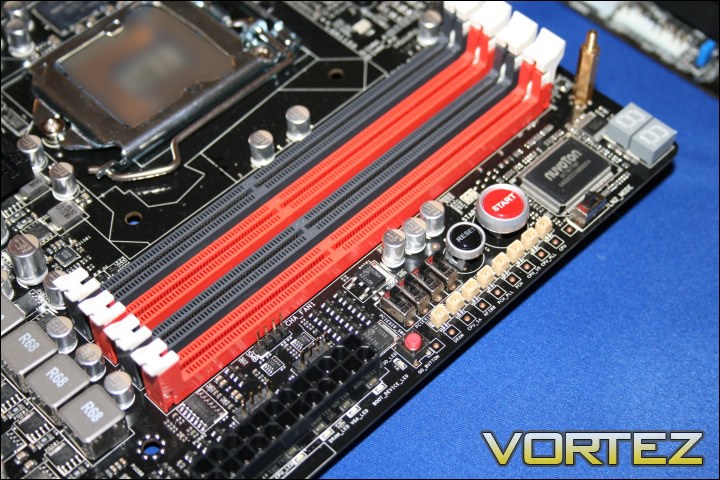 In the area surrounding the 24 pin ATX motherboard connector, we can see a Start/Reset button , the Probelt probe points for voltage readout using a multi-meter, the PCIe x16 lane switches, the Go Button to load up BIOS profiles instantaneously, the Q-LEDs and a Debug LCD. For more details on the individual features, check our previous coverage here.