👤by Sahil Mannick  Comments 📅14-11-10
ASUS P67 Sabertooth (TUF)
The ASUS TUF branding is a new series of motherboards first introduced on the P55 chipset and represents their professional solution. As the name suggests, the series offers tough (see what they did there those clever ASUS marketing people), stable, reliable and durable products to meet the demands of professionals who require the most robust motherboards to cope with harsh operating conditions. The Ultimate Force (TUF) series slots between the mainstream and premium segments, delivering high quality components and performance at a mid-range price point. Where it does fall short is in its feature set, which isnt as rich as those offered on ASUSs other boards. Considering the target market and user demand for substance over style, the TUF series is an excellent compromise. 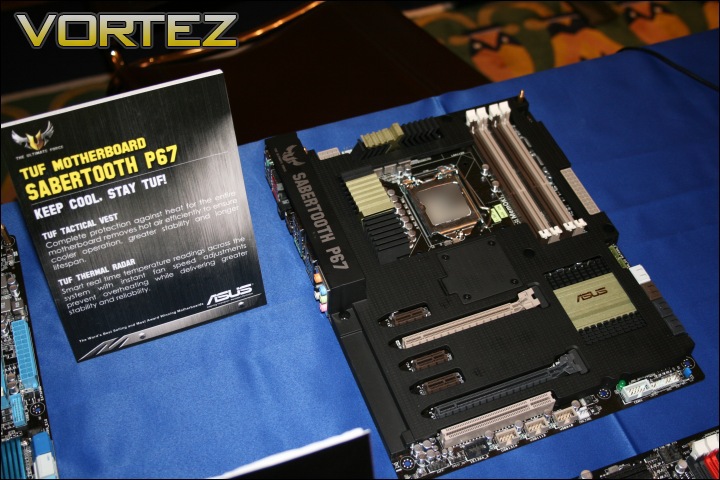 The P67 Sabertooth has a very distinct style, using a military brown, green and black combination of colours to portray its rugged appeal. The Tactical Vest is a unique feature that sets the board apart from the rest but also aids in cooling.
The Sabertooth will be making its next transition on to the P67 platform and initial observations are very promising. To cater for the harsh conditions under which it was designed to be used, the motherboard has undergone server grade reliability tests adhering to Military standards. What it means is that the board has to handle more extreme ambient and load temperatures. To achieve this, higher grade components with higher operating temperatures and durability have been employed. Testing involves thermal shock tests during which temperatures change dramatically in short periods to fully stress the motherboard. As standard, the Sabertooth comes equipped with alloy chokes, similar to those found on the ROG boards.

The Tactical Vest is the plastic cover that covers the entirety of the motherboard apart from the ports and connectors. The purpose is for thermal protection despite its plastic construction. The vest also spans the backside of the motherboard. It has been designed to work with downdraft coolers such as the Noctua NH-C12P SE14 such that air is pushed down through the vents and shafts below the cover. Those help direct airflow away from the board in all directions. While it may not seem like an intuitive idea, it proves efficient in situations where airflow is limited inside a chassis. 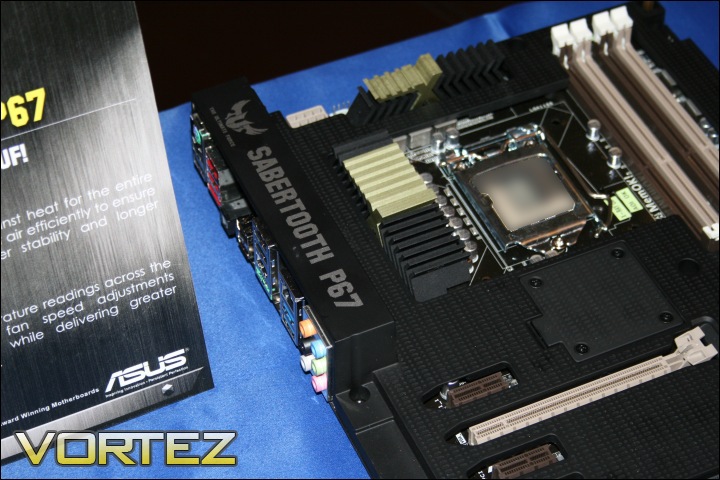 Even the I/O plate is covered with the Tactical Vest with the Sabertooth logo and name proudly displayed on top. Just below the CPU area is a small removal plate on to which a fan can be attached for additional cooling. All the relevant components and connectors poke through the vest so everything is still easily accessible.
TUF Thermal Radar

Another innovation is the TUF Thermal Radar. Nine on-board thermal sensors are situated around the board and monitor crucial component temperatures such as the CPU and RAM area. ASUS have developed an intuitive GUI so users can visualise those parameters in Windows and an integrated Fan Expert application can control fan speeds to regulate temperatures. At the moment, Thermal Radar remains a prototype but the idea is certainly a very good one.

The concept of the Sabertooth motherboard is a complex one to understand. Its targeted towards professionals and server workstations, and certainly has the capabilities for such situations but the colour choice, and slightly gimmicky TUF marketing might repel potential buyers. We only have to look at the Sabertooth X58 to realise that it has ended up competing with the similarly priced P6X5

-E. For a true evaluation, we will have to wait till launch.