NVIDIAs 2nd generation RTX architecture codenamed Ampere was unveiled to consumers on September 1. Extensive adjustments to a variety of elements such as RT cores, Tensor cores and shader units are just a few of the improvements, along with the support for the very latest GDDR6X which boasts double the throughput of GDDR6, with memory bandwidth operating at an impressive 19Gbps  a joint development between NVIDIA and Micron.

Of NVIDIAs flock, the RTX-30 Series is also the first to embrace PCIe 4.0, which for the moment is only available via AMD motherboards/platforms. Since NVIDIA and AMD graphics card series now utilise such a standard, weve recently upgraded our GPU test system to the AMD X570 platform, along with AMD Ryzen Gen 3, so were now bang up to date.

For countless years weve worked closely with NVIDIA and have reviewed various generations of their graphics cards for day 1 launch but unfortunately this time round, we werent afforded such a privilege, hence the lack of Founders Edition coverage.

In the weeks that followed ASUS has stepped in and kindly sent over one of their new RTX 30-series models, so wed like to express a huge thanks to the team!

In the spotlight today is the ASUS TUF RTX 3080 OC, a graphics card featuring the very latest GA-102 ampere GPU. The team at ASUS has applied a factory OC , nudging up the frequency of the GPU Boost Clock by 100MHz. This TUF model also arrives with the renowned Max Contact thermal solution and a triple helping of axial-tech cooling fans.

Should you have this RTX 3080 on your radar? Read on to find out! 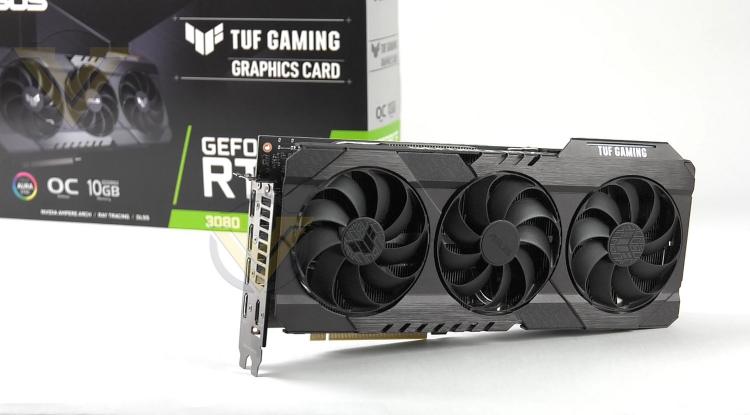 ASUS on their TUF RTX 3080
The TUF Gaming GeForce RTX 3080 has been stripped down and built back up to provide more robust power and cooling. A new all-metal shroud houses three powerful axial-tech fans that utilize durable dual ball fan bearings. Fan rotation has been optimized for reduced turbulence, and a stop mode brings all three fans to a halt at low temps. Beneath, independent heatsinks for the GPU and memory keep thermals under tight control. Additional features, including TUF components, Auto-Extreme Technology, a new GPU bracket, and a backplate vent make the TUF a proper powerhouse. For builders looking for a new old faithful, this card has your back.

There are currently 233 user(s) online:
Google