Call of Duty is a franchise that needs little introduction. Each episode in this exciting saga seems to scoop up multiple awards every year it features, and if there were awards handed out for the most anticipated game of this year Modern Warfare 2 would win  hands down.

The hype surrounding MW2 can be easily seen in the first day of UK sales for example. An estimated 1.23 million copies were sold fetching a rather cool £47m.

The single player story picks up five years after the original Modern Warfare game. In similar fashion to COD4 you are embodied in various characters throughout the missions finding yourself in destinations such as Rio de Janeiro, Moscow, Afghanistan and Washington D.C.

The reason for being in such a variety of places is because a global conflict scales all these places with the Task Force 141 having to combat the ultranationalist terror groups. You do find yourself in one part of the world one minute and another the next minute and this is really where things get confusing. Rather than engaging in a plot and allowing the story to develop and the player to become fully involved, the enactments in MW2 make you feel like you are in a dramatic rush as you are whisked from place to place. It's unfortunate that this is so. There seems to be very little flow to the storyline, for example the particular mission that springs to mind is the notorious airport incident to which players are initially prompted whether or not they wish to take part in because of the extreme scenes of violence and rightly so. Not only is this mission completely out of synch with the storyline its also unnecessary. Walking into an airport and massacring an airport full of innocents is in my own mind distasteful, it makes no sense whatsoever. This scene is also placed amongst the first set of missions, and could well put some off.

Both Call of Duty 4: Modern Warfare and Call of Duty 5: World at War's storylines follow similar suit by jumping into the role of another soldier, and it works very well in these games but in Modern Warfare 2 the frequency of this change leaves you feeling lost and almost disconnected from the emotion that should be felt. 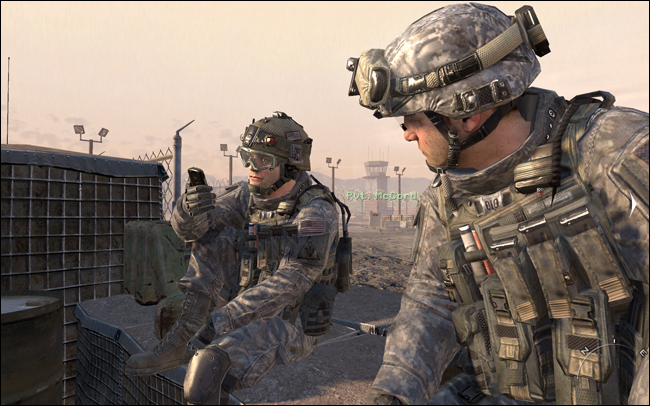 With these negative comments put forward, the missions can be enjoyed and when you aren't being carted off onto the next missions you can enjoy some intensive action with your teammates.

Inside each of the missions you will find a nice variation of gameplay including a vast array of complimentary weapons. There are roof-top assaults and stealthy operations in the snow, fast-paced pursuits on skidoos and helicopter undertakings in the dead of night. It's great to see that Infinity Ward did not shy away with the great variation in gameplay and were happy to adventure and explore the limits of all that the FPS world can offer. Rarely does a game feature so much difference in action.

The one thing that will amaze with MW2 is just how fantastic it looks. The engine that Infinity Ward have used makes the characters and gaming world seem really photo-realistic. The textures are truly amazing, to date this is one of the most visually pleasing games to come to the PC. Not only does the graphics amaze but the audio is also something to speak highly of, the voice casting features actors such as Lance Henriksen and Barry Pepper. To the senses, this game is presented very well and this will appeal to FPS gamers out there.

A word of warning though, installing the game can take a seriously long time. On the system that I installed MW2 on, it took around 50 minutes. Some systems may take longer.