👤by David Mitchelson  Comments 📅03-03-11
Military Class II
MSI had a great deal of products at CeBIT 2011 and we were shown around by a very enthusiastic representative. Including motherboards, graphics cards and laptops.

The big push for MSI this year is Military Class II. Which if you havent heard of, is a brand exclusive. Many manufacturers classify their products as being military tested, military standard. The truth is that this only applies to certain components such as capacitors when we are talking motherboards. Only certain aspects are tested to military standards with other brands, but with MSI the entire board is military tested, not only the capacitors or specific components. 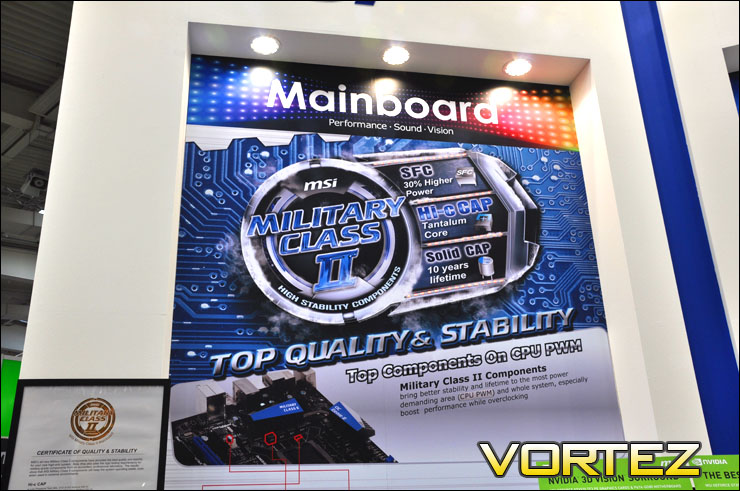 MSI proudly had on their wall a certificate of quality and stability. This certificate was awarded a matter of days ago and clearly shows that MSI are keen to set themselves apart from competitors by going one step further ensuring unrivalled quality in almost every aspect of their motherboard manufacture. All motherboards now feature the following 3 high quality components:

NOTE: Hi-c CAPs (Highly Conductive Polymerized Capacitor) are used by NASA on their spacestations. The polymer is a self repairing substance  MSI actually spoke of a technician who thought he had damaged the board sent it back for RMA but by the time it arrived with RMA department it had healed itself.

MSI were showcasing their latest Sandy Bridge motherboards which all feature the above 3 components as standard. Below you can see the new Z68 chipset motherboard that is shortly to be released. This board combines the excellent performance from P67 and video output from H67. 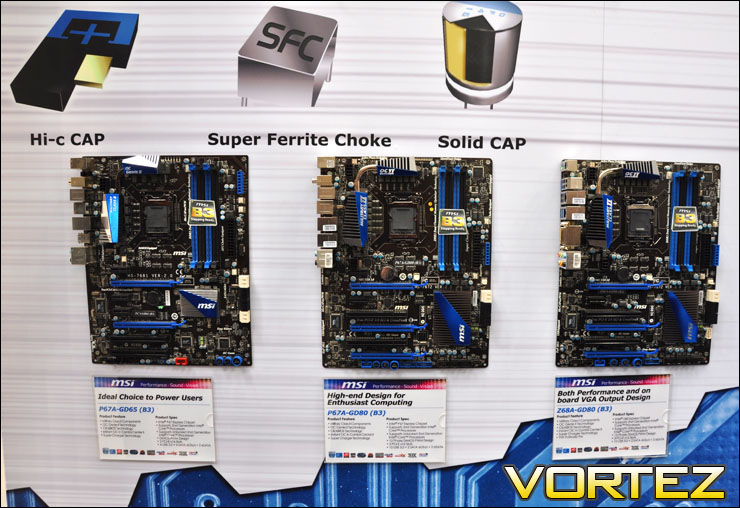 There are currently 806 user(s) online:
Google