OCZ ruled the proverbial SSD roost for much of 2011, but as our viewing of their booth at CeBIT this year proves they certainly aren't resting on their laurels. Instead, they took the opportunity to show off some new products sure to interest those with enterprise-level storage requirements, or the more modest requirements of the average PC enthusiast. Of particular note is the movement towards Indilinx and Marvell controllers over Sandforce, the brand most often seen in their performance range over the previous year.

Included amongst the new products were the fourth generation of the Vertex, the Kilimanjaro platform, the new Chiron SSD with up-to 4TB capacity and the Thunderbolt-enabled Lightfoot. 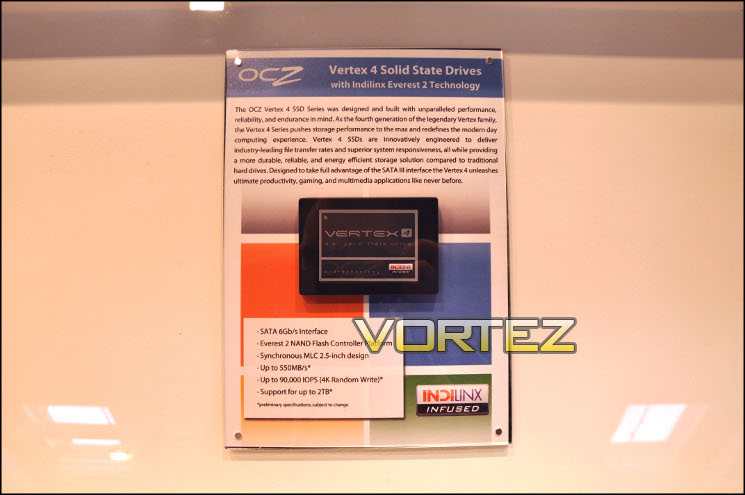 Continuing the well regarded Vertex line, the Vertex 4 is OCZ's latest Performance/Enthusiast 2.5" form factor drive with SATAIII interface. Unlike previous generations however, the Vertex 4 moves from Sandforce to an Indilinx Everest 2 flash controller, capable of 550MB's Read, 500MB Write and 90,000 IOPS according to preliminary specifications.

Featuring up to 2TB of NAND storage in a 2.5" form factor, the Vertex 4 looks set to push the price/performance/capacity barrier out further in Q2 of this year. 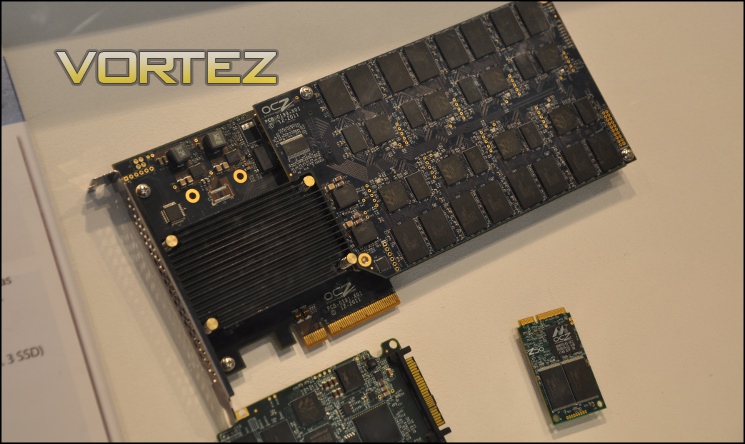 OCZ claim Kilimanjaro - a collaboration between OCZ and Marvell - to be the "Worlds first modularly scalable native PCIe SSD controller paired with a sophisticated combination of software and hardware (OCZ Virtualized Controller Architecture 3.0)". The platform will be available in a wide range of form factors and offer unparalleled performance: full and half-height PCI Express supporting up to 2.5 Million IOPS and 7GB/s; 2.5-inch supporting 100k IOPS and 1GB/s; and Mini PCIe at 50K IOPS and 500MB/s. Storage for the platform caps out at 12TB with power fail protection and MLC, eMLC and SLC NAND Flash Options.

OCZ's Z-Drive R5 - based on the Kilimanjaro platform - promises to be the worlds first PCI Express Gen 3 x16 SSD. The card makes use of Marvell's native PCIe-to-NAND flash controller, eliminating the need for a separate storage controller and hence reducing cost to deploy in data centres. OS compatibility is high: Linux, Windows Server 2008, OSX VMware ESXi and ESX all support the platform ensuring reliable use on a wide range of systems and servers. Performance figures of 2.5 Million IOPS and 7GB/s with an up-to 12TB capacity strongly define the enterprise-level SSD solution.