👤by Simon Green  Comments 📅24-05-10
Testing and Performance
To test the thermal performance of the various notebook coolers we have today I have used two different dual-core laptops (for reasons which will become apparent later on...) and tested each using Prime95's torture test to give temperatures when under full CPU load, and also at idle for comparison.

I decided to graph only CPU Core temps as they were very indicative of overall thermal performance and the additional sensor information recorded by Everest (motherboard and GPU) gave no added benefit or insight to the results  also in the spirit of keeping the results easily understandable.

The laptops used for testing were: 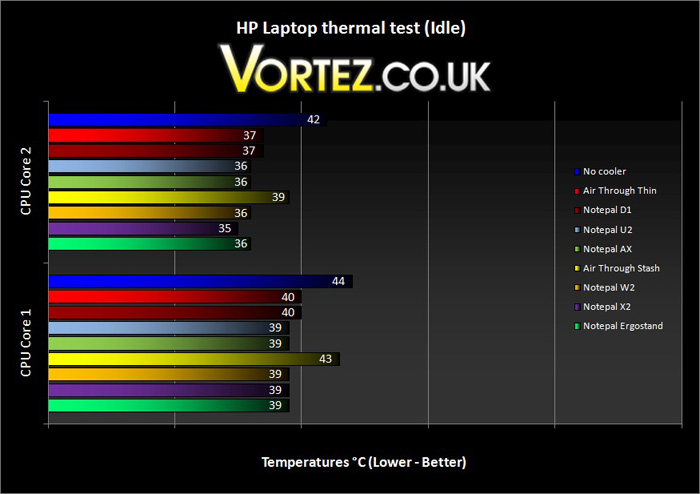 Results for HP laptop at idle

At idle the HP laptop was cooled pretty effectively by all the devices tested here today, showing a loss of between 4 or 5 degrees with one exception  the Air-Through Stash which only managed to reduce temps by a degree or so. Possibly an issue with airflow due to where the single fan is placed as it was the only notebook cooler with such a small single fan. 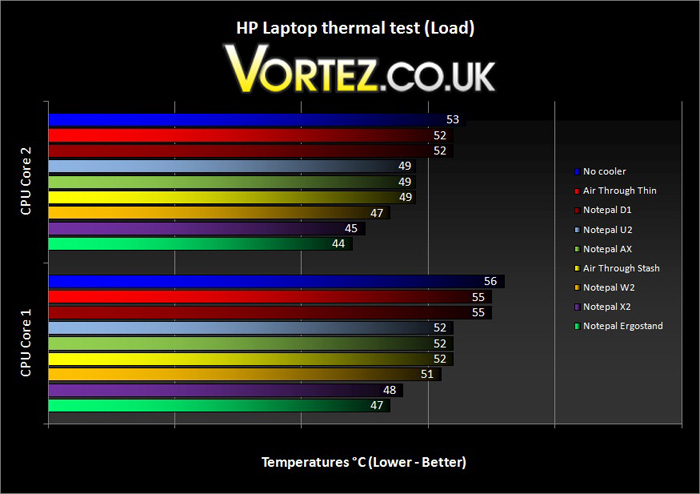 Under load the HP begins to show weaknesses in the coolers  some are clearly struggling to cope with the added heat load, but this time it's the Air-Through Thin and Notepal D1 which are the poorest performers. The Air-Through Stash on the other hand is keeping up admirably with the middle field, but by far the winners here are two of the Cooler Master offerings  the Notepal X2 and the Notepal Ergostand  both equipped with that massive 140mm fan, so no real surprises there! 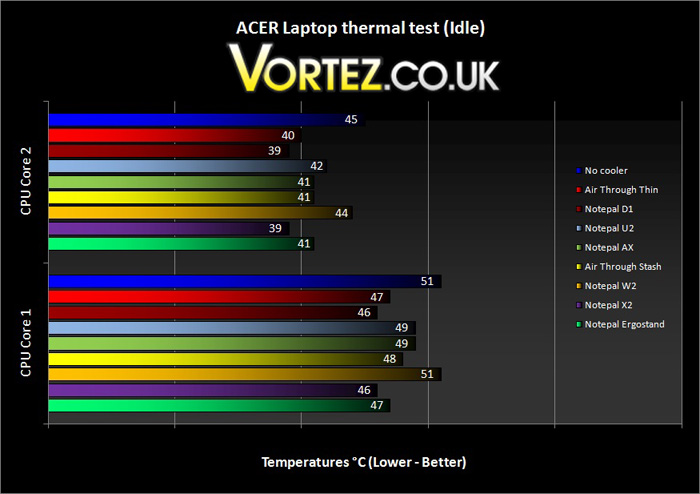 Results for ACER laptop at idle

At idle the ACER laptop was a real mixed bag! I initially did the testing with just this laptop and it was due to these jumbled results that I decided to add in the HP one as well to give some more depth to the results and to try to make sense of what I was seeing with the ACER.

All of the coolers managed to reduce temps somewhat, getting between 1 and 6 degrees reduction which isn't bad when at idle  although clearly the Intel Core i5 CPU is far hotter running than the 3 year old AMD Turion chip! The winners here were the Notepal X2 (that big fan again...) and curiously also the Notepal D1 proving that airflow in the right place is as important as lots of it! 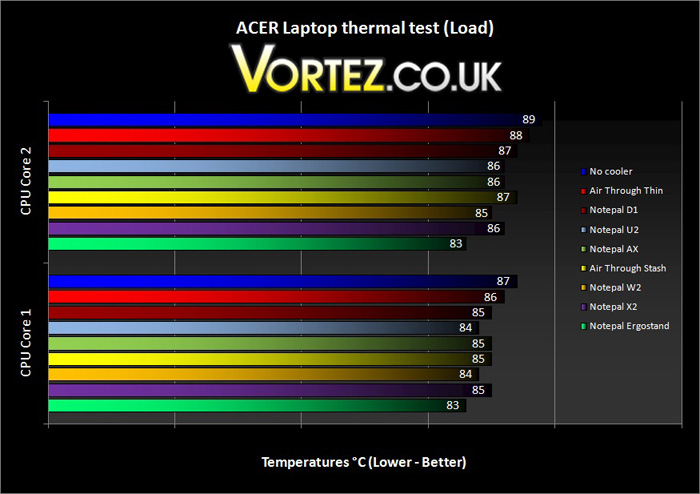 Under load the ACER's Intel Core i5 chip uses its hyper-threading(HT) to give a total of four threads and it kicks into its turbo mode too  so now these coolers are having to cope with the equivalent of 4 cores running at 2.66GHz (I did try using just the two physical cores at the full turbo of 2.93GHz, but found that leaving all settings on auto and using HT gave the highest temps and so was the most stressful test). Here we can clearly see that the playing field is evened up again as the added heat load simply overwhelms the bulk of the coolers, even the mighty Notepal X2 which has fared so well is losing the fight here  only the Notepal Ergostand is still battling the heat well, and even then it's only achieving a 4 to 6 degree reduction in temps, a fair bit less than it managed with the HP laptop. The bulk of the full-sized coolers do manage to reduce temps a little so are clearly still having some effect, and this test is pretty extreme so you wouldn't expect for a cooler to face these conditions day in day out!