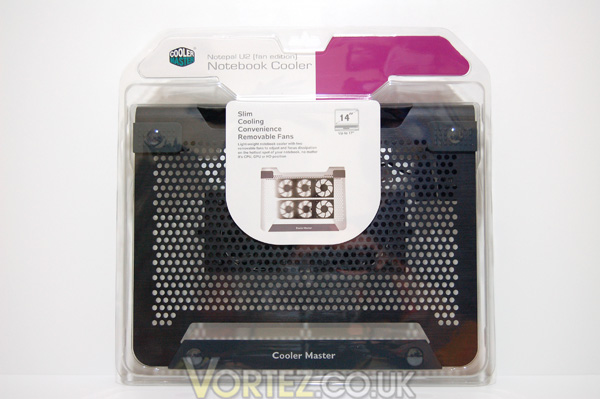 As you can see the Notepal U2 is shipped in a clear plastic clam-shell blister which is a much smaller overall package than any of the boxed ones we received to test  perhaps due to its metal only construction Cooler Master decided it needed less packaging materials. It was easy to open without needing any cutting as it didn't have the 'welded seams' that most of the purely plastic covers seem to favour these days, instead just being secured by several strips of tape. It looks as though the unit may have 6 fans from the card on the front, but in fact there are only 2  the card is showing how they are removable and can be mounted anywhere to achieve the best cooling effect for your notebook. 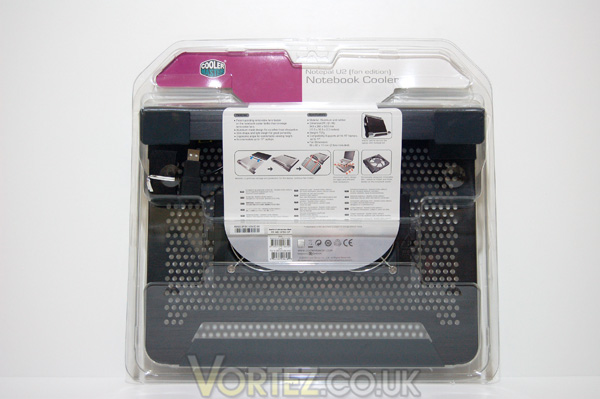 The rear of the packaging has the usual Features and Specifications details as well as a sequence of pictures showing how the included fans detach from the unit allowing it to be used as a carrier for a notebook with an included elasticated strap to help secure the notebook inside the unit, as shown by the following detail.

Using the Notepal U2 without fans as a notebook carrier 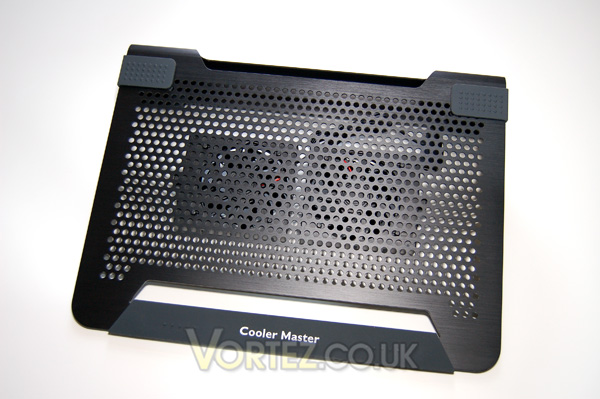 From the front it is clearly evident that this is meant to be a very sturdy yet stylish device. The all metal construction gives the Notepal U2 incredible strength and the large rubber pads at the rear edges have a dimpled surface to give additional grip for notebooks between 14 and 17 in size. There is another large rubber area on the front of the unit which wraps around the bar so that it can be used as a handle when carrying as well as giving excellent grip both to the front of any notebook and to the desk surface below. The angle of the unit is again very comfortable for prolonged use.

Notepal U2 underneath  removable fans

From underneath you can see the two 80mm fans which are rated at 2000rpm and are encased in plastic holders which are fixed to the mesh surface of the Notepal U2 by little catches. There is a small button on the side of each fan which when pressed releases the catches and allows the user to reposition the fans at will  note though that the fan cables join to a single wire which then terminates in a USB run-through connector, so the fans cannot be used on their own.

In use the Notepal U2 was very comfortable  the rubbers gripped both my laptops perfectly and allowed for no slipping or movement at all, and the angle of the unit is just right. It seems that Cooler Master must have a set of standard dimensions that they work to with these things and why not? The fans were again pretty much completely silent so I doubt that the lack of any speed control would be a major problem. I did try using the Notepal U2 as a carrier and it is relatively successful  the rear rubber grips go right around the inside of the 'U' formed by the back of the unit and so they do grip the back of the notebook quite well. I just wasn't convinced about relying on a simple elasticated strap to secure my precious notebook to the handle end of the carrier... and add to that the fact that the fans need to be removed first (and hence carried separately from the main unit) and I seriously doubt that many will find this 'feature' to be of much use! Maybe it's best use would be as a protective enclosure if you needed to carry your notebook in any luggage other than specific notebook bags?