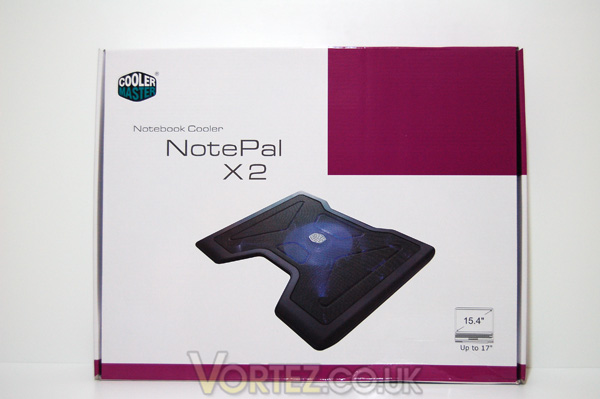 At first glance the Notepal X2 looks like the Notepal AX that we looked at earlier but with a redesigned plastic casing  it sports the same 140mm fan (along with those blue leds!), has basically the same overall dimensions, but has a much more metal mesh incorporated into it's surface so looks to have better cooling potential. The box front is pretty uncluttered as is clearly Cooler Master's theme for these devices, giving us a good product shot, the name and telling us that the Notepal X2 supports laptops of 15.4 to 17 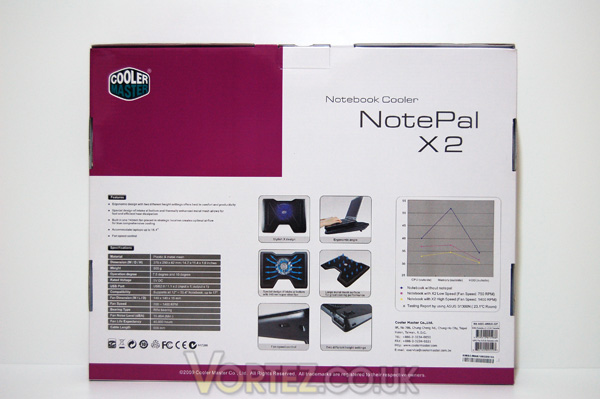 The box's back once again shows Features and Specifications, some pictures of details and showing projected airflow etc, and on this unit we also get a basic graph with traces showing the temps of an Asus S1300N notebook without any external cooling and with the Notepal X2  with its fan running at minimum and maximum speeds  so we are clearly getting a fan speed controller here. 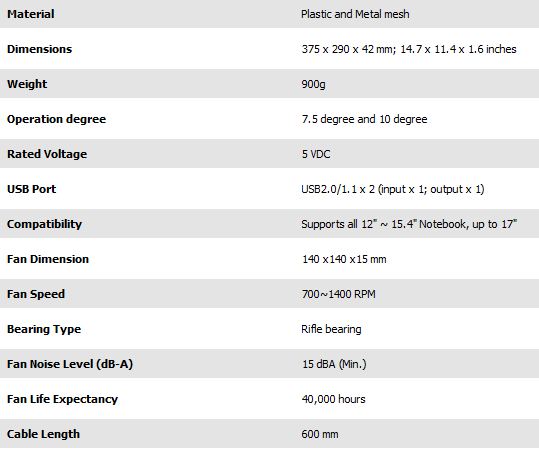 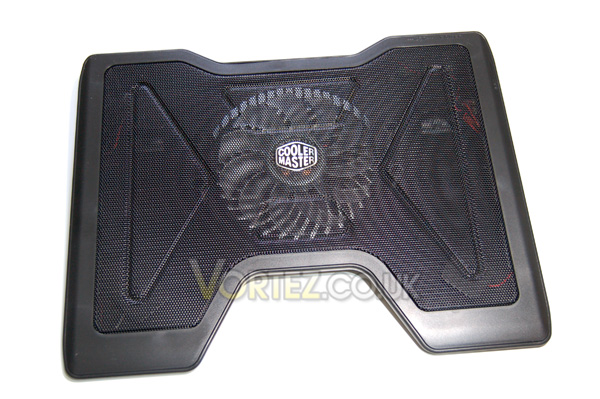 You can see that this notebook cooler means business  that huge 140mm fan lurking beneath the huge expanse of metal mesh certainly has plenty of cooling potential. There is unfortunately a lack of any rubber anti-slip pads again but hopefully the mesh will give a fairly grippy surface for the notebooks own feet to stick to, stopping any possible slippage. 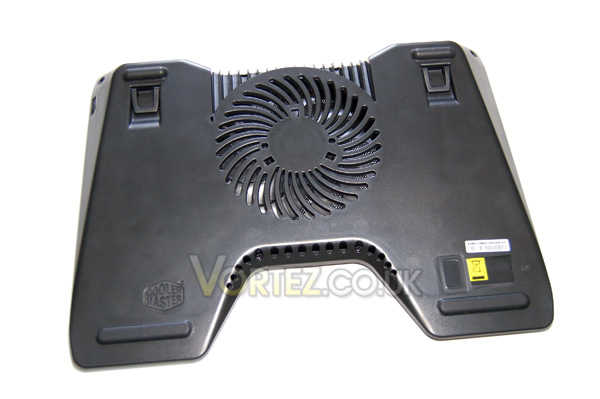 The most striking feature of the underside is the huge sculpted air intake which is specially designed to aid airflow according to Cooler Master. You can also see the huge vanes of the rear grille and there is also a number of smaller holes around the front edge of the Notepal X2 giving plenty of fresh air intakes. That 140mm fan will surely move some air volume! We can also see large rubber feet and once again we have the keyboard type risers for that added height if the default angle isn't to your liking. 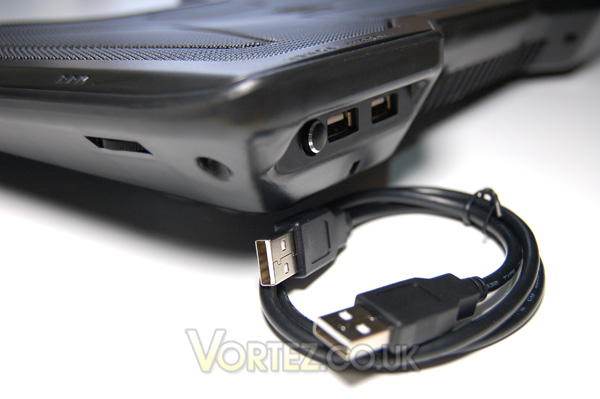 As is normal Cooler Master provide us with a USB cable for powering the Notepal X2, and that will take up one of the two USB ports you can see on the back of the unit alongside the On/Off button. Along the edge (to the left of the picture above) you can also see the fan speed adjuster wheel which will vary the speed according to your needs from the lowest setting of 700rpm up to the full speed of 1400rpm. 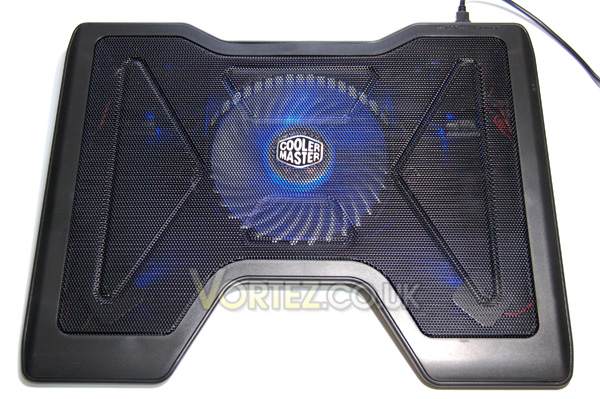 Blue LEDs again. And... No I still don't get it! I mean, your laptop is going to be sitting on top of this right? So, unless the idea is for some tiny amount of blue glow from underneath your laptop (only when you are using it in a darkened room though!) I can't see the point. At least LEDs are cheap, so anything spent on them shouldn't detract from cooling performance!

In use the Notepal X2 proved itself to be one of the quietest notebook coolers on test here today, and that is saying something as the others aren't exactly loud. Even when you are trying to hear this one, with the fan set at its lowest it is totally inaudible  at its highest there is a barely discernible noise which is more the air moving through that huge acreage of mesh than anything else! Excellent work there Cooler Master! The mesh surface is also surprisingly grippy and the lack of rubber pads didn't affect either of my laptops at all. The angle is just right too  I didn't need the extra height offered by the keyboard style risers, although I did try them and was also pleased to see that they don't affect the overall stability of the unit as a whole. The Notepal X2 is fairly large but with it's mostly plastic casing and rounded edges is small enough to be carried from place to place without too much effort. All in all a decent package with plenty of cooling potential.