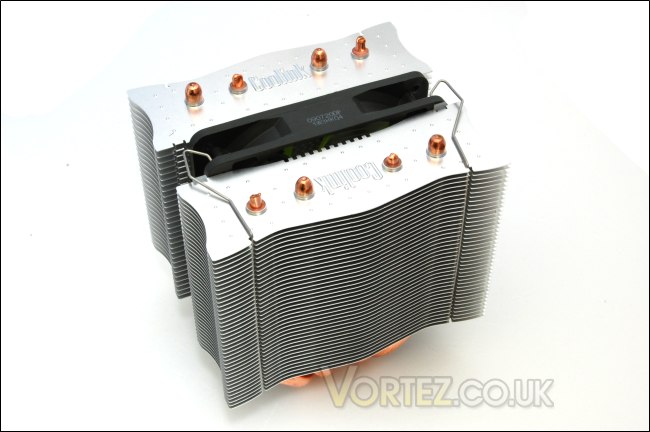 The Corator DS
The cooler is a very attractive design and the aluminium and copper construction makes for a robust cooler. Immediately we see many of the features advertised by Coolink such as the obvious dual fin stacks, the four heat pipes and the SWIF2 120P fan sandwiched between the radiators. We instantly get the feel that the cooler is aiming for sheer performance. To save costs, Coolink have opted against nickel plating their cooler. 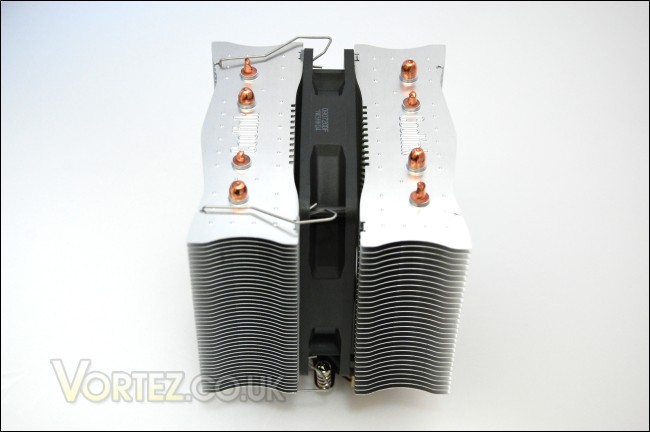 Sideshot of the cooler and the SWiF2-120P PWM fan
Looking at the side, we see the two radiators more clearly. In terms of size, it is very similar to the NH-D14 but the fin designs are very different. The fan is placed in the middle using 2 wire clips. They are very to install but there is one issue. To install the heatsink, the fan has to be removed first, but once installed inside the case, it can be very hard to access the wires to clip on the fan at the bottom. However, if you are installing the heatsink outside the case, then this is not a problem at all. The actual radiators are the same in size but have slightly different characteristics. 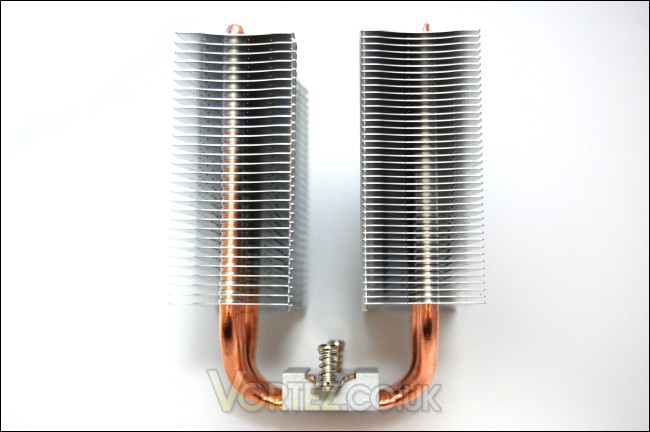 The asymmetrical fin stack using a 30/40 fin configuration
As we look more closely at the fins, we can see the asymmetrical fin array. By having one stack with only 30 fins and the other with a denser 40 fin array, Coolink aim to increase airflow when combined with the fan. The cooler has to be oriented such that the fan sucks air through the 30 fin array and pushes it through the denser stack. Because of this, the fan has to have a high airflow and static pressure, which it does with its high RPM operating speed and 11 blade design. This design is very efficient since the single fan can work more effectively pulling air through a less densely stacked array. The NH-D14 does not need the less dense fin array because the front NF-P12, with its high static pressure, acts as a "push" fan. 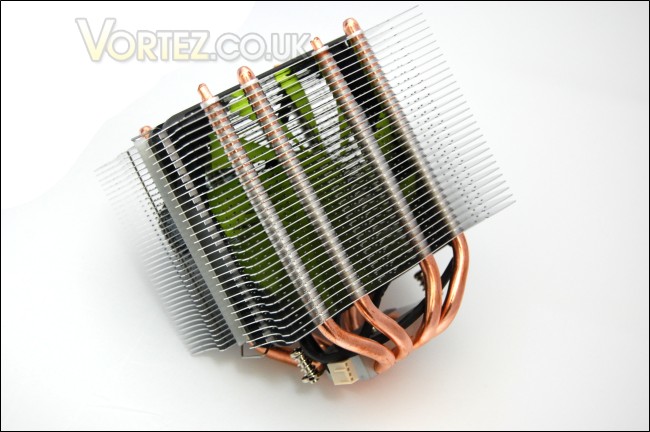 Looking at the fan through the fin array
The way the heat pipes are spread out within the fin stacks makes for a higher surface area for heat dissipation and all the pipes are exposed to the airflow. This is a more effective design than the Prolimatech Megahalem where the heat pipes are lined up in the direction of airflow so that only the front pipe ends up being exposed. The fan rests in the middle and we can see that it is oriented to push air through the denser fin array at the back. 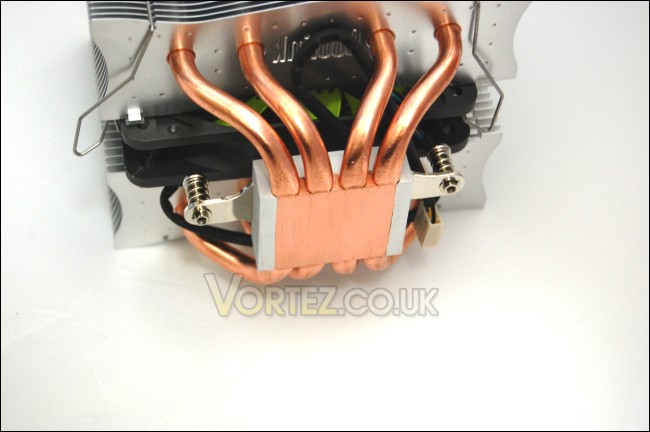 The base and heat pipes
The Corator DS utilizes 4 8mm thick heat pipes for maximum heat transfer. They all spread out from the base to cover a greater surface area of each fin. What is interesting is the base. The copper heat pipes are in direct contact with the CPU hence the Direct Touch Technology but unlike other iterations of this technology, Coolink uses a gapless design. One of the main downfall of other Direct Contact Technology is that there is normally a gap between the base of the heat pipes and the material that holds them together. As a result, the coolers can't make maximum contact with the CPU heat spreader, and when applying thermal, instead of applying a small blob that can effectively spread out under pressure, the pastes always ends up along the gaps. This always meant that special case had to be taken when applying thermal compounds and using thin lines along the base of each heat pipe was always necessary. However, Coolink's method means that the cooler faces none of the issues above. The base can be treated as a normal one with the benefits of Direct Touch. The base itself is fairly flat but lacks a mirror finish. 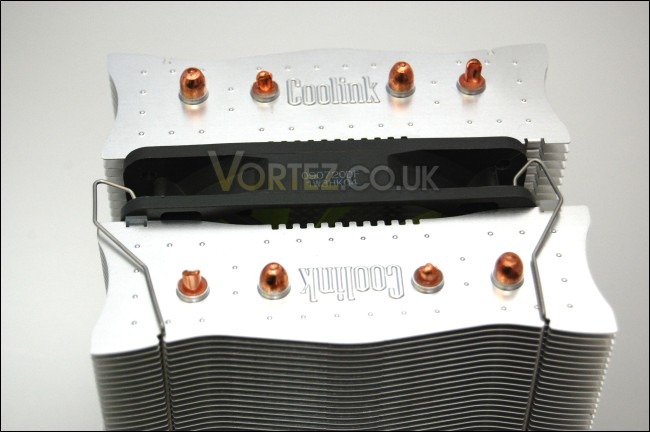 The top of the 4 8mm thick heat pipes
Coolink have opted for each end of the heat pipe to go through their own radiator. At the top of each stack are 2 rounded ends and 2 grooved ones. They are spread out across the top for more heat to dissipate radially. The powerful PWM fan is then able to carry the heat generated away from the radiators.