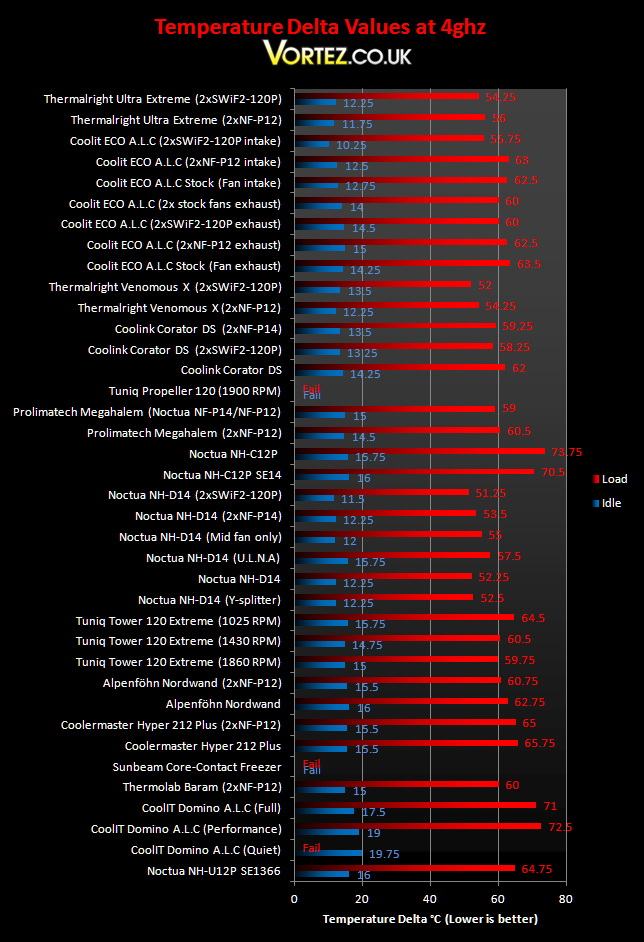 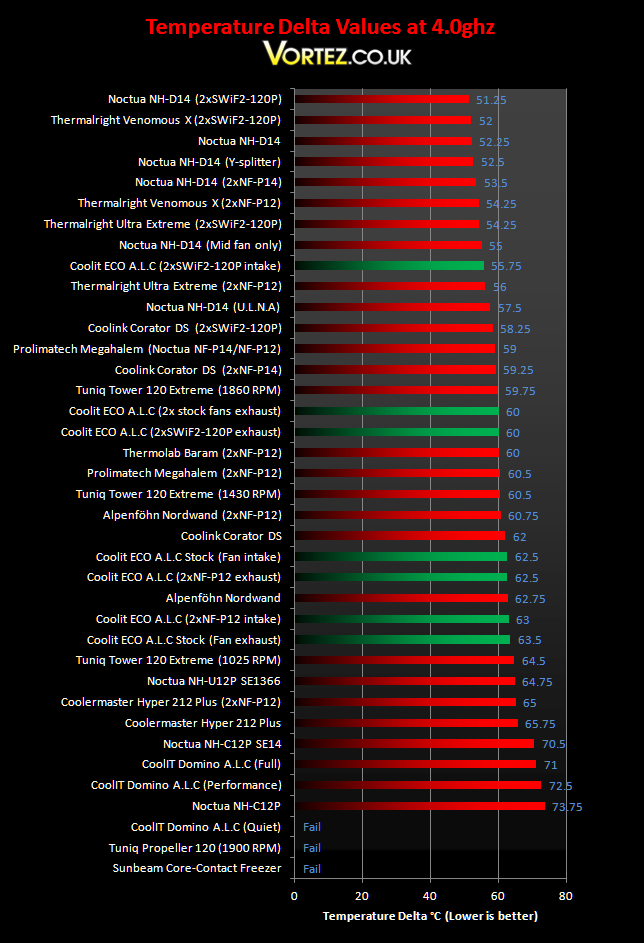 At 4GHz, the stock ECO performs much better than its predecessor despite the lower fan speed. It even outperforms the Noctua NH-U12P. However, it is outclassed by other air coolers such as the Alpenföhn Nordwand, which is cheaper and quieter. The bigger heatsinks are simply in a league of their own when compared to the CoolIT ECO. Its true potential shines through in a dual fan configuration. Using two of the stock fans, temperatures are lowered by 3.5 degrees, matching the impressive Thermolab Baram and Prolimatech Megahalem. This still doesn't put the ECO in the same league as the Thermalright Venomous X or the Noctua NH-D14 but given the size difference, we didn't expect it to.

Again we see some improvements with the fans acting as intake ones rather than the default exhaust configuration. With the single fan, the temperatures decrease by 1 degree but surprisingly with the two Noctua fans, the temperatures are slightly worse. The most significant change is with the two Coolink SWIiF-120P fans. As intake fans, there's a 4.25 degrees change that again pits the ECO against the likes of the Thermalright Ultra Extreme. However, the main problem with this setup is the adverse results on the motherboard temperatures. Instead of operating at the regular 50 degrees, the Northbridge temperatures shot up into the mid 60s.

Noise is one of the ECO's biggest downfall. At 1900 RPM, the fan was audible throughout testing. As you can imagine, running two of the stock fans was even louder. This was made worse by the fact that the two didn't run totally in sync with the use of the Y-splitter so every few seconds, constructive interference amplified the whirring noise. Both fans operated at around 1800 RPM whereas a single fan setup ran at 1900 RPM. However, the pump was much quieter and after the initial rush of liquid when the system starts, it was inaudible over the fan. The stock fans were more efficient than the Coolink SWiF2-120P, which despite running at a higher 1900 RPM didn't show an improvement. Two Noctua NF-P12 fans solved the noise problem but cooling was only slightly better than the stock system.