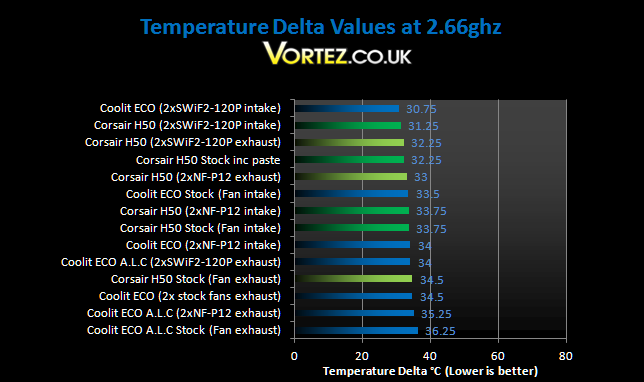 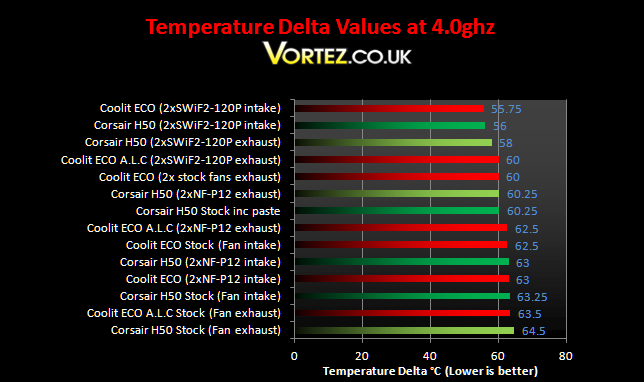 Looking closer at the Corsair H50 vs. the CoolIT ECO results, we get a better idea which is the best of the two and it's firmly the H50. Using the stock configuration, the H50's is better, especially with the fan in its default intake position. However this difference is marginal until we use a push/pull setup where the gains are higher on the H50. If we compare both when using the dual Noctua/Coolink fans, the H50 fares better and nets a lead of up to 4 degrees over the ECO.

Another test readers wanted to see were the exhaust vs. intake tests. We can safely say that Corsair's decision to use the fan as an intake was the right choice as reflected in the results. Using a single fan, they show that having it as an intake gave superior cooling potential both on the overclocked system and at stock. The same can be observed with the SWiF2-120P fan. Conversely, we see the opposite with the Noctua fans mounted. None-the-less, the H50 proved to be ahead CoolIT's solution throughout.

We now come to one of the major downfalls of the H50. Spinning at a veracious 1700RPM (1650RPM recorded on my motherboard), the fan isn't as quiet as Corsair market it out to be. It was definitely audible above my other case fans including the Scythe S-Flex 1600RPM. However, it was quieter than the CoolIT ECO. Corsair stresses that the stock fan has a good static pressure and the fact that the stock configuration was comparable to using two Noctua NF-P12s shows that this is indeed the case. To achieve the best results, the two Coolink fans were used but as mentioned before, it was not quiet at all! Unless the user normally wears headphones or regularly plays music, the noise will drive anyone insane. The pump on the other hand was close to being silent. Apart from the gurgling water from the initial rush of water through the hoses, the system itself was very quiet.

I have now added the results with the fans oriented as intakes on the CoolIT ECO A.L.C. Comparing apples to apples, the Corsair H50 lags behind the CoolIT ECO by 0.75 degrees and 1 degree in the intake and exhaust configurations respectively. This isn't surprising given the lower fan speed on the Corsair. With the two Noctua NF-P12 fans, the results are neck and neck showing that both systems are as efficient as each other and similarly with two SWiF-120P fans, the difference is only slight. As exhaust fans, the Corsair H50 still performs better with the Noctua NF-P12s and the Coolink SWiF-120P fans. On the whole, the new results demonstrate that the difference between the Corsair and the CoolIT solutions are not as clear cut as previously thought. Given both solutions in their default configuration, the H50 is still marginally ahead.

There are currently 441 user(s) online:
Google