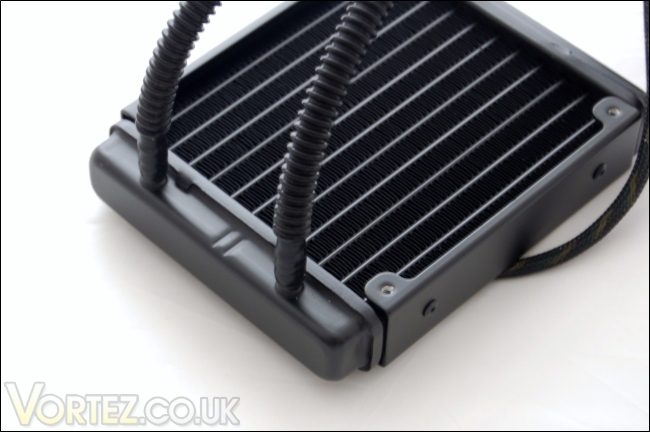 The hose fittings and reservoir
Here the tubing goes straight into the reservoir which is attached to the radiator for faster heat transfer. Instead of the larger barbs used in the CoolIT ECO, Corsair opts for smaller fittings. They are tough enough to withstand the high pressures and temperatures but lack the robustness of proper metallic barbs used in custom water cooling loops. The advantage of the closed loop is that users don't have to constantly maintain the system and the possibility of leakages through user error is minimised. The fluid used in the system is de-ionised water with a propylene-glycol additive to prevent corrosion of the components. 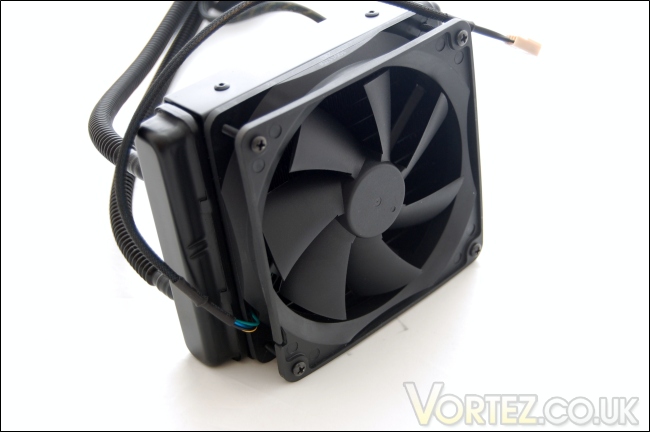 The H50 with the fan atached
The H50 comes with a fan that is designed to be mounted at the back of the radiator. Another major contrast to CoolIT's solution is the fact that the fan acts as an intake fan rather than an exhaust. The reason for this is that the fan will bring in cool air from the back to dissipate heat away from the radiator more efficiently thanks to a higher thermal gradient. The disadvantage of this is that the system mounts to the exhaust port in most cases so using the fan as an intake will prevent heat from escaping the case. If the user's case has exhaust fans at the top, then this isn't an issue. In my own case, my only exhaust bay was taken up by the H50 radiator so the only way heat could be pumped out was through the power supply at the top, which isn't an ideal solution. We will investigate later if changing the orientation of the fan will impact performance. The fan uses a 4 pin connector and runs at 1700RPM, 100 less than the ECO's fan. 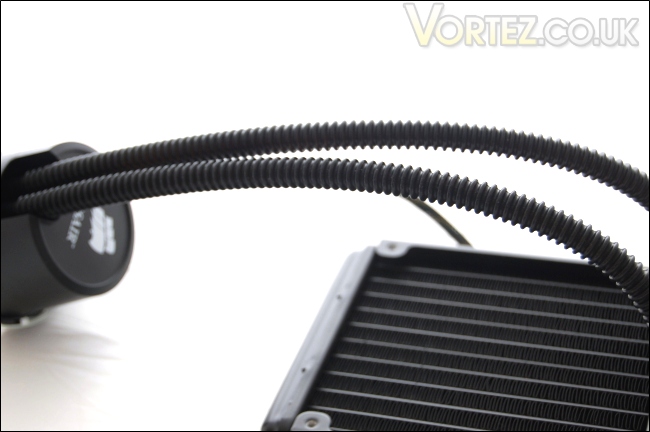 The tubing
The tubing is again very similar to the CoolIT ECO's but they are slightly more flexible on the H50. Being a system based on the Asetek LCLC, which was originally designed for OEM integration, Corsair promises incredible amounts of durability and reliability on their H50. Only two tubes are required thanks to the integration of the pump to the cold plate and the reservoir to the radiator. This minimises the possibility of problems arising and improves user friendliness. 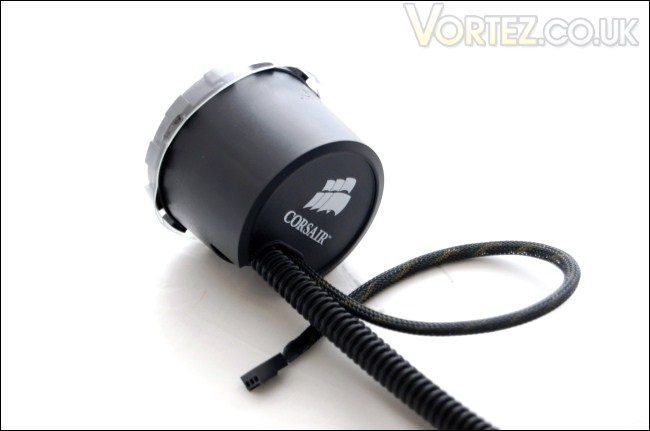 The pump
The pump on the H50 is integrated with the CPU block. The casing has a strong plastic construction with the Corsair logo printed on top for a sleek finish. This casing can be removed easily by unscrewing it from the base but it is not recommended. The pump itself uses a 3 pin connector that can be connected to the motherboard. Another neat feature of the H50 are the braided cables that again adds to the appeal of the H50. 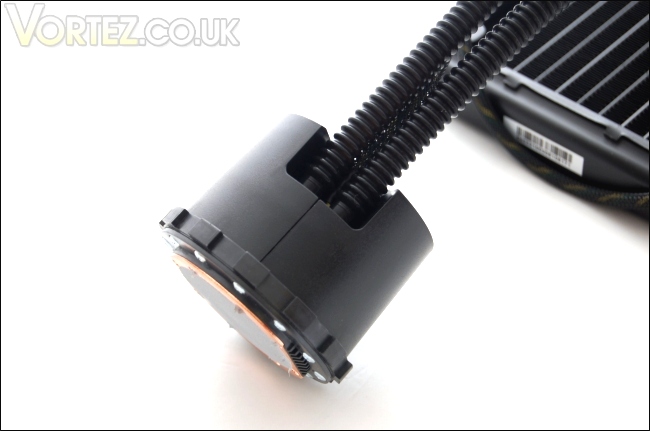 The cold plate/water block
The tubing runs straight to the pump and the fittings inside are similar to those found on the radiator. By having the fittings enclosed in the casing, Corsair ensures extra protection from damage. The base is a copper cold plate for maximum cooling performance and it comes with Shin-Etsu thermal compound pre-applied. The base isn't completely flat but instead has small micro-grooves similar to the base of the Noctua coolers we have tested here. The thermal paste acts as an excellent interface for efficient heat transport away from the CPU. 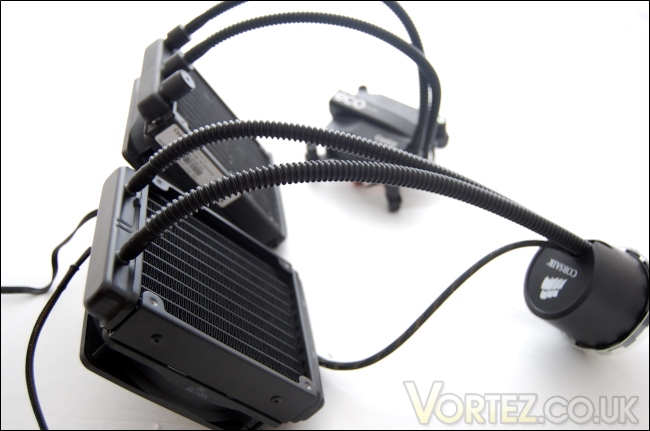 Corsair H50 vs. CoolIT ECO
In comparison to the CoolIT ECO, the Corsair H50 definitely has a sleeker design and more professional finish but looks are not everything and it's the performance difference that we are here to see.