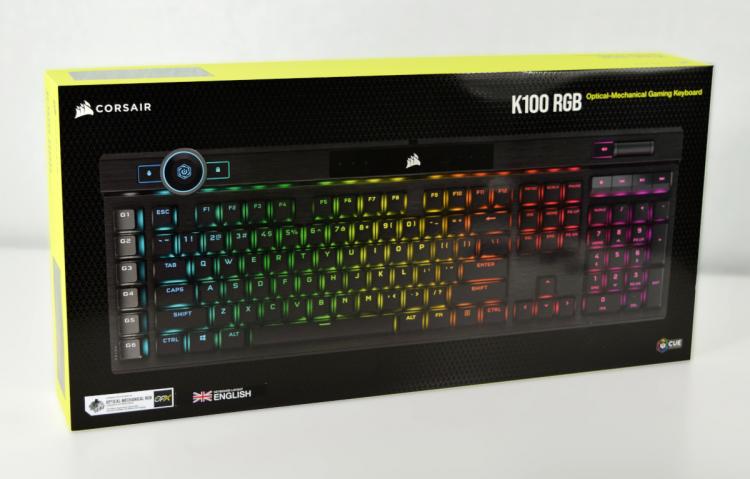 CORSAIRs packaging is as eye-catching as usual but also serves to inform consumers about the most important features. The keyboard image has a generic US layout yet both the switch type and regional layout is clearly marked on the front. Thatll be important at retailers where both the Optical-mechnical and ordinary mechanical variants are likely to be sold side-by-side, as well as rare locations where more than one regional layout is sold.

Also listed along the bottom edge are many of the features of the K100 in eight relevant languages. No mention is made of requiring a second free USB port for USB 2.0 passthrough, which might catch a few customers out. The rear goes into a little more detail on the keyboards features, but doesnt exactly drown anyone in info.

A gloss finish cardboard construction may make it a little rough to recycle but the packaging's compact design doesn't waste space on the unnecessary.

Alongside the keyboard are 10 replacement PBT double-shot keycaps with textured finish (WASD & QWERDF), a keycap remover, and a plush wrist-rest. No driver CD is included, so youll want an internet connection to pick up the latest iCUE software installer for advanced use and lighting configuration.

The wrist-rest is filled with memory foam, allowing it to retain shape long-term, and finished with soft leatherette. It attaches to the keyboard via two strong magnets.

An included keyboard cover that protects the product during shipping can also double as a dust protector if youre so inclined.

At first glance the K100 clearly has DNA that goes all the way back to the K70 and through the K95 Platinum. A wide squared-off frame and prominent ridge at the back have been hallmarks of their K-series keyboards, and even the volume wheel returns.

Differences crop up fairly quickly however. Most notable is the iCUE Control Wheel at the left-rear, but even the central indicator panel for Caps/Num/Scroll locks has been changed from pinhole LED and embossed logo. Compared to the K95 theres clearly been a step-change in frame design.