👤by Tim Harmer  Comments 📅01-10-20
Conclusion
In January my colleague was very impressed with CORSAIRs K95 Platinum XT, their then flagship. Today we have to admit that the K100 RGB is at least as equally as impressive.

CORSAIRs keyboards have always oozed quality, and over the years any rough edges have been smoothed out to deliver an exceptional overall product that has both a professional and fun aesthetic. The same goes for the software, which is now one of the most comprehensive and refined suites on the market. In fact, CORSAIRs biggest issue in recent years has been developing advancements over the previous generation that went further than window-dressing.

With that backdrop its surprising that CORSAIR found as many technical leaps to take as they have. Broader switch options are almost something of a given, but its the AXON controller and associated advancements that justify the brand new SKU. Add additional lighting zones and the iCUE Control Wheel and it genuinely feels like a substantial upgrade over the K95 Platinum XT, befitting its position as the new flagship.

OPX Optical-mechanical switches may be a headline feature but youll be taking advantage of them more for the durability than any difference in feel from the MX Speed Silver variant. That in itself is no bad thing given the popularity of the latter of course; either are preferable to now-common MX Reds due to lower actuation distances and shorter keystroke. Additional switch variants similar to the MX Silent and Brown would be appreciated but also a lot to expect from day one with a brand new product.

One surprise is that CORSAIR opted to not use the more vibrant Capellix LEDs present in their coolers and case fans this September. Despite their omission however we observed good transitions between RGB colours and brightness levels, making for very pleasant lighting effects if the full RGB experience floats your boat. A downside is a distinct blue shift to the LEDs which makes configuring a clean white light a little tricky, and could indicate some issues with factory calibration.

CORSAIR still reaps the rewards from their Elgato acquisition, allowing streamers to manage transitions and other aspects of their stream through built-in functionality that would typically be the province of a dedicated Stream Deck. While not as fancy a solution it will both do the job in a pinch, and also keeps your hands on your keyboard during in-game action. 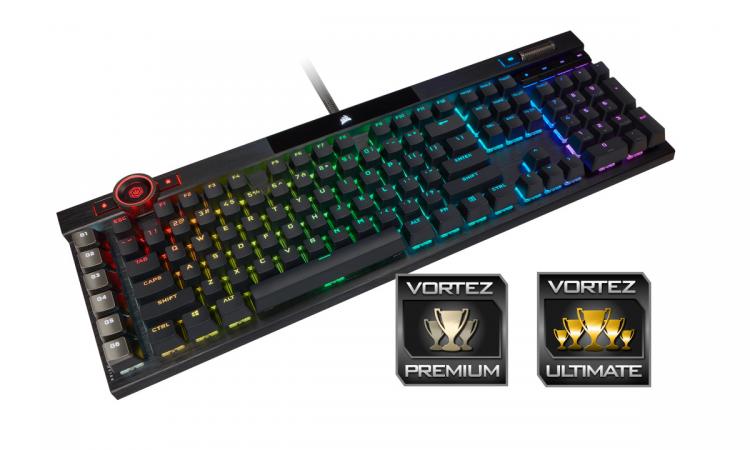 Its fair to say that the iCUE Control Wheel is still in the initial stages of development on a software level. As a tool its still in search of that killer app(s) to tie it to and really run riot, but the foundations are there for a compelling feature of the future. Theres an outside chance that Star Wars: Squadrons could have a place for it (e.g. shield/weapon/engine power balancing, throttle etc) if a keyboard & mouse control scheme offers a good general experience.

Finally, we come to the price. At £229.99 its £30 more than the K95 Platinum XL, but builds on every aspect of its predecessor to a more advanced solution overall. New features are meaningful additions and theres a lot to get to grips with for both relatively casual users and the prosumer/competitive gaming crowd. Its a considered purchase of course, but we cant imagine anyone being in the slightest bit disappointed when they have their hands on one.

The K100 RGB is a fantastic evolution of CORSAIRs keyboard range, and the introduction of highly durable OPX optical-mechanical switches bolsters its credentials as the new flagship design. Also boasting 4000Hz USB polling, greater iCUE integration than any keyboard before it and fantastic looks and build quality, this £230 monolith to excess stakes a claim as the Ultimate peripheral.