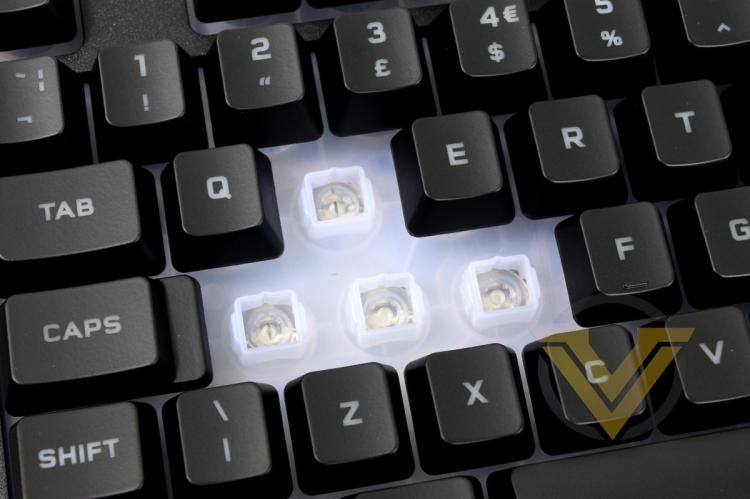 When discussing the performance of this keyboard in particular we believe that the key itself is the most important aspect, and the most divisive.

Rubber dome switches tend to have a very non-linear keystroke resistance, similar to a tactile mechanical switch but far more pronounced, and those on the K55 are no different. Theyre heavy at first, and then when the dome buckles transition to be quite light until fully depressed. And they do need to be fully depressed; in contrast to conventional mechanical switches a keypress only registers when the stroke bottoms out. The spring back is similar, but reversed - soft then sudden.

This dynamic can make them fatiguing to use, particularly when brand new and if youre used to lighter mechanical switches such as CHERRYs MX Red style. We became accustomed to them after about a day but they remained more fatiguing well into our time with the keyboard.

CORSAIR claim that they are quieter than standard mechanical switches and thats fair, particularly if youre used to bottoming out against a metal backplate. Theyre thus a little less noticeable over a skype call or discord meetup than an equivalent mechanical design, although MX Silent mech. switches or a common O-ring mod would also alleviate that particular problem.

If the main keys can be thought of as mushy then the media keys dail that up to 11. They certainly work perfectly well but the housing makes them more uneven and less crisp to use. You can rebind their functionality in software, but we wouldnt suggest using them for important gaming keybinds.

When handling the keyboard initially we did notice a small amount of flex to the frame it we twisted it, but that didnt really cross-over when typing. It remained stable even when typing with some force, exhibiting effectively no deformation unless pressing down hard on the CORSAIR logo with the feet extended.

Speaking of the feet, the rubber pads and feet tips kept the keyboard securely in place over extended sessions. The right side had slightly less friction than the left, but not so much that we observed any rotation.

In general wed also suggest using the included wrist-rest. Despite not being a plush gel-filled rest as on the K100 RGB, the K55s has a soft-feeling surface and elevates the palm just the right amount to reduce strain on the hand and fingers. The rest also didnt meaningfully affect the position or other dynamics of the keyboard. We may have long-term reservations regarding the long-term durability of the clip-on mechanism, we had no issues whatsoever in practical testing.

Prior to cracking on with some gameplay we tried out the hardware macro recording feature. Its a simple process: press the M macro record button until the indicator LED starts flashing, then press the keystrokes in sequence, then the macro record button again, then a G-key to assign to sequence to. Timings are preserved, and existing macros bound to that G-key are overwritten. Its an excellent system that doesnt need software to operate, but using software will allow you to edit timings precisely. 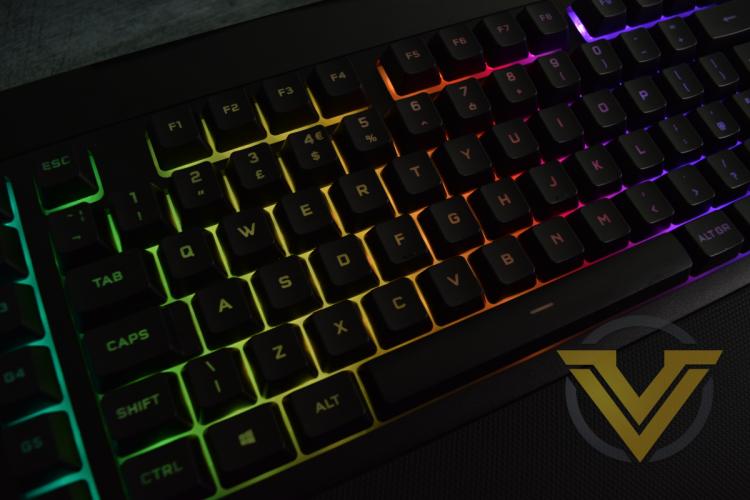 Once again we cranked out World of Warcraft and Hades as our go-to games for testing. The former will tend to highlight any Key Rollover and ghosting problems, missed keystrokes and software inadequacies. The latter is all about responsiveness and missed keystrokes.

The software allowed us to re-use game-specific profiles created for the K100 RGB, which turned out to save us a lot of time in the short term. Sharing with other CORSAIR community members or just reusing profiles from other CORSAIR peripherals you might have used is an great but understated boon of their approach to the iCUE ecosystem.

The same wasnt quite true of the macro keys. Our use patterns with such keys are for quick strikes rather than more deliberate presses which sometimes (and we must emphasise rarely) led to not fully bottoming out the key as required.

Mechanical keys in similar positions - particularly lightweight switches with short actuation distances of 1-1.5mm - are very reliable even if youre not consistent in following through with the keystroke. Thats important in MMOs and MOBAs because you want to return to the more commonly used action keys quickly rather than take extra fractions of a second to ensure a fully pressed key.

We certainly missed the crisp response of a mechanical key in World of Warcraft, but after the first day of bedding-in time we didnt notice any obvious missed keystrokes in the main set. Fatigue became more of a factor in extended sessions of a couple of hours or more than weve experienced in the past.

The same was true with our time in Action-RPG-Roguelite Hades. It requires the use of relatively few keys, but demands responsiveness and no missed strokes. As such you can be absolutely hammering those keys, particular any key you have set to Dash (default Space) yet still need precise and subtle movements.

In this role the K55 performed adequately. WASD keys didnt flub their lines, but required a little more force and would make reaction times just a little slower. Clearly CORSAIR have paid particular attention to the Spacebar stabaliser however as it responded evenly even when being quite sloppy with where and how hard it was struck. All in all, its probably as good as a rubber dome keyboard is likely to get and far quieter, but doesnt hold a candle to the mechanical experience.

CORSAIR advertise 12-key rollover and some anti-ghosting (though their not quite so descriptive on the latter). We utilised a simple app that detects keypresses and observed when and how detection started to break down.

It swiftly became clear that the zone around the WASD, including number keys 1-3 and both the R and F key, all acted independently as desired. Each was detected in turn, even with the majority held down, and this appeared to be true with the modifier keys (CTRL, SHIFT and ALT).

Rollover started to break down as we moved right-wards. Taken in rows, from R, T and Y onwards only two of the three pressed with register, the third would not if the earlier two were held down first. This didnt extend to rows above and below, which still registered if it was the third key pressed.

At no point did we detect any ghosted keys, i.e. keys that erroneously appear when multiple others are pressed.

In summary the K55 RGB PRO XT has good rollover characteristics for a membrane gaming keyboard, some of which advertise as little as 6kro. Its not full-keyboard nkro, but will be good enough except in some very exotic game keybind setups or fast-typing scenarios.