👤by Tim Harmer  Comments 📅30-03-21
Conclusion
We spent about a week with the K55 RGB PRO XT as a primary keyboard for work and gaming, and after every session came back to one central question: Do you like rubber dome switches?. Any assessment of the design is dominated by that point, to the extent that other benefits (or indeed weaknesses) are drowned out by that subjective preference. So let's be realistic - if you actively dislike membrane switches then the new K55 models are not for you. But if you have a more neutral or positive outlook then theres quite a lot here to recommend.

Straight off the bat the most impressive part of the K55 RGB PRO XT is the lighting. At first we werent sold by the diffuse rather than discrete illumination, but the seamless way one colour can flow into another quickly grew on us. Comparing it directly with the K100 is a bit like comparing two painting styles - neither is inherently better or worse, just different. Its not a stretch for us to imagine someone greatly preferring the K55, and the fact that CORSAIR support a complex lighting effect engine through iCUE is a real feather in their cap. Bear in mind of course that per-key lighting is only available on the XT model though.

The second aspect we value highly is the dedicated macro keys. We dont often see them on either membrane or mechanical keyboards, and for a subset of games theyre exceptionally useful (particularly if you dont have a complex MMO/MOBA-style mouse). Macro keys that can output complex sequential keystrokes and strings can also be helpful in some productivity applications, such as adding HTML markup to text. Functionality to record macros on the fly and then edit them later is a nice bonus made sweeter by it being so straightforward on the K55 RGB PRO XT. 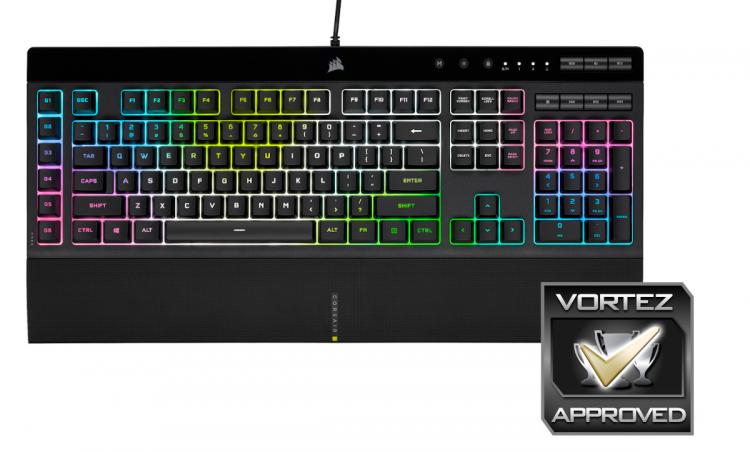 Our review of the K57 Wireless in 2019 criticised build quality in particular due to a flex in the chassis when typing. That doesnt seem to be the case in the updated K55 model despite an outwardly similar frame, and indeed it feels very stable even when hammering the keys. It is possible to twist this keyboard when gripping both edges, but the deformation is small for the force required.

Backing up the build quality is IP42 Dust and Spill resistance. This isnt as exotic as it sounds, just the definition of nice to have, but should improve longevity and reduce the risk posed by minor liquid spills.

Key rollover is another aspect worth touching on. We found it to be flawless around the critical WASD-zone (extending up to 1,2,3,4 and including Q,E,R,T,F,G) both with and without crucial modifiers (SHIFT etc). Thats not quite industry-leading, but its good enough for the majority of gamers. We also didnt detect ghosting issues, so thats a big plus over some membrane and memchanical models on the market.

As for the membrane keys themselves theyre the same unspectacular feel that you will see on models from manufacturers the world over. Theres some wobble on the keycaps, but not a devastating amount, the sort that you barely keep track over after your first day using the keyboard. The spacebar is good - stable and consistent across the key, even more so than some poorly stabalised mechanical keyboards weve experienced in the past.

Rubber dome switch keys are not for everyone. In fact, we generally recommend mechanical keyboards to anyone who can afford to invest in one. But if youre running with a strict budget for your peripherals, and a laundry list of features necessary for the games of your choice, then switch type might be a compromise youre willing to make.

Beginner streamers are one demographic in particular who might be the most attracted to the keyboard. RGB lighting, Elgato Stream Deck software integration for for the G-keys and relatively quiet switches are a solid combination of features for this use case below £100.

Some will be disappointed that CORSAIR havent progressed to offering their own memchanical alternative switch. The variable quality of such alternatives indicates that such an investment could be a design dead-end, particularly if budget mechanical options become more widely utilised.

And to round things off, CORSAIRs iCUE software does plenty to justify its inclusion as a major selling point. With little in terms of on-board memory and no hardware profiles, iCUE does the heavy lifting for both lighting configuration and context-dependent profiles that vary key assignments.

CORSAIR have thrown the proverbial kitchen sink at the K55 to make the new update a membrane keyboard for this decade rather than the last. Your enjoyment of it will be dictated by your appreciation for rubber-dome switches, but in other aspects - particularly per-key lighting - the K55 RGB PRO XT ticks all the right boxes. At $64.99 in the US its a mouth-watering budget option, while £74.99 in the UK puts it at the cusp of the budget mechanical segment.

- Membrane keyboard/rubber-dome switches
- Media keys not illuminated
- No onboard-profiles
- Premium price for a membrane keyboard, particularly in the UK/EU

There are currently 600 user(s) online:
Google