👤by Matthew Hodgson  Comments 📅07-03-19
Performance Testing
With the K83 Wireless being touted as suitable for multiple devices, well focus on them separately, helping you to find the information you want and also giving a clear definition between experiences, if there are any differences.

Windows
Connecting up the keyboard to our Windows 10 based PC was as easy as can be, we plugged the USB adaptor into the front of our case and let Corsairs iCUE do the rest. The keyboard, once turned on, found the connection straight away and with a small da-ding from the operating system, everything was good to go.

Firstly, the trackpad, which was a little overly-grippy for our liking, seeming to require a little more effort to move the cursor around than a trackpad that youd usually find on a laptop. The default speed was also far too slow for everyday desktop use so we went ahead and bumped that up to 75%. From there, things were much better, finding the trackpad to be incredibly accurate and with it supporting Windows 10 Gesture Control, allowing things like two fingers on the trackpad for scrolling, or three fingers, swiping right or left to switch between open programs, it was surprisingly useful as a productivity tool. Obviously, theres a small learning curve but the few we used, we learned very quickly. 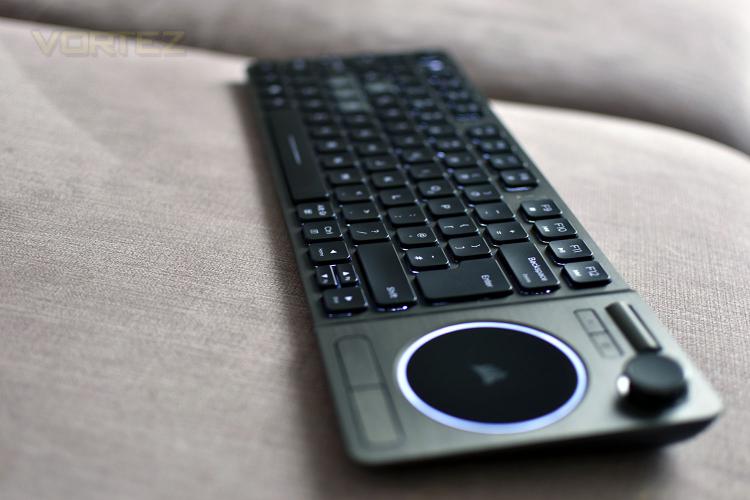 Moving onto the keyboard itself, the keys feel incredibly similar to that of an Apple Magic Keyboard, which in itself is no insult, they lack any real tactile feedback, but with the relative lightweight design of the keyboard, we applaud Corsair on the overall feel and spacing, its genuinely fantastic to type on as an entertainment keyboard. Having said that, if you were planning to buy this for typing up large projects or to use as a daily driver, wed recommend you looked elsewhere with your £99/$99.

Switching to gaming, we decided to give it a go without using a separate mouse, relying entirely on the K83. Things didnt quite go to plan, if were honest. Battlefield V, Borderlands 2 and War Thunder are three games we like to test with, so we stuck with that. We firstly toyed with the idea of using the trackpad but we would require three hands for this to work with the FPS games, but something like Cities: Skylines or The Sims would work perfectly. Instead, we switched to using the analog stick and the buttons on the top and back, this works reasonably well, considering what it is, but its absolutely not to be confused as a replacement for an actual mouse and mousemat. This is very akin to trying to use a console controller against players using KB+M, the disadvantage is just too great. We also found the button on the bottom of the keyboard was awkward to press and wasnt positioned where we would like it. Overall, in terms of gaming, the keyboard would be great for lounging on the sofa to play something slow paced like Civilisation or Two Point Hospital, but fast paced games are almost undoubtedly out of the equation.

The backlighting, while being restricted to white only, can be toggled through four different settings, but you're limited to only three at first. You can have off, dim or medium. Then, through the iCUE software, you can unlock the brightest setting. Corsair have most likely locked this away because of the impact on battery life, and with it being plenty bright enough on the 2nd setting anyway.

Mobile phone (Samsung Galaxy S9)
Pairing with a phone was a simple process, you press and hold Fn + F6 (or F7, as the keyboard can store two separate Bluetooth profiles) and then search for the keyboard via your phones Bluetooth menu. Pairing is then a simple case of entering the six digit code on the screen and hitting enter.

Once set up, we were provided with a mouse cursor and a keyboard to use with our Android phone. If you can then connect your phone up to a monitor or TV, you can be provided with a useable workstation with decent processing power.

While its a little gimmicky and cool to set up the first time, we couldnt really see a proper use for it, however, you may very well find one.

Smart TV (Samsung QE65Q7F)
The keyboard can also be easily paired with compatible Smart TVs, our Samsung Q7F found and paired with the K83 in a matter of moments and allowed us to use YouTube with ease, along with switching through compatible apps. The cursor didnt work, however, which wouldve been great, but we believe thats probably a limitation of the TV software instead of the keyboard.