👤by Matthew Hodgson  Comments 📅28-09-21
Performance Testing
The crux of a gaming mouse is, you guessed it, gaming performance but it also needs to perform well on a day-to-day basis, especially as more of us than ever before are now working from home, using our PCs for a multitude of different tasks. Im happy to say that I would comfortably use this mouse on a daily basis, the programmable buttons on top can be given functions such as speakers and microphone mute or volume controls, among many other options, all making your day that tiny bit easier, and the comfortable lightweight design of the mouse is in-no-way fatiguing or difficult to use.

The tried and tested design of the M65 has been no accident, with small improvements and tweaks made to the shape, weight and balance of the mouse over the last decade culminating into something that works incredibly well. This time around, CORSAIR have added tactical grip onto the thumb section, just behind the Sniper Button, to ensure you always have a firm grip on your mouse. The aluminium chassis remains largely untouched, offering rock-solid build quality without unnecessary weight ultimately allowing the customer to dictate how heavy the device is, within reason of course. Large PTFE pads on the underside reduce friction so that your intended movement matches the screen perfectly and a very well-engineered cable, with barely any bend resistance at all, ensures you suffer from as few snags or jolts as possible.

Gaming performance ought to be good, youd have thought anyway, with ridiculous numbers like an 8,000Hz polling rate and 26,000 DPI. The first thing that was immediately noticed are the QUICKSTRIKE buttons, a pre-tensioning system that CORSAIR have developed to remove the minuscule gap between the left and right mouse buttons and their respective switches underneath, they feel more positive and generally all round better, something that well definitely be looking for in other mice from now on (if youre struggling to imagine what we&#146;re explaining here, put your hand on your mouse and focus on pushing the LMB and RMB, youll feel a slight bit of flex before the actuation happens, on this CORSAIR M65, you get none of that whatsoever, absolutely none). Truth be told though, the 26K sensor and 8000Hz polling rates are much harder to notice, were firmly within the world of diminishing returns at this point, these features are more of a contest between the different manufacturers than they are to provide real-world improvements, noticing a 1ms delay is hard enough, to then notice a 0.125ms delay is just preposterous; it also leaves you with one less excuse for not executing your opponent.

The primary buttons on the M65 ULTRA do away with the old method, using electrical contacts and clever processing of unwanted signal, opting to equip the device with optical switches instead. These new switches use a beam of light within the switch that, when broken, registers the button press. There are many advantages to this new method, and youll also find it within the mechanical keys of some expensive keyboards, the main advantage being a much cleaner signal that can be actuated multiple times without delay, and theoretically a better lifespan as well.

The ability to adjust the weight of the mouse is a nice addition, though it genuinely doesn't seem to change the feel of the mouse much at all. The quoted figures are 97g base, going up to 115g. The weights are also a bit too complicated and difficult to quickly swap and change, where some mice they can be swapped in a matter of seconds, you need to find yourself a penny or kitchen knife to undo the screws, which can take a good few minutes. 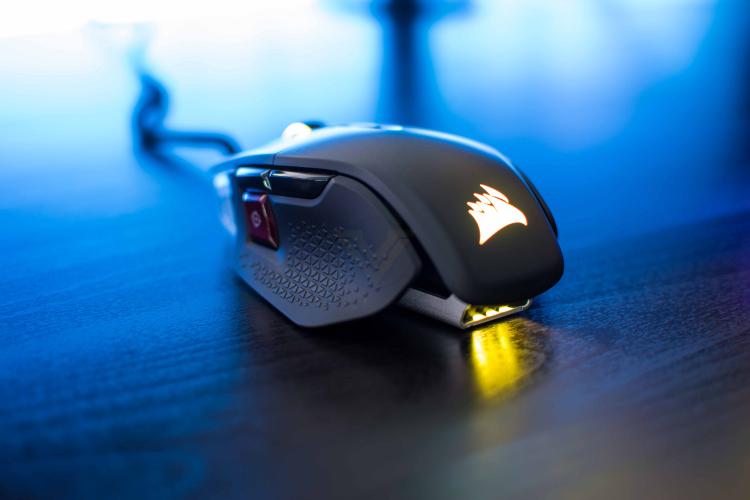 Coming into the review, gesture control was something that excited me quite a bit, using a blend of sensors inside the mouse to accurately gauge the mouses current angle. You can assign individual commands to the four main angles, forwards, backwards and side to side. CORSAIR are marketing this as being useful for gaming, with their exact example being a weapon reload, but in practice this isnt quite so easy. Lifting your mouse from the desk and tilting it in any direction is a simple enough task, but finding the time to do that while youre being shot at is not easy, nor do you want to take your mouse off the surface at all. For simpler office tasks, such as forwards and backwards in web pages, play/pause on your media application or a quick way to mute your speakers or microphone, it works rather well; theres obviously a bit of a learning curve with it but once you have the knack, its all gravy.

We fired up some games, Call of Duty Modern Warfare, War Thunder and RuneScape, for a decent mixture of genres, to ensure we give the mouse a rounded test out. Within Call of Duty, the M65 performed remarkably well, the sensor is as accurate as they come with no weird behaviour noted at all, the weight and shape of the mouse suited my hybrid palm/claw grip style nicely but it should suit all three major grip types well. The sniper button, which temporarily reduces the sensitivity of the mouse, is positioned absolutely perfectly for my grip, right under the tip of my thumb while I tend to use the last knuckle of my thumb to grip the mouse; the same cant be said for my partner, however, with it not quite falling so ideally. A one-size-fits-all mouse is the holy grail within this sector but for obvious reasons, will never happen.

War Thunder, especially when flying the planes, requires smooth movements of the mouse with tiny adjustments along the way. The M65 excelled perfectly here, the PTFE pads on the base aided movement nicely with zero friction and the cable, thanks to its super bendy nature, didnt hinder efforts at all.

RuneScape, being an MMORPG, would benefit from an MMO orientated mouse, but theres no reason why several of the buttons on the mouse cant be re-purposed for use with an MMO. Its comfortable and lightweight so easily capable of being used for lengthy periods of time, which is how MMOs are typically played.

Somewhere that CORSAIR has traditionally done well is with their RGB lighting; they typically provide bright, vibrant LEDs and thanks to their software, its super customisable. The M65 ULTRA is no exception, the lighting is punchy with great uniform colours, effects are silky smooth and the fancy three stripe exit at the rear of the mouse gives it a unique style.

All in, its easy to see that CORSAIR have had a decade to perfect this design, the overall design and usability of the device is all good from our point of view.

The wireless version gains a few pounds, weighing in at 110g compared to the 97g; while this might sound insignificant, its certainly noticeable, and is definitely heavier than most mice within its price range; a large lithium-polymer battery is mostly responsible for the weight gain, with a claimed battery life of up to 120 hours being quite a bit higher than most of the competition, but it doesnt negate the weight. You can always charge your mouse more often but you cant remove weight from it.

Battery life is very decent, we got a good 20-25 hours of use out the device before hitting half way, with the RGB lighting turned up to full brightness. Even if you use your PC a lot, youll get a week out of this mouse without much bother. Another thing to note is the M65 WIRELESS will let you charge it from a dumb source, like a phone charger; very handy if you already have a Type-C charger on your desk, which Im sure many already do.