DDR4 has been slow on the up-take thanks in part to the high price of Intel's i7 CPUs, the X99 chipset and of course DDR4 itself. Nevertheless, DDR4 remains at the for front of PC memory technology and thus is the stalwart flagship of memory manufacturers. With DDR3 we saw huge heatspreaders but the popularity of such memory kits waned when it became problematic to fit the large CPU air coolers required to keep Intel's CPUs cool. DDR4 then has seen a shift away from oversized heatsinks to low profile variants. Crucial, ever at the cutting edge of digital trends have also adopted the lower profile heatsinks to continue being one of the most popular brands of PC memory. 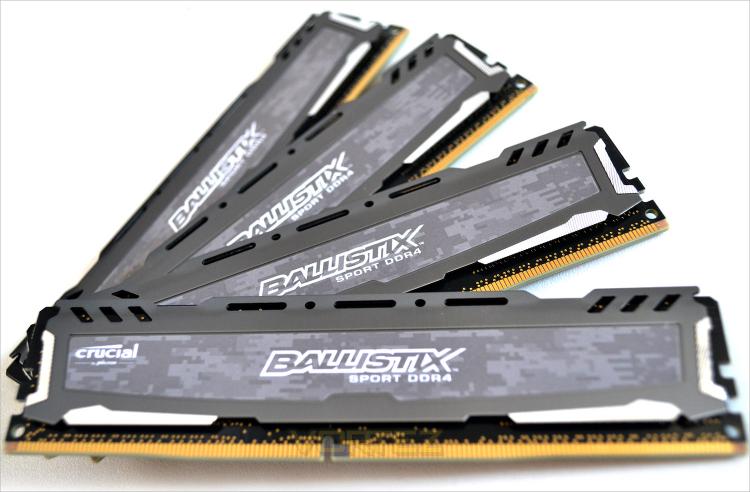 The last Ballistix Sport we reviewed impressed us and attained our Silver award so this latest revision has a lot to live up to. The new revision doesn't appear to add very much on paper. In fact we struggled to see any difference. Even the heatspreaders themselves appeared near identical. Looking closer however and we see the heatspreader design has been tweaked slightly with vents uppermost and a digital camouflage sticker across the midriff. Is this enough to improve on the Ballistix Sports last outing though? Read on to find out...

About the Ballistix range
Designed for performance enthusiasts and anyone who simply wants to get more out of their system, Crucial Ballistix Sport performance memory helps you do just that. Give your processor the resources it needs to perform and make your computer faster and more responsive. Memory is fun when its faster, when its stylish, and when it helps your system perform at a higher level. Compared to standard PC memory, thats exactly what Ballistix Sport is engineered to do. Get faster speeds and run demanding applications with ease. Multitask at will with increased bandwidth. And strike first with better latencies and reduced load times.

There are currently 864 user(s) online:
Google