Its fair to say that times have never been tougher if you want to spec out and assemble a new gaming system. Silicon shortages, scalpers and a renewed engagement with cryptocurrency mining have made sourcing performance-class processors - GPU and CPU - more difficult than ever unless youre willing to pay enormous premiums. Second hand hardware is spiking in price, and hardware two or more years old is being re-released to form a stop-gap until stock normalises sometime in 2022.

Just prior to Christmas 2020 we reviewed the Ultra 7 RTX Elite, a system from Cyberpower PC in the UK powered by AMDs Ryzen 5800 and the GeForce RTX 3060 Ti. At the time we opined that a system assembled by one of the wide selection of UK System Integrators might just be the most reliable way right now to really get the system specification you desire. A few non-essential parts might need to be compromised on, you might not be able to get the exact brand of graphics card youd prefer (perhaps MSI rather than ASUS etc.), but in terms of getting a collection of hardware in a given performance band SI builds were the way to go.

The same appears to be true three months later. Parts for SIs are coming in more regularly, demand (and especially waiting lists) for entire systems isnt quite as high as individual components, and at first glance pricing isnt quite so inflated. Thats not to say youll always be able to place and order and get it next day, but you at least shouldnt be held in pre-order limbo for months on end. 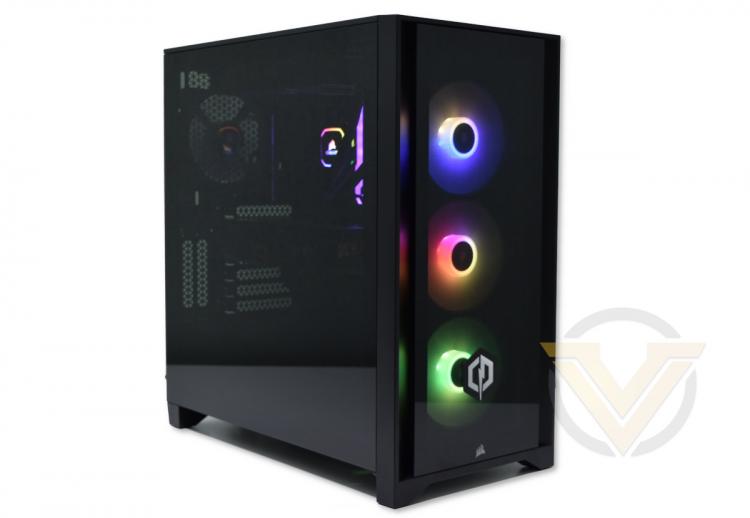 Take for example the system were reviewing today. As configured, Cyberpower PCs ICUE Infinity is on paper a typical mid-tier gaming PC was a baseline specification oriented towards 1080p gameplay at greater than 60fps. Component customisation will allow plenty of flexibility but even these relatively modest aspirations can be un-done without its key component: NVIDIAs GeForce RTX 3060. Released just last month, it brings new performance levels to the xx60-class of graphics cards on a par with last generations upper-mid-tier, and has flown off the shelves since launch. Youll be hard-pressed to purchase the card alone today.

ICUE Infinity is ably buttressed by Intels i7-10700KF, a CPU with 8-core and 16-threads of thoroughbred horsepower, a cost-effective MSI Z490-A PRO motherboard, and CORSAIR Vengeance DDR4 3200MHz memory. And to sweeten the bundle in a way that makes it look like a million bucks Cyberpower PC utilised additional CORSAIR iCUE-powered components - including the new 4000X chassis - to give it the sort of bling you should expect from a quality SI.

So the question becomes, does the ICUE Infinity deliver on expectations of performance and affordability, or would it make you feel like the wait for standalone components is worth it? Lets take a closer look.

Originally founded in the United States, Cyberpower Inc is one of the leading brands in the competitive US computer market. With vast global backing from leading technology brands such as Intel, AMD, Nvidia, Asus and Microsoft etc, we aim to deliver the most up to date hardware for your needs at wholesale prices, and bring the well renowned name of Cyberpower Inc to the UK. With vision, commitment and determination we can manufacture a vast range of custom built PC systems to suit the needs of any individual or company. Our PC systems are built with utmost care and attention as we strive towards making this not just our profession, but our obsession.