👤by Matthew Hodgson  Comments 📅04-06-19
Performance Testing
To test the Stream Deck XL we decided to focus on its productivity merits, rather than its ability to increase Streaming production value. Thats been covered everywhere and we dont feel wed get anywhere close to the potential of this device with a few days crash course in streaming, plus, you dont want to see me playing Fortnite.

Adding links to commonly used websites, applications and shortcuts is handy, particularly if you set up multiple folders and have several projects on the go, though using the Stream Deck as a unit that remembers keyboard shortcuts and Macros for you is even better. For instance, someone may find they use Photoshop and Sony Vegas on a daily basis, where keyboard shortcuts are part and parcel of the task, though remembering those keyboard shortcuts is a lengthy and frustrating process where youll often find yourself in a cascade of menus looking for the button on-screen anyway, having forgotten the particular shortcut. An example of this is resizing photos for these reviews, the DSLR camera takes photos at exactly 6000 x 4000 but, to make things easier on your internet connection, we scale these down to 1500 x 1000. The process for this in Photoshop is:

That goes through a process of opening the resize menu, setting the horizontal pixel size, with the vertical pixels automatically filling in at the current ratio of 6:4, then zooming in from 25% to 100% to bring the image back up to a useable size. This is something that can be done very quickly but binding it to a button on the Stream Deck XL helps to save a few seconds per photo, on every photo, and gets rid of any mistakes. And remember, this is just a single example of one Macro that can be bound to any of the 32 LCD displays. 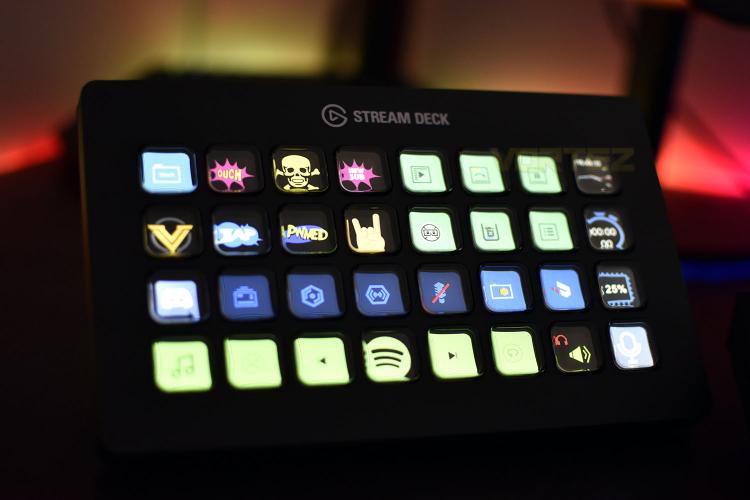 Moving onto the build quality. The device weighs around 500g with the stand, which paired with the non-slip rubber base makes it very difficult to move for the most part, but with the top-right and top-left buttons, if youre even a little bit too enthusiastic with your press, you can find the device will rotate on the spot.

The buttons, in use, feel solid and we love the concave shape and grippy texture of each key, but we noticed that the top-right corner of each screen does dis-colour substantially under each press, even when using a small amount of force. We trust that Elgato have done their homework and thoroughly tested the robustness of the LCD screens but an underlying concern still remains as to their ability to withstand this on a day-to-day basis for years to come. Also, due to the shape of the plastic surrounds on each button, you do get a slight amount of warping and distortion around the edges of the buttons but nothing that ruins the appearance too much.

Another concern we have is the devices set angle of the stand. While it does offer a much better viewing angle than lying it flat on the desk, wed still prefer to have some adjustability like was seen on the original Stream Deck.

One final point that we feel is worth a mention is Elgatos decision to move to a removeable cable. Keeping a workspace tidy and clutter free is important to a lot of people so allowing their users to choose a cable of their own length almost certainly helps with that. We also praise them for using USB Type-C instead of Micro-USB; its much more robust and is more in-tune with the times.