Enermax are no strangers to enthusiasts, having built up an excellent reputation thanks to their catalogue of products spanning power supplies, peripherals and cases. We know them best for their class-leading power supplies such as the highly acclaimed Revolution85+, Platimax and MaxRevo series but like most of successful companies, Enermax have delved into designing cases as well as a range of peripherals, most notably their brushed aluminium Aurora keyboards. However, if we have learned anything in the past, its that diversification is the key to success, so following the likes of Cooler Master and Thermaltake amongst many others, Enermax have looked to expand their product range. The most natural progression was CPU coolers given Enermaxs vast array of fans and so today we have with us their first tower cooler, the Enermax ETS-T40-TA.

The Enermax ETS-T40-TA is one of three variants the manufacturer is releasing. Although identical in design, the three variants bundle slightly different fans:

The sample we received, the TA, features a 120mm T.B.Apollish fan and unlike the other two heatsinks boasts a nickel-plated finish on the four copper heat pipes. Like all coolers, the ETS-T40-TA uses aluminium and copper constructions for the fins and heat pipes/base respectively. The T.B.Apollish fan differs slightly in specification to that on their web page, boasting an 1800RPM rotation speed instead of a mere 900RPM speed to better serve its purpose on the heatsink. As such, the T.B.Apollish fan still sports numerous technologies and innovations that define it from its competitors.

Despite appearing as a standard tower heatsink on first impressions, the ETS-T40 is home to numerous technologies to differentiate it from other coolers. These include Heat Pipe Direct Touch, Stack Effect Flow (SEF), Vortex Generated Flow (VGF), and Vacuum Effect Flow (VEF), to improve airflow and thermal transfer efficiency. The ETS-T40s main competitor based on design alone is Cooler Masters notorious 212+ but priced a good £15 higher; the Enermax will have to demonstrate superior cooling capabilities which its patented features aim to satisfy.

A bit about Enermax:

Enermax Technology Corporation was founded in Taiwan in 1990 and today is one of the leading manufacturers of PC components (power supplies, PC cases, cooling fans, keyboards, HDD enclosures and other peripherals). Since 2000 the head quarter is located in Taoyuan, Taiwan.

Six subsidiaries and numerous affiliates around the world provide an excellent network for ODM/OEM and retail business. Enermax has subsidiaries in Germany, France, Italy, USA, Japan and China. Worldwide, over 600 employees work for Enermax. Since 2004, the Enermax Technology Corporation is listed at the Taiwanese stock exchange.

More can be found here. 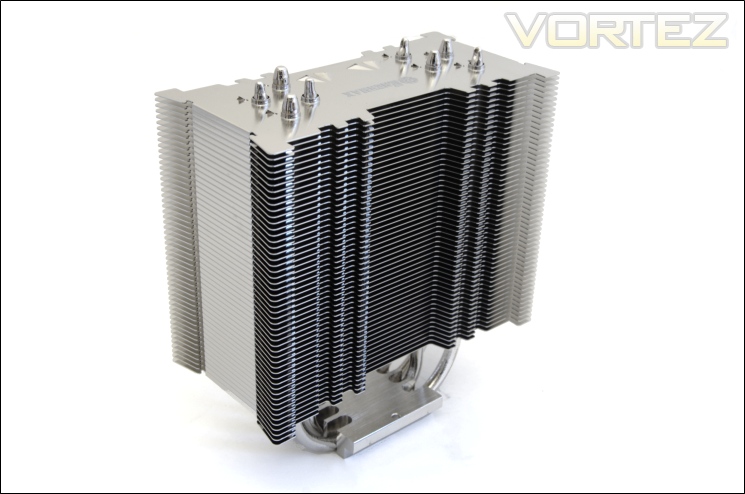 Let see if Enermax have what it takes to challenge its competitors in the CPU cooling market.