First up, a closer look that that brushed aluminium bezel. The finish is excellent, though keep in mind that aluminium tends to pick up fingerprints very easily so you'll want to be careful to wipe them away quickly following installation. Six rubberised sliders independently control the fan voltages (and hence RPM) and are raised from the bezel just enough to facilitate adjustment over without getting fingerprints over the bezel. 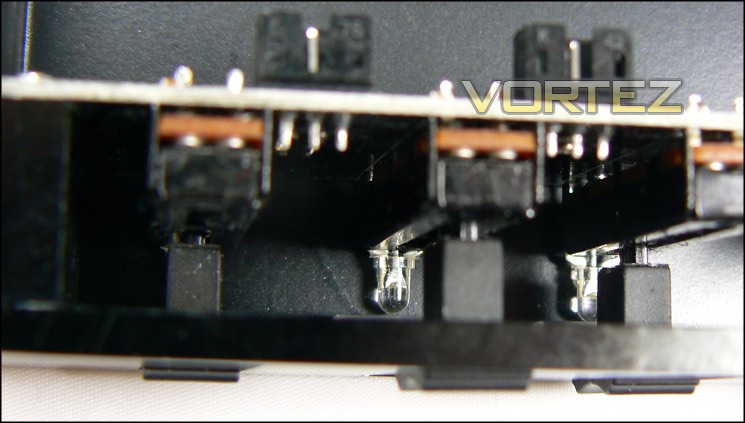 Under each slider is an indicator LED which glows white at low fan RPM, blue at high RPM and off when not in use or in operation with no tachometer response (i.e. there is no 3rd/yellow fan wire connected, see below).

Here we can observe the six fan cables and SATA/Molex power cable. Providing both options for power supply is a neat way of future-proofing the Adjust 108 for a time when Molex connections are removed from PSUs, and also have the potential of improving cable management as these days SATA power to a DVD is much more commonly used than any form of Molex. 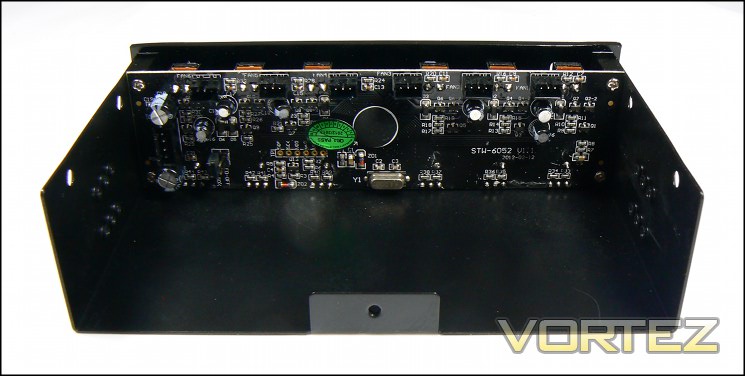 We should note that there is very little additional cooling for the Adjust 108 in the form of heatsinks. This makes running high power draw components such as water pumps at low speeds over extended periods a relatively risky proposition.

The Adjust 108 offers three brightness levels for the LEDs, but if you were expecting a discrete switch on the front you will be disappointed. Brightness is controlled via a jumper on the PCB, a pretty old-fashioned solution to this knotty problem. On the other hand this does mean that the aluminium bezel isn't marred by an additional switch or slider.

One interesting feature of the Adjust 108 is that the fan controller briefly runs at 100% through each channel when the system is powered up from off or sleep, before falling to the slider-selected level. This should allow fans to start which would otherwise fail to at low operating voltages.

Each channel was able to drive the fans without issue. When testing the two-pin 80mm fan, we discovered that the channel's LED will not activate in the absence of a tachometer reading (typically the 3rd wire, yellow); however the slider will continue to adjust voltage (and hence fan RPM) as anticipated.

The Adjust 108 doesn't detail the maximum and minimum extent of voltage control it's capable of. Through the use of a trusty multimeter we measured voltages across each channel during minimum and maximum settings. Given a stable 12V supply, the Adjust 108 varies between 5V and 12V in each channel, +/- 5%. Overall the Adjust 108 performed admirably, and though it doesn't provide detailed fan speed feedback it does meet the needs of the vast majority of users.