Gigabyte have always been a prominent player in the motherboard segment along with ASUS and MSI as tier one manufacturers. Their popularity soared back in the socket LGA775 days when Intel released their P35/X38 chipsets. Their vast range of high performance and highly overclockable boards grounded them as a firm solution for enthusiasts round the world. Two generations of chipsets later on and Gigabyte have still retained this competitive attitude to deliver an array of mouth watering feature-packed motherboards. One of the philosophies they seem to champion themselves on is their ability to target a range of audiences with their sheer selection of boards to choose from, from budget entry level products to the ultra high end solutions across all the chipsets. Today, we have their newly revised GA-X58-UD3R motherboard which is aimed at the budget conscious enthusiast at a cost of under £150.

Many of Gigabyte's initially released X58 motherboards have gone through several transitions over the last two years to accommodate new features and to provide better performance. The most notable change came in the form of USB3.0 and SATA 6.0Gbps support. When first released, the UD3R moniker represented the company's budget alternative to those wanting to jump onto the X58 bandwagon. The problem was the 4 memory slot design often discouraged people from buying it for future expansion purposes. In response, Gigabyte have streamlined their budget segment and with the addition of the latest features, created the GA-X58A-UD3R where the second 'A' denotes USB3.0 and SATA 6.0Gbps compliance. On a similar note, the 'UD' abbreviation represents their Ultra Durable design throughout their product line up. Furthermore, they have revised the board with a much better VRM circuitry with 12 phase PWM design on the CPU for superior overclocking. Other than that, we can expect to see many of Gigabyte's innovative features such as the 2 oz copper PCB, extra USB power, 3-way graphics card support and a rich application suite to manage the motherboard from a user friendly windows environment. In essence, it has the making of a high end motherboard with a few cost cutting compromises to appeal to a budget minded audience.

A bit about Gigabyte:

GIGABYTE was founded in 1986 in a small lab by four young engineers passionate to make their mark on the industry. GIGABYTE remains dedicated to the core belief of improving the lives of our users by manufacturing products that are high-performing, reliable, and of excellent quality. Here are some of GIGABYTEs innovation highlights:
-USB 3.0
-Ultra Durable Technology
-GPU Gauntlet sorting
-Docking Netbook
We have to mention that the market this board fall under has become very fierce over the past year and the recently reviewed and highly acclaimed ASUS P6X5

-E will prove to be the Gigabyte's toughest competition. 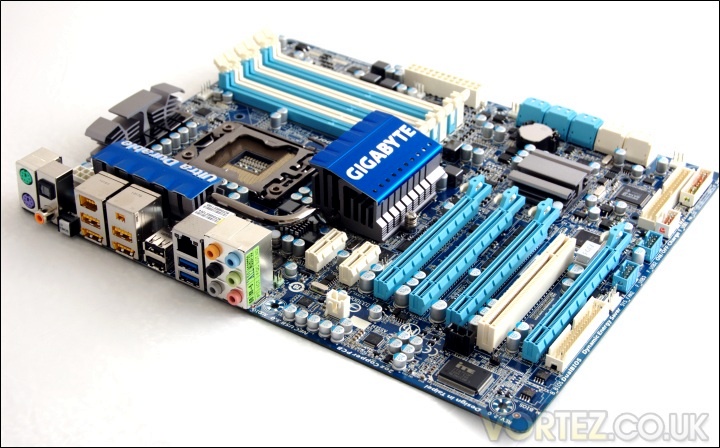