👤by Richard Weatherstone  Comments 📅17-05-11
Specifications
The GF104 chip was originally designed from the ground up to target the mainstream market and it came in the form of the GTX460 in two SKUs sporting different framebuffers. However, it was still based on the same Fermi architecture as its bigger brother, the GF100 and following in its footstep it came with one functional unit disabled. The GTX560 gets the same treatment the GTX580 cards have received and features an updated/tweaked version of the GF104 chip. This has come in the aptly named GF114 GPU. As with the GF104 GPU, the GPU features a total of 384 CUDA cores but on the former, it was always limited to 336 Cores as found on the GTX460. Improvements in power leakage and reduction in power consumption meant that in the GF114 guise, all the cores were functional and as such the GTX560ti had 8 functional Stream Multiprocessors (SM). To target the mainstream, Nvidia have decided to provide a cut down version of the GF114 GPU with only 7 of the SMs enabled for a total of 336 CUDA cores. This places the GTX560 non ti perfectly between the old GTX460 and the more recently released GTX560ti. The card boasts the benefits of the updated GF114 GPU with performance to outmatch the GTX460 thanks to its clock speed.

The GF114 GPU still boasts the same transistor count of 1.95 billion and uses the same 40nm manufacturing process. The latter highlights the fact that Nvidia have engineered the chip to be more efficient on a more mature process without resorting to a small manufacturing process. Architecturally, the layout of the core has remained unchanged. Each of the 8 SMs has a polymorph engine and every 4 SM shares a raster engine. Unlike the GF110 core, each SM has 48 CUDA cores instead of 32 and each has 8 texture units rather than 4. The implication of this is that each SM of the new core has more compute and texture power than the original GF100/110 GPU. The result is a core organised in an 8x48 block to give a total of 384 CUDA cores. Additionally, there's the L1 Cache for each SM and a common L2 Cache shared the by the core's 8 SMs. One disabled block on the GTX560 means that the total number of cores has reduced to 336 and the number of texture units is down to 56, matching the GTX460.

The memory subsystem is also intact. The core has 4 memory controllers for a 256-bit memory interface. The GTX560 makes full use of them for 1024MB of on-board memory. To compensate for the narrower memory bus, Nvidia have teamed the core with GDDR5 memory for much higher bandwidth that could previously be achieved using the same bus width.

Other benefits that have made their way onto the GTX560 are less leaky transistors and as a result, much higher default clock speeds. Whereas the GTX460 came clocked at 675/3600MHz, the GTX560 is clocked at 810/4000MHz. The result is a card that is substantially more powerful than its predecessor with a 10W drop in TDP.

The card we have today is an overclocked edition from Gigabyte, the GV-N56GOC-1GI. As such, it has a factory overclock preset on the card to boost its GPU core to 830 MHz. Shaders too are overclocked to run at 1660MHz while the memory remains at a stock speed of 4008MHz. While these are by no means huge overclocks, they are nonetheless a welcome addition to the cards armoury. The GTX560 stock settings are 810MHz on the core along with 1620 for the shaders and 4008MHz for the memory. 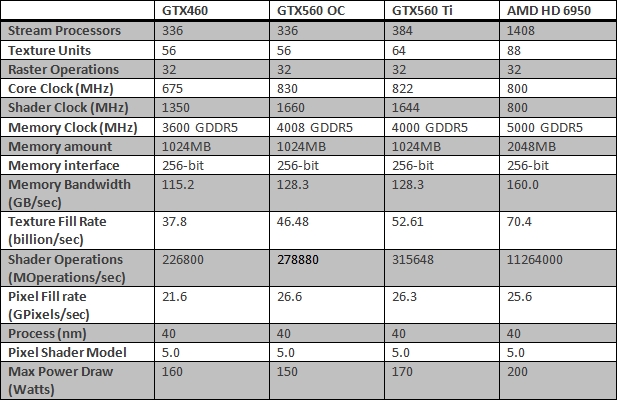 So as you can see, the CUDA processors are the same as the GTX460, some 48 less than the GTX560 Ti but the overclocked card we have has a faster clocked GF114 core, faster shaders and faster memory, albeit slight. The good news doesn't stop there though as the power draw of the GTX560 is 20w less than the Ti version which should equal a cooler, quieter card, especially as this version has Gigabytes 'Windforce' cooling solution. 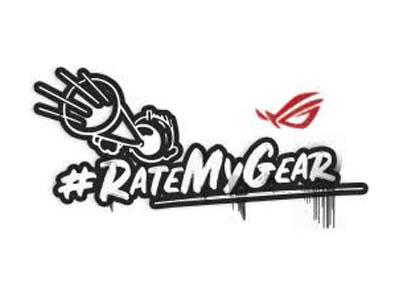