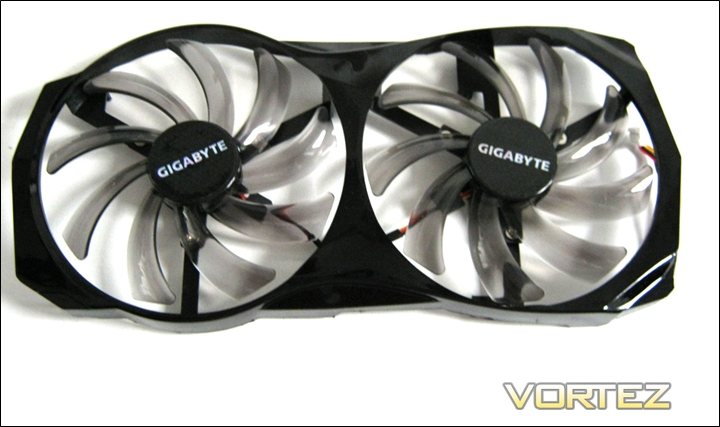 Shroud and fans
Removing the fan assembly was a relatively simple task with just four small screws attaching it to the heatsink. Both the fans and the shroud however are very delicate so care should be taken when cleaning the heatsink. 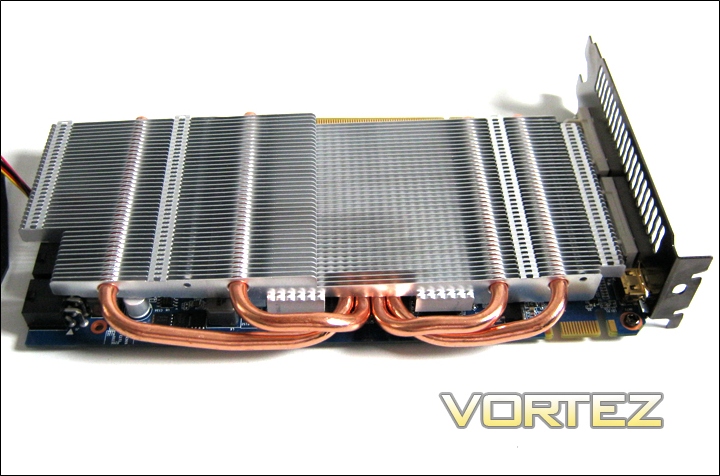 Heatsink top
The heatsink is a free venting design so while some of the air will be channelled by the heatsink, through the vent and outside of the case, much of the hot air will inevitably be vented back into the case. While this type of design is generally quieter and better for the card as its cooling performance is enhanced, it can sometimes add to case temperatures. The parallel inclined design of the Windforce 2X heatsink is apparent here boasting the ability to reduce turbulence and consequently noise. 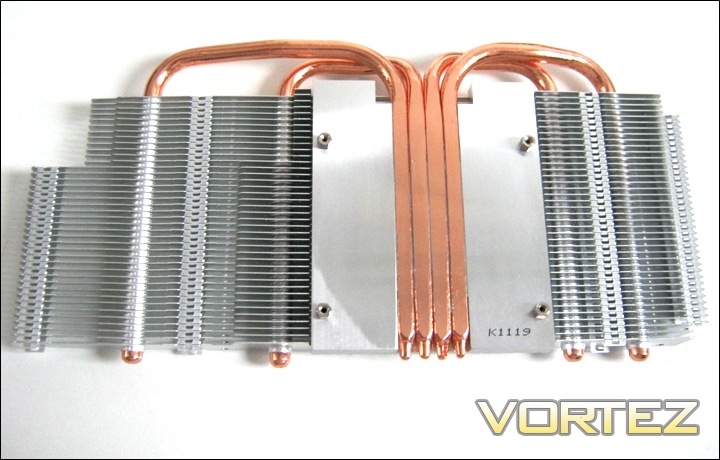 Heatsink bottom
Like the shroud, the heatsink is attached to the PCB by four screws, this time spring loaded. As you can see from the picture above, the four heatpipes come in direct contact with the GPU core. The heatpipes then channel the heat to separate section of the aluminium finned heatsink, spreading the heat dump making for an efficient cooling design. The standard thermal interface material was applied very well indeed with our sample making good contact to the heatsink without too much TIM seeping out from the edges. 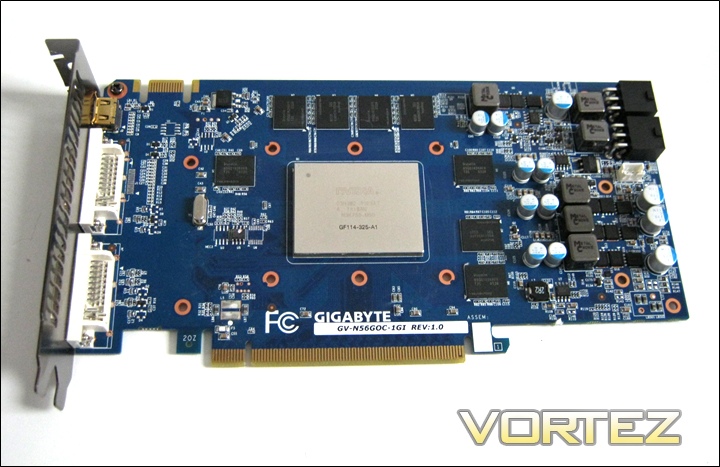 Naked PCB
Finally we arrive at the naked card itself. The electrical components are arranged very neatly with all of the power circuitry towards the PCIe connectors as you would expect. While the PCB has 11 holes to attach a cooler/heatsink, this design only uses 6 of them; four for the main heatsink and 2 for a mini-heatsink hidden beneath which provides additional cooling for the MOSFETS. 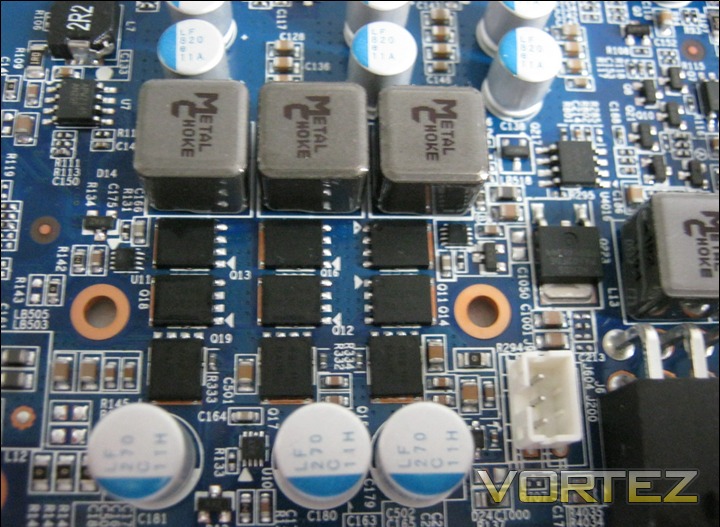 MOSFET cooler
Unlike the GTX560Ti's 4 choke setup, the GTX560 makes do with 3 phase coupled with 9 MOSFETS adjacent to the chokes. How this affects overclocking headroom we will investigate later in the review. 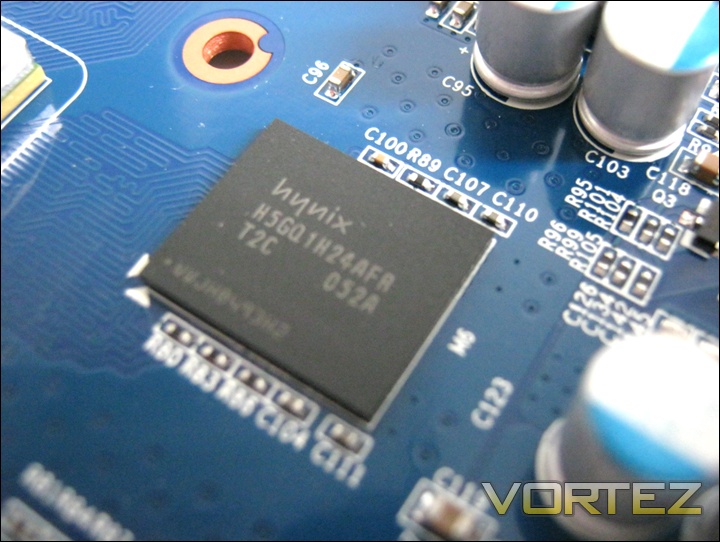 On-board GDDR5 memory modules
Unlike the majority of NVidia cards of late, the Gigabyte GTX560 uses integrated chips courtesy of Hynix. Sporting 128MB of GDDR5 each, the eight IC's totalling 1Gb are clocked at 2008MHz. The 8n prefetch architecture allows the memory to operate at 5.0Gbps @ VDD 1.5v with a CK frequency of 1.25GHz (WCK 2.5GHz). Perhaps even more impressive is that Gigabyte feel no additional cooling is required as none of the memory chips required make contact with the main heatsink body! 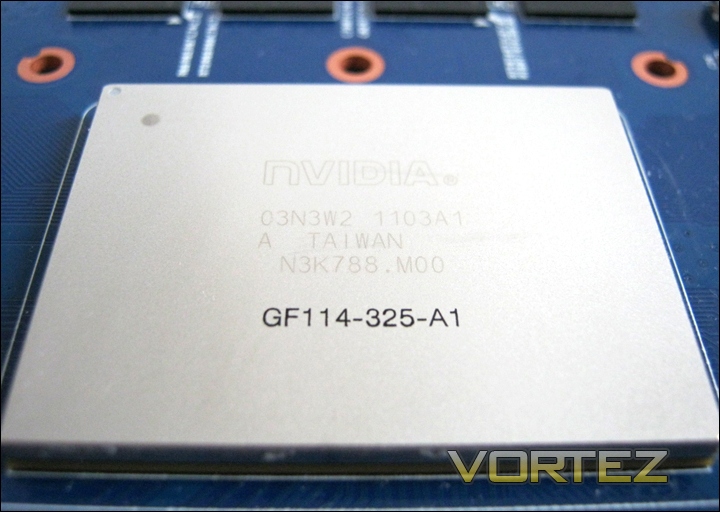 The GF114 GPU
Lastly, we arrive the heart of the GV-N56GOC-1GI, the GF114 core. Manufactured in Taiwan, the core has the familiar nickel plated integrated heat spreader shielding the fragile silicon beneath.