👤by Richard Weatherstone  Comments 📅04-08-11
Procedure
Unlocking the HD6950 requires the card to be flashed. We noted previously that the BIOS switch on the card can either be set to the factory default, 2, or the unprotected BIOS, 1.

1.Set the BIOS switch to 1 on the card (see image below) and reboot 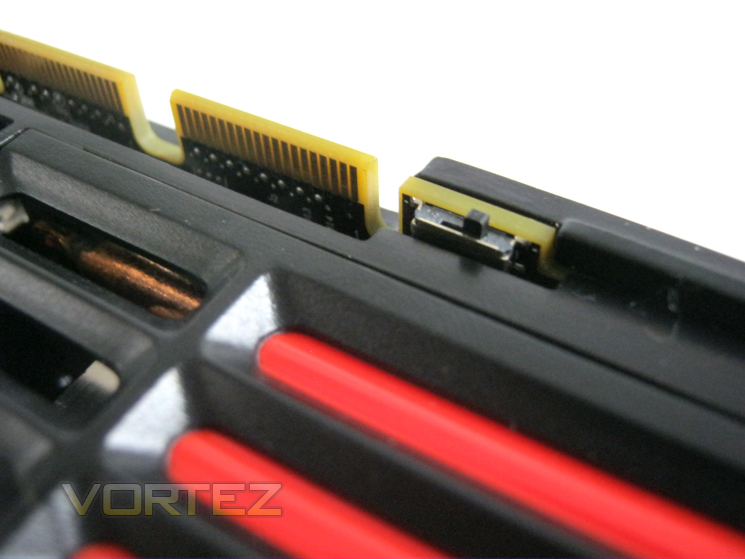 2.Download the ATI Winflash application from here and place extract it to your desktop (for convenience in the following steps)
3.Download the HD6970 BIOS of your choice from here (Note that all reference card BIOS will support voltage tweaking on the latest version of MSI Afterburner.
4.Run ATI Winflash. 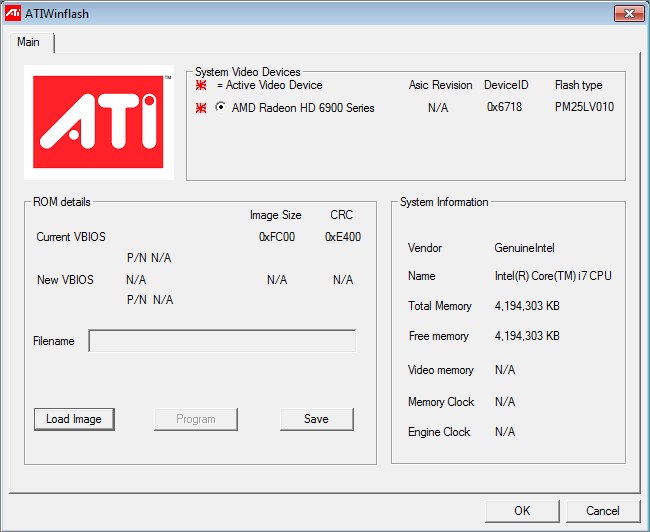 5. click Save to back up your HD6950 BIOS. We saved our stock BIOS in the winflash folder for ease of retrievel but you can save it anywhere you like, just don't forget where is is! 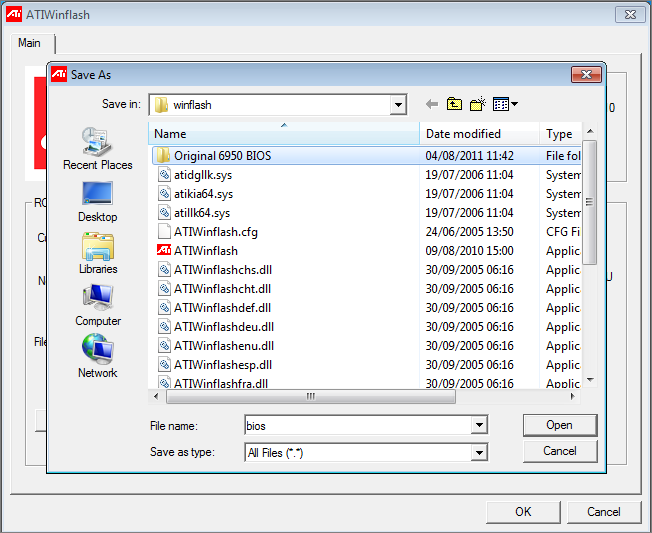 6.Click on Load Image and select the HD6970 BIOS you downloaded previously. 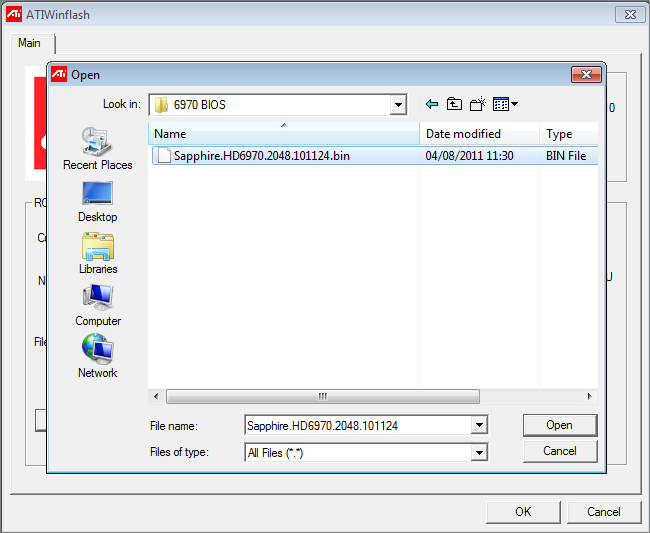 7. Press Program to start the procedure. 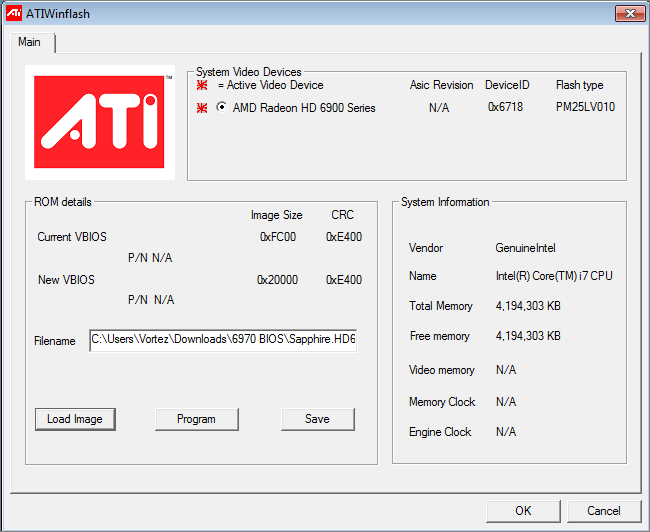 6.Once the flashing is complete, reboot your system and open up GPU-Z to check that if the card has all 1536 stream processors. Depending on the BIOS downloaded, the flashed HD6950 will also boast the 880/5500MHz clock speeds of its bigger brother and operate at 1.175V. I highly recommend setting the Power Control Settings to +20% in AMD CCC to ensure that the card doesnt throttle beyond its recommended TDP.

If this doesnt work, theres a second procedure that can be carried out.

1.Follow step 1-3 from the previous process.
2.Save the HD6970 BIOS in the Winflash folder and name it unlock.bin
3.Go to Start, Run, type in CMD and wait for the command prompt window to open up.
4.If the path listed is already C:\Users\Username, type cd Desktop\winflash and press enter, otherwise type cd username\desktop\winflash
5.Type "atiwinflash -unlockrom 0"
6.Type "atiwinflash -f -p 0 unlock.bin"
7.Wait for it to complete and it should prompt a message saying Verified

Due to some people having problems with the HD6970 BIOS, it is recommended that people flash using an unlocked HD6950 BIOS. The reason is that the two cards use different memory modules at different timings so the HD6970 settings may not be stable with the HD6950. Instead the new method I will detail below uses a proper HD6950 BIOS with all the stream processors unlocked but with all other settings as default including clock speeds and voltages. MSI Afterburner will allow you to overclock the card to HD6970 levels manually with fewer risks.

1.Set the BIOS switch to 1 on the card and restart
2.Open GPU-z and click on the icon next to the BIOS version to back up the original HD6950 BIOS. Save it as original.bin
3.Download the unlock script and extract the folder. Save your original HD6950 BIOS from step 2 into the extracted folder.
4.Run the batch file and it will create a modded.bin file which is the new HD6950 BIOS with fully unlocked shaders.
5.Download the ATI Winflash application from here and extract the folder within. Save the modded.bin file into the extracted folder.
6.Run ATI Winflash, click Load image and select the modded.bin file. Click on program and wait for the process to complete.
7.Restart your computer and open GPU-z to check that all 1536 shaders are unlocked. 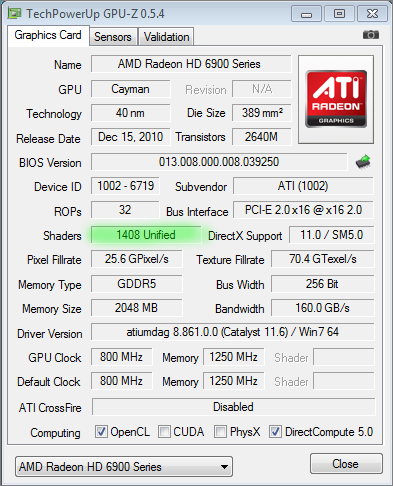 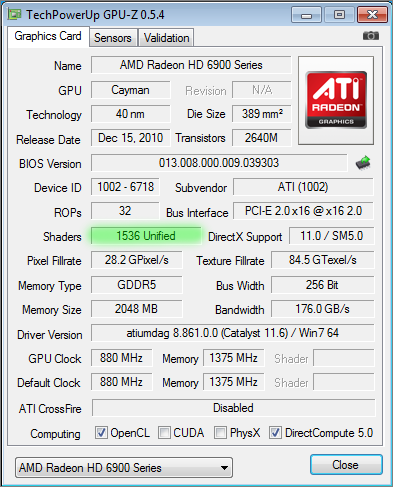 We can now see the fully unlocked card sporting all 1536 shader processes by having two SIMD clusters re-enabled, and the clock speeds being the same as the HD6970. What is remarkable is that despite our sample only overclocking to 865/5500MHz stably, it was fully stabled when unlocked thanks mostly to the higher voltage at which the core operated. It is important that the card is tested for stability after the unlock as the cores were binned for a reason and may not support such high clock speeds even with raised voltages.

Id like to give full credit to W1zzard at Techpowerup for coming up with the steps to the procedure.