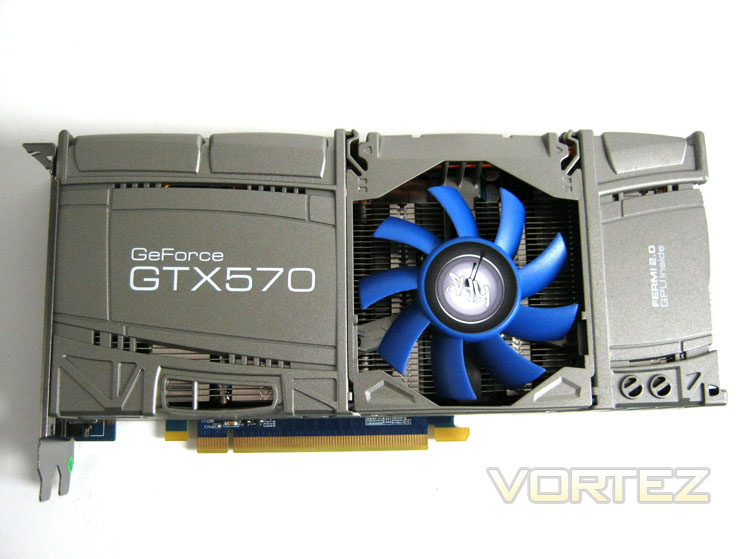 Card Top
Looking like something that has just jumped out of a Transformers movie, the KFA2 GTX570 has a very odd looking heatsink cover. The shroud may look like it's metal but it is simply plastic with a metal finish to it. The card measures 230mm in length so is perfect for those looking for a powerful graphics card but are short on real estate. The blue 80mm fan is positioned directly over the longitudinal heatsink fins and because of the full cover shroud, heat will be both ejected out of the case to the I/O area and also towards the front of the card. 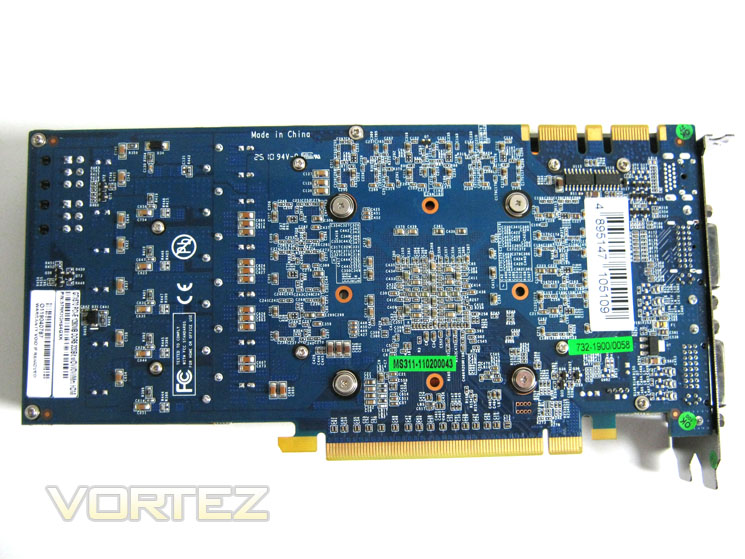 Card Rear
KFA2 have chosen a blue PCB to match the fan and it is reminiscent of GIGABYTE, SAPPHIRE and HIS who all tend to use blue PCB's. I'm not a big fan of a coloured PCB simply because it limits the colour scheme you may opt for when building a PC. Obviously, if you don't have a case with a side window this will not matter but for some, PCB colour can be just as important as performance. Again, we see that the manufacturer as also decided not to implement a back plate. While there would be no cooling benefit in this case as there is nothing to cool in this sample, a back plate would protect from short circuits and static electricity when installing/removing the card from the system. 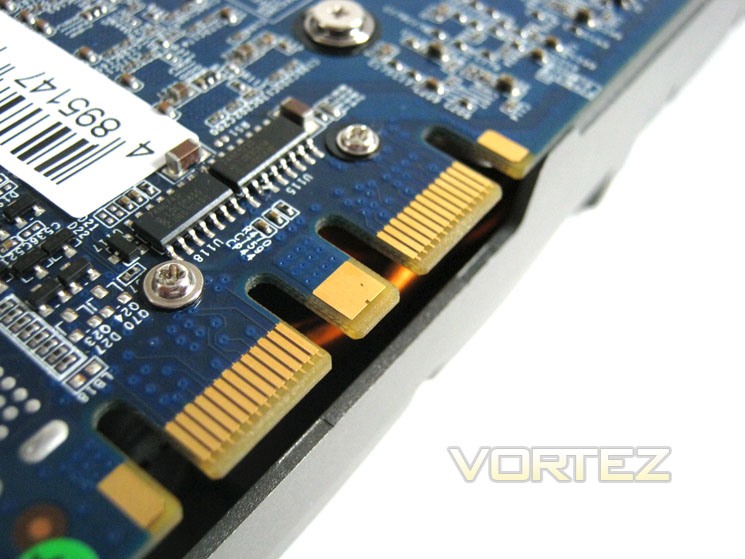 SLI
As with all GTX570's, the KFA2 GTX570 is capable of being linked to other cards from the same family either in dual or (should you motherboard allow) multiple GPU configurations. Sadly, as with most NVIDIA based GPU's, there is no SLI bridge in the accessories so please ensure your motherboard manufacturer has provided you with one if you intend to use SLI. 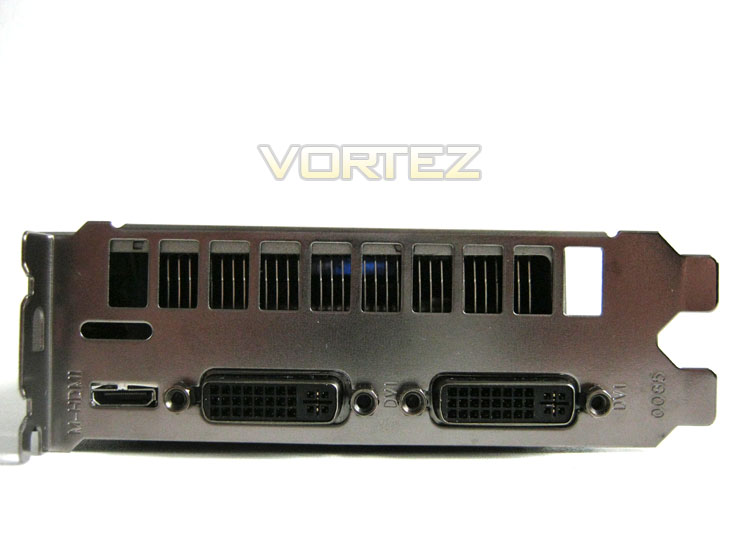 I/O Area
The KFA2 is capable of displaying a maximum resolution of 2560x1600 courtesy of 2x DVI ports. Should you wish to use HDMI then KFA2 have also added a mini-HDMI port and included a mini-HDMI to HDMI cable. Above the display ports is the main vent which is larger than the standard GTX570 I/O plate ensuring as much hot air is exhausted as possible with the least amount of restriction. 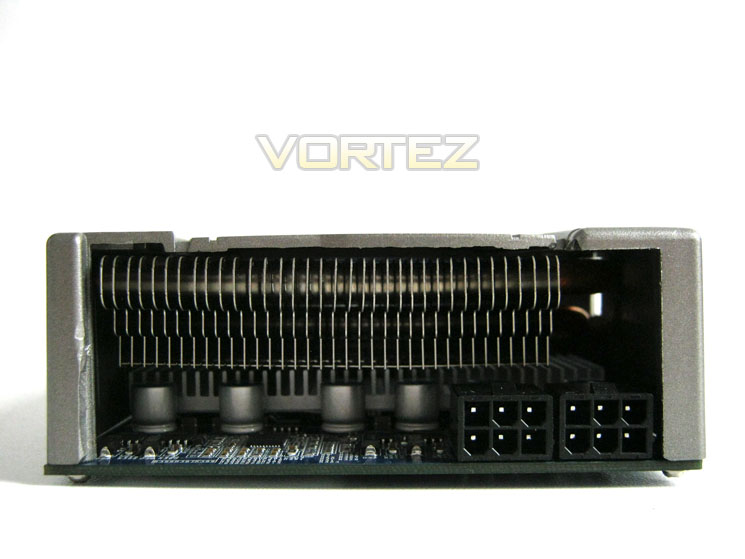 PCIe Power Ports
Unusually for a GTX570, the power ports are located at the end of the card, directly in front of the exhaust vent. I would have preferred to have seen the ports being positioned to the side of the card as those looking for a small card will now also have to add on the size of the PCIe power plugs which defeats the object of creating a small, compact card! Nevertheless, the side of the card looks a lot more flush without having PCIe power plugs in the way and will certainly assist those who may not have very wide enclosures. 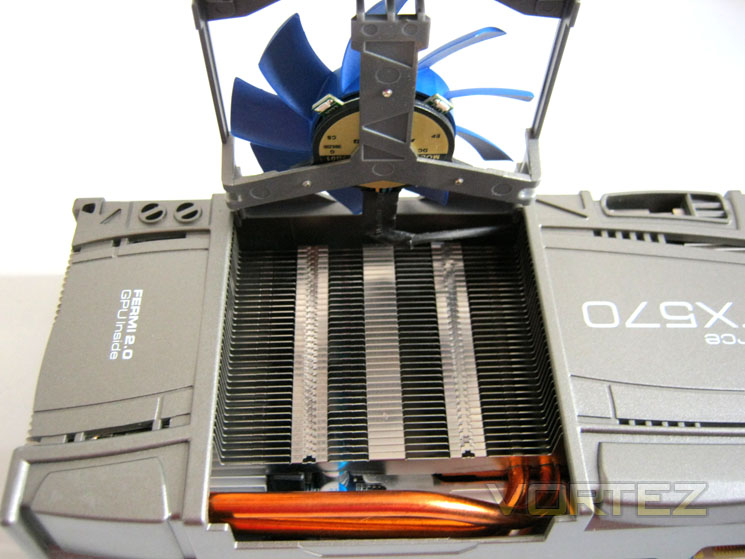 Fan latch system
I almost missed this impressive feature due to the complexity of the cooling shroud. Looking closely at the shroud I realised there is a latch mechanism which allows the user to safely move the fan out of the way to clean the heatsink. This is an extremely good idea as it will save people from removing the heatsink who could potentially damage the components hidden beneath. It will also ensure that given the correct attention to maintenance, the card should never overheat, even after years of use. Fantastic! 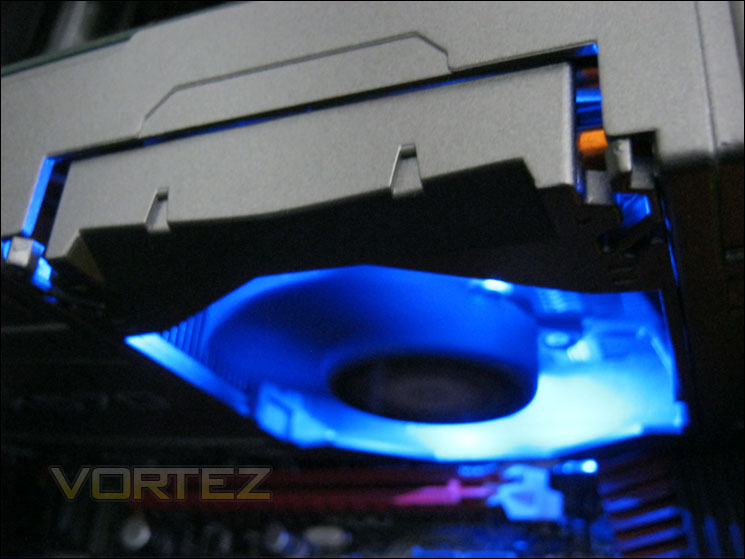 Blue LED fan
The fan has 3 LED's on the frame which emit a nice blue glow from beneath the graphics card. It's great to see manufacturers adding extra features like this to their cards and while colour choice is certainly a personal thing, the blue haze is not intrusive.

Let's see if there are any other surprises when we take a look beneath that impressive shroud...