The MSI B450 Gaming Pro Carbon AC sits at the top of the MSI ladder; this is their flagship B450 chipset motherboard offering the largest range of features including 802.11AC WiFi, twin M.2 ports (both of which support AMDs StoreMi), large power phase heatsinks and plenty of PCI-E expandability.

The Pro Carbon moves away from MSIs typical black and red colour scheme, focusing on a monochrome design with Carbon Fibre accents. Theres a small spattering of RGB LEDs around the motherboard, one section under the DIMM slots and the others peeking out from under the southbridge heatsink. We also find a full-length 110mm M.2 heatshield on the top port, to help improve NVMe performance by removing unwanted heat buildup. 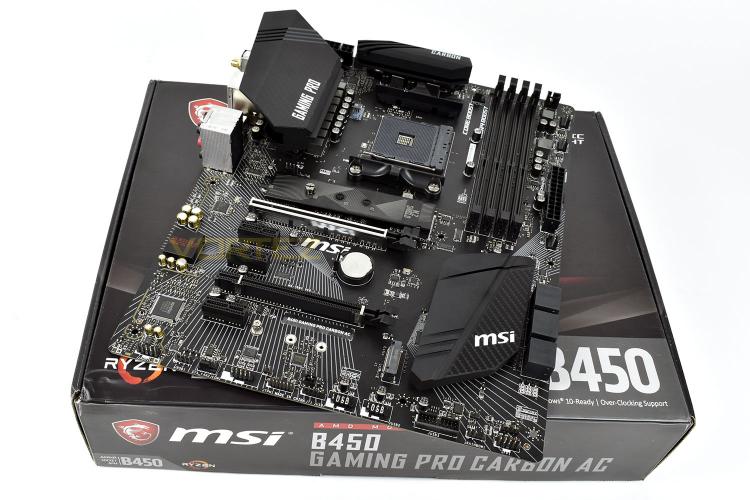 As well as the above features, were provided with AudioBoost 4 with Nahimic3 for great gaming audio, an Intel Gigabit LAN port, Bluetooth 5.0 for connecting game controllers or mobile phones. Theres also an abundance of RGB connections as well as more 3/4pin fan jacks than you can shake a stick at. Also, dont forget, AMDs B450 still supports overclocking so extra performance should be possible.

On the face of it, we can clearly see where MSI have spent the £120 budget, but does the performance back up the price tag? Read on to find out.

AMD on the 2nd Gen. Ryzen:
The 2nd Gen AMD Ryzen Processor (codename Pinnacle Ridge) is not merely and exciting evolution of the AMD Ryzen Family, but a fantastic new opportunity for PC enthusiasts to take home an impressively well-rounded platform. AMD has spent the past year listening to community feedback from Reddit, Twitter, customers, trade shows and websites like Vortez, to outfit our new processors with an awesome complement of user-first features. And when you add them all up, we believe we have the ultimate processor gamers, creators and enthusiasts.