Since Intels Sandy Bridge launched at the beginning of the year, end users have had countless affordable and mainstream motherboards available at their finger-tips but not everyone wants a mainstream offering. Extreme enthusiasts had to wait a few more months before the hardcore offerings surfaced and today we are looking at one such product.

MSI have been on a campaign to arm their products, particularly motherboards with what they call Military Class II components. What they mean by this is, higher quality more durable componentry in and around the motherboard meaning that it will be able to sustain extreme usage and stand the test of being put through its paces in the most exhausting of operations. Today we will be taking a look at the revered Big Bang Marshal. An extended ATX motherboard with an extensive feature-list  including 24-Phase DrMOS power design, 8 PCI-E for multi-GPU graphics with Lucid Hydra to mix NVIDIA and AMD graphics cards, Voltage Check-Points and much more! So lets waste no further time and begin our analysis of MSIs Big Bang Marshal. 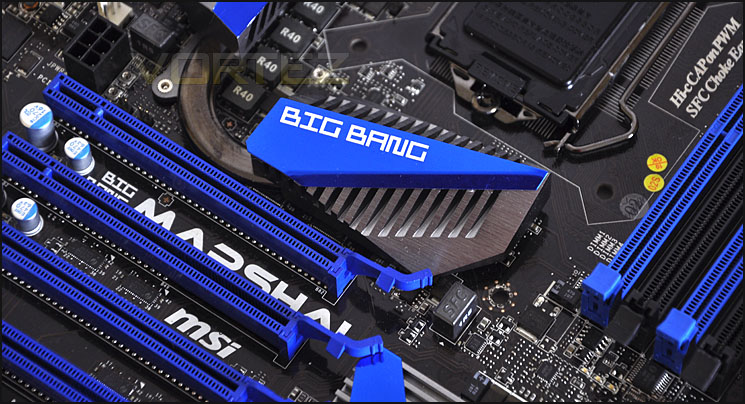 From the earliest Big Bang-Trinergy through the Big Bang-Fuzion to the Big Bang-XPower, the Big Bang Series tailored for gamers and extreme users has received unanimous acclaim from both the media and power users. In order to better impress consumers with premium products, apart from continuously enhancing product specifications, MSI has upgraded the conventional 2D vision to 3D vision. Along with the starlight background, MSI has not only extended the design consistency of the Big Bang Series, but also evolved the series to the brand new 3D version in order to fulfill the demand of power game users for powerful 3D effects.

In the new-generation Big Bang Series, product ranges have also been re-classified. These include two main ranges: Intel and AMD. In the Intel range, ZPower is equipped with the supreme Intel X-Series chipsets and Marshal with the Intel P-Series chipsets. The upcoming AMD's product is called the Conqueror. By re-naming and re-positioning the Big Bang series, we hope to make things simpler and more convenient for consumers.