👤by Sahil Mannick  Comments 📅01-07-10
Conclusion
Nvidia's answer to the popular ATI HD5850 (at least in the UK market) has been met by intense competition, which unfortunately didn't go their way. The GTX465 boast some impressive specifications and features and finally brings DX11 to Nvidia's mainstream graphics card product line. With the GF100 core under its hood, the cards sports the same benefits of the flagship GTX480, namely the architectural emphasis on high performance computing, DirectCompute and CUDA implementation. But looking at the performance, we are left wondering if Nvidia have forgotten their gaming heritage, which after all is their primary market. Of all the tests, the GTX465 only truly shone in GTA IV, UT3, Street Fighter IV and Far Cry 2. Of course, we can't forgot the excellent DX11 performance in the Unigine demo with tessellation turned on, outperforming even the HD5870. Conversely, this tremendous lead isn't reflected in the Battlefield and DIRT 2 results, both running in DX11 and the latter making use of tessellation. Power consumption was also one of the downsides of the GTX465.

Saying that, MSI have done a tremendous job customizing their GTX465 to make the card a viable option in today's market. For a small bump over the reference design, MSI packs many features to make their board an engineering masterpiece. It uses the best components available such as the solid capacitors, solid state chokes and highly conductive capacitors to deliver a smooth power delivery, better efficiency and in turn a longer life span. For enthusiasts, it ensures the best possible overclocking headroom and MSI have broken down the thermal obstacles by coupling their GTX465 with their innovative Twin Frozr II cooler. This latest iteration evolves on their successfully engineered concepts that have been honed over the years for maximum heat dissipation. The best aspect of the cooler is its near silent operation achieved with 2 80mm PWM fans. Finally they even bundled the much revered MSI Afterburner application to provide users an intuitive tool to get the most of the card, especially with voltage tweaking ability. Overclocking unlocked the card's real potential but unfortunately, this wasn't enough to trouble the HD5850, another card featuring a large overclocking headroom. The only disadvantage of the cooler is the fact that the heat is directed outside of the case but with a well ventilated case, this isn't a setback. 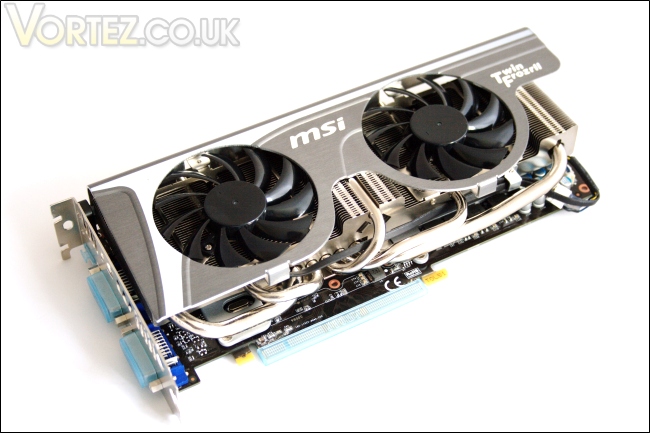 So, how can I sum up the MSI GTX465 Twin Frozr II. Fundamentally, it comes in at the wrong price point for its performance, making it flawed compared to ATI's line up. This is essentially Nvidia's fault and personally I commend MSI for only charging £250 for its vastly superior design over the reference card. Looking around, it appears to be a bargain for those wishing to get an Nvidia card without emptying their pockets for the more expensive GTX470 and GTX480 or even the reference GTX465. Overall, the MSI GTX465 is a very capable card that brings adequate performance, excellent overclocking potential to match a GTX470, a more efficient design and brilliant cooler (easily the best I've come across) that tames the GF100 core without compromising on noise.

Cons
[-]Power consumption
[-]Performance not on par with the competition

For their innovative design and for providing a viable alternative to ATI graphics cards, the MSI N465GTX Twin Frozr II deserves the Vortez Hardware Silver Award.

I would like to thank MSI for providing this sample. To discuss this article, please visit our forums.