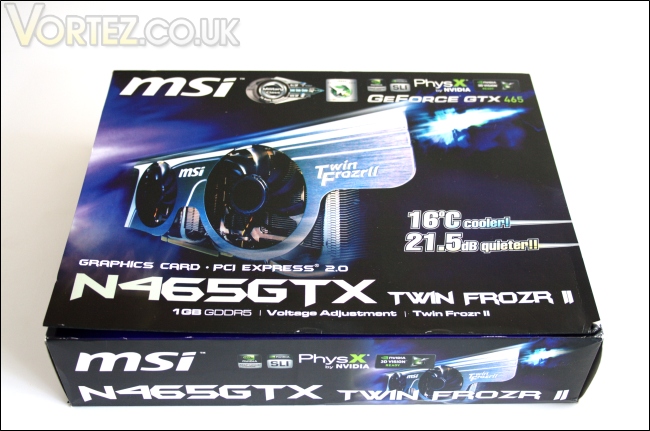 Front of the Box
The MSI packaging is fairly standard as we have come to expect from most products we see these days. However, they employ graphics to depict the power and key features of the GTX465. We can immediately see that their graphics card comes with a custom cooler with the blue colour theme keeping in touch with the chilling Frozr moniker. MSI are emphasising that their cooler is 16 degrees Celsius cooler than the reference design and 21.5dB quieter, making for a significant improvement. The main selling points are printed in bold to grab the attention of buyers and the box is certainly effective at doing so.

Key features of the card
In the top right corner, all the Nvidia specific features are listed such as support for PhysX, 3D Vision and SLI. MSI also advertise their cards as military class with a superior selection of onboard components compared to the reference design. Coupled with the MSI afterburner tool, their GTX465 is bound to be an overclocking fiend. 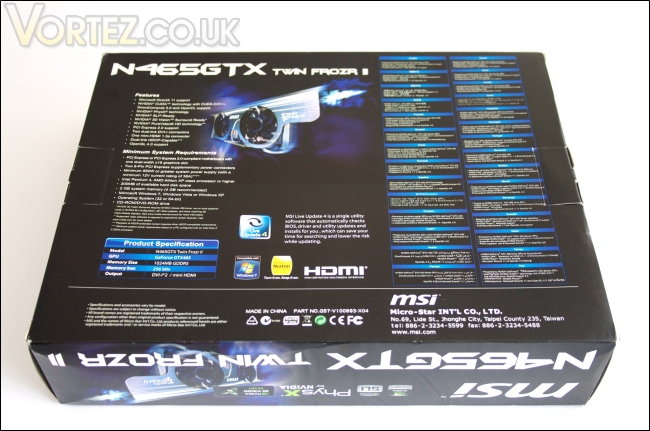 Back of the box
The rest of the card's features and specifications are listed at the back as well as the system requirements. Interestingly the key features are listed in an impressive 29 languages! 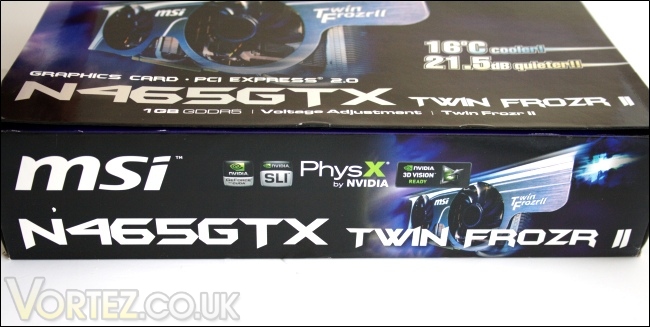 Side of the box
And just to re-iterate, this card is the Twin Frozr II edition promising unparalleled air cooling potential. MSI have delivered a number of concepts in the past, their latest being the Lightening and Hawk edition on the ATI series of cards. The Twin Frozr II design will be coming to other cards in the new generations of Nvidia Fermi cards. 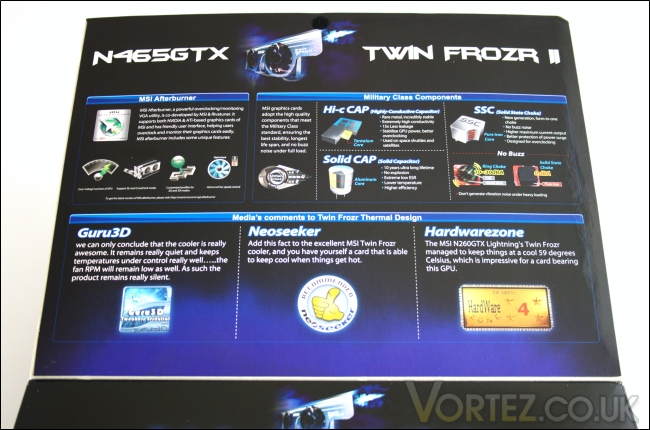 The front flap
The box uses a front Velcro attached flap which when opened, reveals more of the features specific to the MSI card. As well as the inclusion of MSI afterburner, the card comes with military class components in the form of highly conductive capacitors (Hi-c Caps), solid state chokes (SSCs) with pure iron cores, and solid capacitors with aluminium cores. These aim to deliver cleaner power delivery, a longer lifespan and better overclocking headroom. 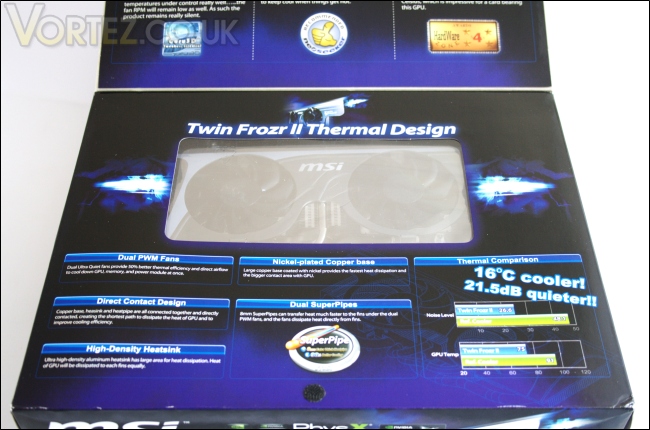 Window to the GTX465
Moving down, MSI informs us of the characteristics of the Twin Frozr II cooler design that when combined together, deliver excellent performance. The design is akin to CPU coolers we frequently test, so users can expect to see five thick heat pipes, a direct contact copper base, a high density heatsink design and two ultra quiet 8cm PWM fans to dissipate the heat. Conveniently the packaging has a clear plastic window revealing the GTX465 inside.