A year on from the release of the Cypress based HD5870 and HD5850, AMD are looking at refreshing their line-up of cards with some new offerings. Any graphics card release is met by a certain level of hype and following the huge success of the HD5XXX series, consumers have every right to expect more great things from AMD. However, in a confusing turn of events, todays release is aimed at targeting the mid-range market as opposed to the traditional method of releasing the high end cards first to create a halo effect. More confusing is AMDs bold choice of renaming their new series of cards to reflect an entirely refreshed product range, as opposed to intuitively carrying the moniker weve been accustomed to seeing since the HD3870 launched a few years back. Typically, the X870 naming convention has been reserved for ATIs high end offerings, but under the new AMD logo rebrand, they have decided that the moniker will now symbolise their mid-range segment. The confusion arises in the fact that consumers accustomed to the old naming scheme will confuse this new card as the replacement to the Cypress based HD5870, when in fact it will replace the Juniper based HD5770.

Naming scheme aside, it is the price/performance ratio that we are most interested in and readers should hold their prejudice until this becomes clearer later in the review. At £200, AMD are targeting Nvidias highly popular GTX460 with their HD6870/6850. Comparing them to their rightful Juniper predecessor, the Barts core has undergone a number of architectural tweaks to provide much better performance. Firstly, the number of shader processors has increased from 720/800 to 960/1120 and a wider 256bit bus will no doubt alleviate the low memory bandwidth of the old mid-range cards. Furthermore, AMD are claiming significantly improved tessellation performance, an issue that had plagued the 5 series in comparison to Nvidias outstanding performance in this department. With the promise of high performance at a low price point and low power consumption, AMDs new cards will no doubt prove to be a success.

The card we have received from MSI is the more expensive of the two Barts based graphics card, the HD6870. It follows the reference design and comes clocked at a very healthy 900/4200MHz. In true MSI fashion, they have included a number of features to differentiate their products from the competition, such as bundling the highly useful MSI Afterburner utility. 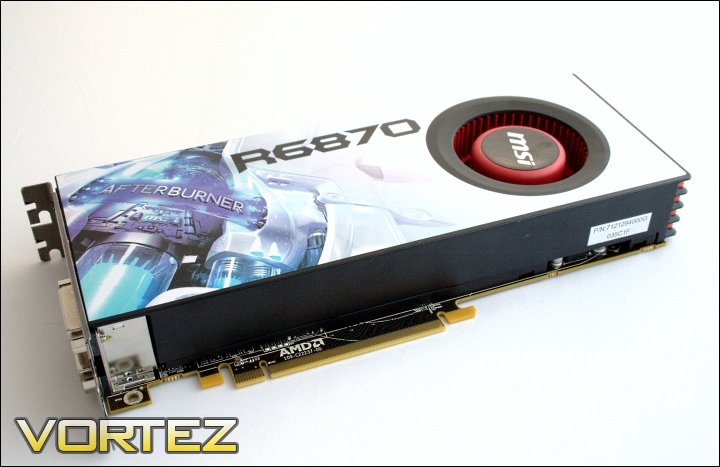 The HD6870
With that covered, lets check out the card.