As announced at Computex earlier this year, Noctua have been working on their next-generation of cooling fans for the last few years and they, along with a host of new accessorises, are finally set to launch. The new cooling fans themselves are collectively known as the A-Series and today we will be looking at the models most likely to be used by home consumers - the 200mm 'NF-A20' and the slimline 120mm 'NF-A12x15'. Whilst Noctua's chosen naming convention can initially seem bewildering, it's somewhat necessary given the wide range of cooling products that they actually produce and sell to varying markets.

In addition to the aforementioned models, Noctua are also set to release the 40mm 'NF-A4x20' but this is aimed squarely at their "industrial clients who are looking for a 40mm fan providing superior performance in pressure-demanding applications". Given this likely use-case scenario, this review will concentrate specifically on the 200mm and 120mm models.

When it comes to aesthetics, Noctua are perhaps infamous for their chosen colour scheme. Beige and brown are certainly unique however, and Noctua products are unlikely to be confused for any other manufactures product stack. Although the grey-on-grey Redux re-brand back in 2014 added a little variation to the line-up, albeit not a desperately exciting one, we see that the standard Noctua combo is back with these new additions. You might not be a big fan (pun, not intended), but it's hard to argue against the perceived quality of any blower wearing the Noctua home-kit. 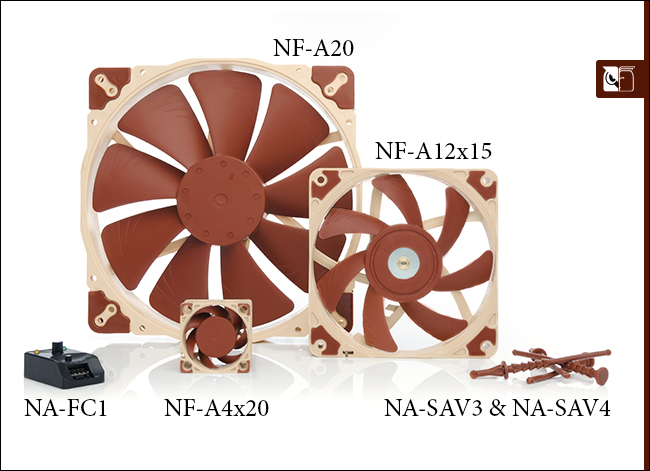 Noctua on their A-Series
"Customers have been asking us for 20cm and slim 12cm fans for years, but meeting the quality standard users have come to expect from Noctua fans in these form factors has proven very challenging, so it took us quite some time to make sure that these fans live up to our name, explains Roland Mossig (Noctua CEO).

With the 20cm NF-A20, Noctuas biggest fan yet, the key challenge was that the mass of the impeller is about four times greater than that of 12 or 14cm fans and thus creates a significantly higher load on the bearing. In the end, the difficulties were overcome by increasing the diameter of the axis and the bearing from 3mm to 4mm in order to distribute the load over a larger bearing surface, as well as by using a new fibreglass reinforced polypropylene (PP) material, which reduces the mass of the impeller by 26% as compared to Noctuas standard fibreglass reinforced PBT material.

For the 12cm NF-A12x15, a steel-reinforced motor hub and brass axle mount are being used in order to assure the required stability despite the fans 15mm thin profile. Both the NF-A20 and the NF-A12x15 will come in 4-pin PWM versions for automatic speed control and 3-pin FLX versions that include Low-Noise and Ultra-Low-Noise adaptors, which give full flexibility in configuring the fan for maximum cooling capacity or near-silent acoustics.