In our recent evaluation of the AMD Radeon HD7790, we saw it take the entry level crown away from the NVIDIA GTX650Ti. We suspected that NVIDIA has an answer waiting in the wings and that has been borne true with today's release of the NVIDIA GTX 650 Ti BOOST. The keyword being BOOST as the GTX650Ti has undergone a refresh to combat the new threat poised by AMD. When we reviewed the original GTX650Ti were were impressed with the FPS that the little card churned out however we were left wanting because for the most part, gaming at today's most popular resolution of 1920x1080 proved troublesome. NVIDIA admitted this in the media press pack for the new release so hopefully, we will not see a repeat performance today as the AMD HD7790 has proven that you don't need to spend a fortune to play games at 1920x1080 to a playable FPS level. 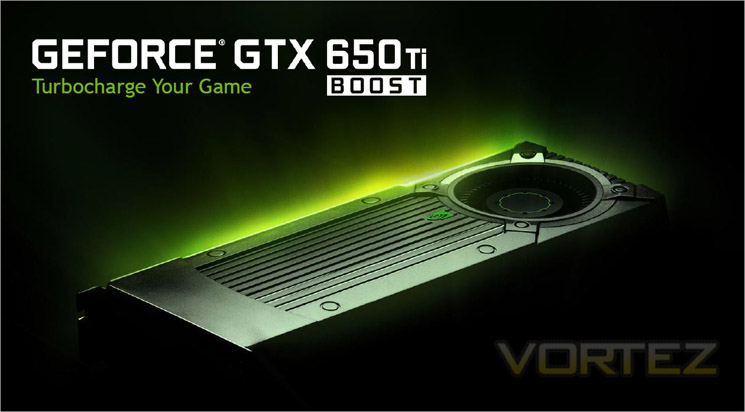 The GeForce GTX650Ti and the new BOOST version is aimed squarely at those looking to gain a foothold in the gaming market while still keeping a close eye on cost. The GTX650Ti was criticised for not including GPU BOOST (an automatic overclocking feature) in the original concept which, as the new naming suggests, is now included in the refresh. Also included is and improved memory interface, increasing from 128bit to 192bit. The final enhancement of this card is the option of SLI, a key feature missing from the original design.

The NVIDIA cards in this range have moved on quite a lot in the past five years with the 9600GT in 2008 to the GTX550Ti in 2011, Today's GPU which is the latest in the evolution is almost 6.5 times faster than the 9600GT and some 3x faster than the 550Ti so if you are looking to replace like for like you will see quite a healthy 'boost' in performance.

About NVIDIA
NVIDIA awakened the world to computer graphics when it invented the GPU in 1999. From our roots in visual computing, weve expanded into super, mobile and cloud computing. NVIDIA's mobile processors are used in smartphones, tablets and auto infotainment systems. PC gamers rely on GPUs to enjoy spectacularly immersive worlds. Professionals use them to create visual effects in movies and design everything from golf clubs to jumbo jets. And researchers utilize GPUs to advance the frontiers of science with high-performance computers.