👤by Sahil Mannick  Comments 📅08-07-11
Conclusion
Lets start by applauding Prolimatech for an excellent job on the Genesis. It is a breath of fresh air when we see a unique concept that turns out to be so successful as it demonstrates the risks that manufacturers have taken to further the field of air cooling. Tower heatsinks will always be good performers if a certain formula is used but to create a new design takes a different level of engineering which Prolimatech has somehow pulled off. I must admit that I was sceptical when first introduced to the Genesis. The relatively narrow radiators seemed like a novel but bad idea considering other manufacturers were focussing on ever bigger tower heatsinks, and even thick dual tower ones. However, on closer analysis we found that Prolimatech have carefully designed the radiators to have a greater length allowing the overall surface area to be higher than the best single tower heatsinks currently available. A promising start for such a concept but the key question was how it was going to translate to real world performance.

Thankfully, Prolimatech delivered. Its efficiency with various fan combinations matched the likes of the Thermalright Venomous X and even the Thermalright Silver Arrow and Noctua NH-D14 in some cases. The latter two were still consistently better or are on par with the Genesis but rarely outperformed so credit to both for still retaining the crown, especially with the overclocked CPU. At stock speed, the Genesis demonstrated its efficiency with the 140mm Noctua NF-P14 and high RPM Coolink SWiF-120P 120mm fans very well. The Genesis is flexible in its fan configuration because it supports both 120mm and 140mm fans, and buyers are left the choice of deciding themselves. So although the Genesis was designed to primarily work with Prolimatechs Vortex 140 fans, buyers can opt for more powerful ones if they prioritise cooling performance over acoustics. Nonetheless, I was still impressed by how well the fans performed on the Genesis. The only drawback is that fans such as Thermalrights TR TY-140 are also quiet, perform better and are available for cheaper. 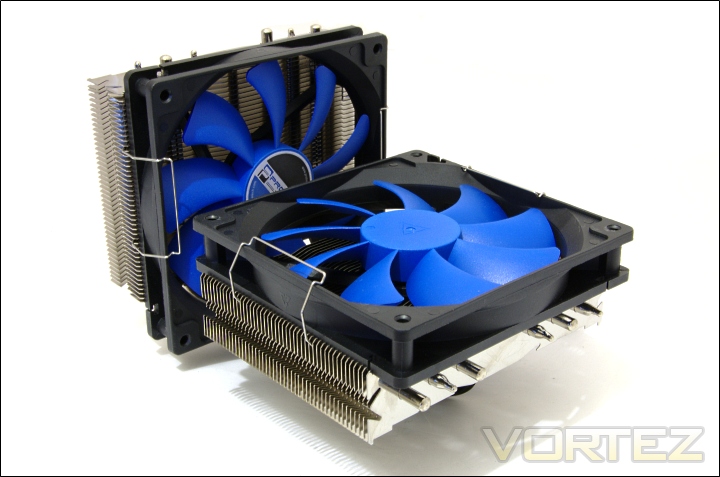 The Genesis has other advantages thanks to its unique design but there are compromises to be made. The sheer size of CPU coolers always raises the question of RAM compatibility. Prolimatech somehow managed to address this issue and moreover compliment users choice of memory modules. The position of the horizontal radiator provides around 5cm of clearance so taller memory modules (Corsair Vengeance) will be supported without fans getting in the way. The fan placement also means that the Genesis can provide additional cooling to those modules. Prolimatech advertise the Genesis as a Super Cooler that can also cool the components surrounding the CPU such as the Northbridge and MOSFETs. Unfortunately, we didnt find this to be the case but nothing lost there as most motherboards provide adequate cooling. The main downside on the other hand, is that the horizontal cooler blocks access to memory modules and underlying cables. Whilst not a major problem for most who install components and leave their rig alone, it is still an annoyance especially to enthusiasts who like to change components as often as their clothes.

So here we have a cooler that seems to perform amazingly well and takes memory compatibility into consideration, surely there must be something negative to report? Well, there is and this is the inevitable cost of the Genesis. At £55 or over without fans, it is one of the most expensive heatsinks on the market. The Silver Arrow is £5 cheaper and still retains our performance crown while the Noctua NH-D14 which shares the crown is £10 more expensive but bundles two fans to compensate.

The Genesis is a brilliant concept by Prolimatech and it has proven to not only be very effective but also versatile in nature. I wouldnt be surprised to see other manufacturers borrow the idea and reproduce their own concept.

It gives me great pleasure to give the Prolimatech Genesis our coveted Vortez Gold Award.