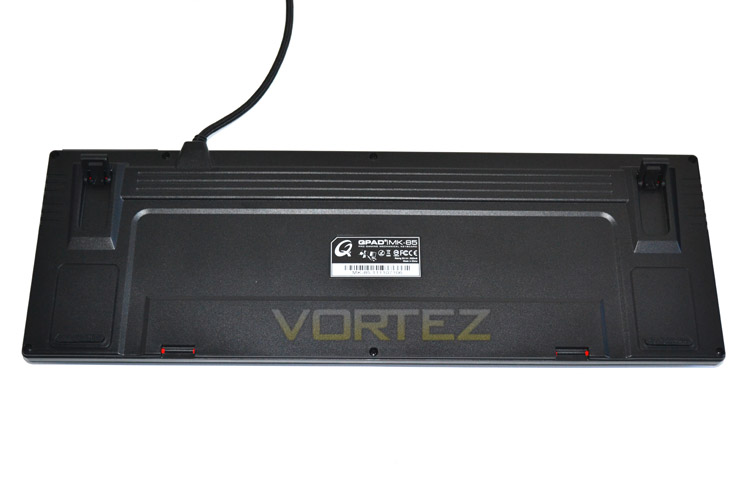 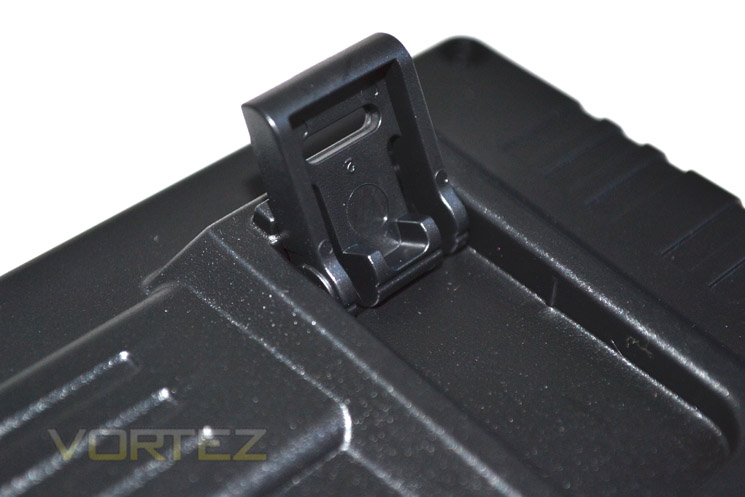 Keyboard Legs
The legs click firmly into place in either raised or lowered position and are thick enough to prevent all but the hardest of strikes to the keyboard. 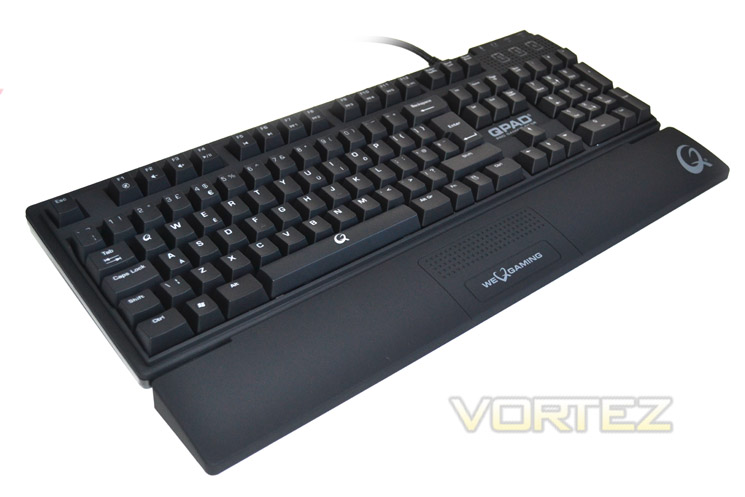 Wrist Rest Attached
The wrist-rest clips are of the same design as the MK-80 which is a shame as they are not the thickest type we have encountered. I would perhaps like to see a better implementation of attaching the wrist rest as I can imagine some people inadvertently breaking the small tabs which are used to attach the wrist-rest to the keyboard. Luckily for us, ours held up to the brute force of snapping the wrist rest into position. 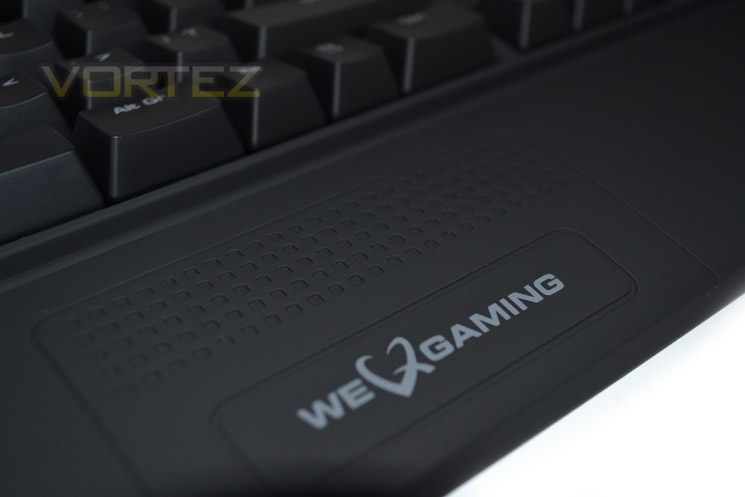 Textured Plastics
The photos in this review do not do the keyboard textures justice I'm afraid. Rather than using basic, rigid plastic the whole keyboard frame, including the wrist-rest is adorned in a velvety rubber like coating which feels extremely nice and much more appealing than the cheaper plastics often found on keyboard surrounds. 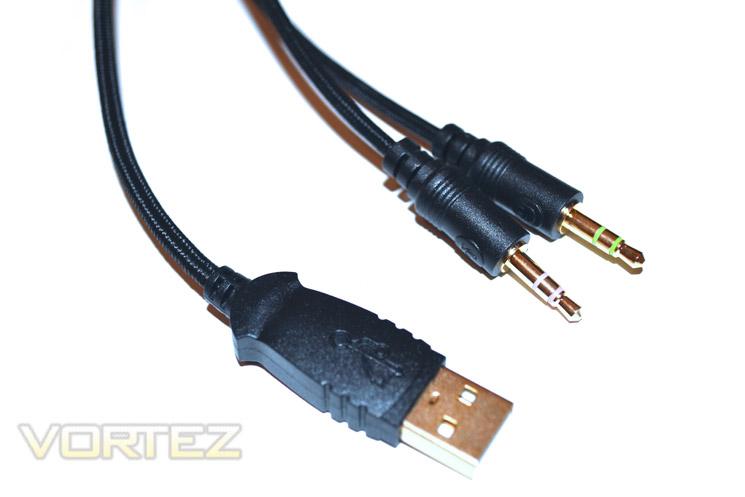 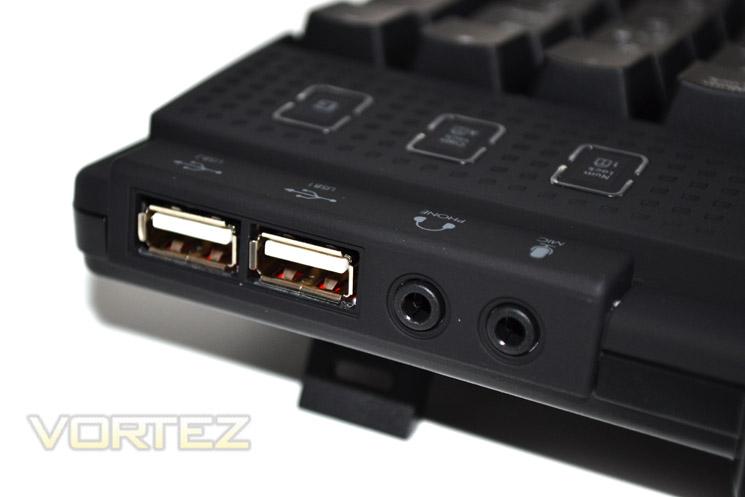 USB/Audio Hub
Like the MK-80, the MK-85 makes use of an audio pass through allowing you to attach your headset/mic to the keyboard assuming the keyboard is plugged into the audio/mic ports. Despite the ports and plugs being gold plated there was still a defined drop in audio quality. It's a nice feature to have for gamers which will keep a headset's cables out of the way but audiophiles would do well to avoid using them. As expected, there were no complaints about the USB connectivity. I could charge my iPhone as well as plug my DSLR into the keyboard to transfer photos which saved me hunting around the back of the test rig.

It is worth stating at this point that the MK-85 is the worlds first keyboard capable of full n-key rollover function through a single USB port. Other offerings use either multiple USB ports or more commonly a PS2-USB adaptor. USB has traditionally only been able to support 6KRO (6-key rollover) which means 6 key presses can be detected at once. When you consider that the MK-85 offers full NKRO (every key can be pressed and detected at once) along with backlighting, all through a single USB port then you come to appreciate where that hard earned money has been spent. 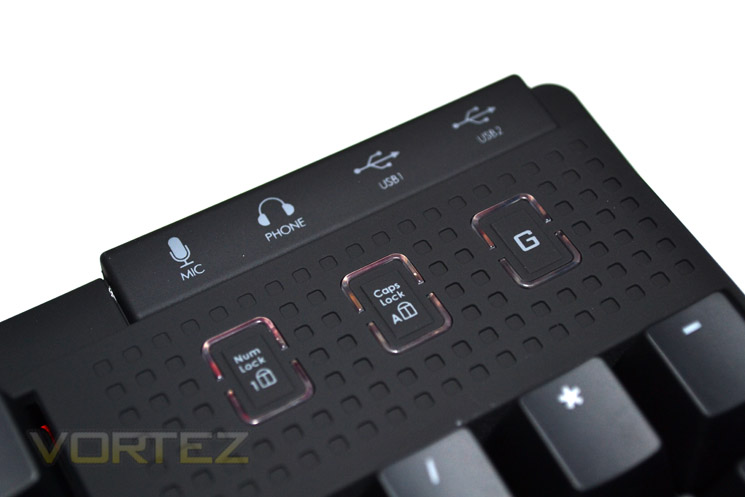 Locking Identification
The MK-85 features the same illuminated lock identification plate as the MK-80 only this time the Scroll Lock light has been replaced with a G. The 'G' is for gaming which identifies the keyboard is in gaming mode with all of the associated features enabled/disabled.

Let's fire the keyboard up and see what else it has in store for us...