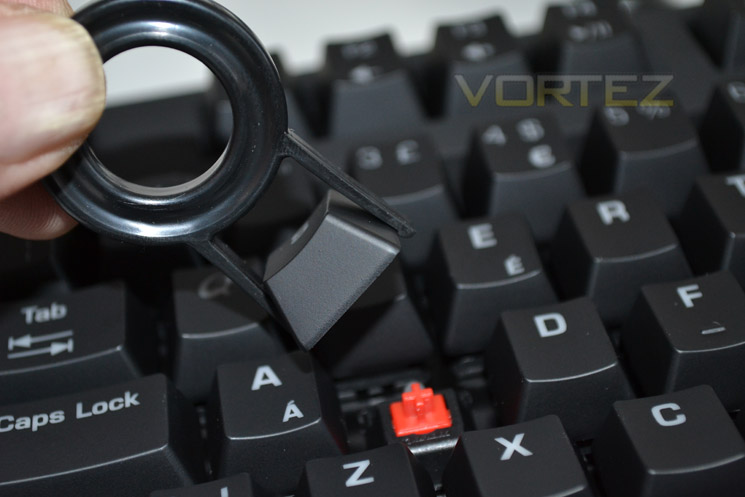 Key pull
As stated previously, the QPAD MK-85 allows the option of replacing up to four keys with blanked out orange/red keys meaning the keys can be replaced anywhere on the keyboard however because of the key profiling, some keys may stand higher than others. A slight tug on the key pull is all that is required to remove the key. 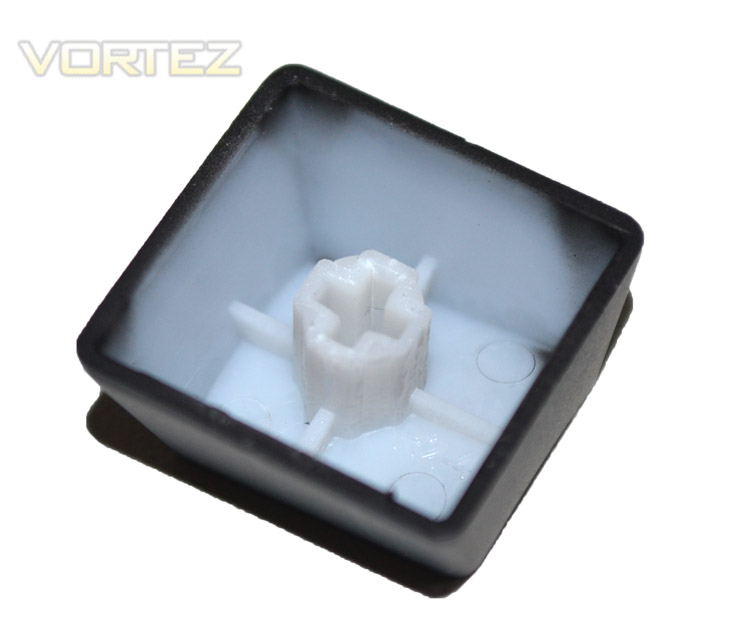 Painted Key Caps
With the key removed we see that QPAD have used translucent keys, sprayed black then etched to allow light to pass through the key. This method results in a very luxurious feel to the keys but I do worry at the longetivity of the keys. With this in mind I tried to scratch some of the paint/dye away but despite my best efforts this could not be done. 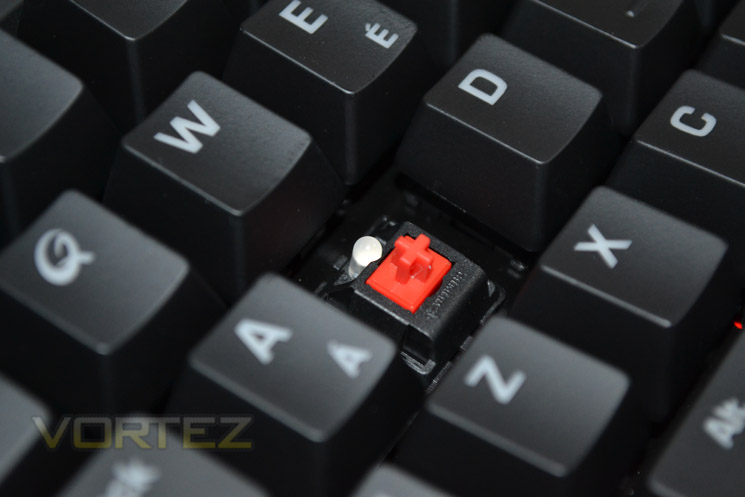 Cherry MX Red
Unlike the MK-80 which used Cherry MX Blue switches, the MK-85 has Cherry MX Red switches. The main difference between the two types is that the blues are tactile (clicky) while the reds are linear (non tactile) in operation. Both the blue and red switches have the same travel and actuation points (40mm and 20mm respectively) however the Cherry red switches are a little lighter in operation requiring 40g of force rather than the 45g of the MK-80 so the MK-85 will feel ever so slightly lighter than a Cherry MX blue keyboard and a fair bit lighter than a Cherry MX black equipped keyboard which requires up to 60g of downward force. 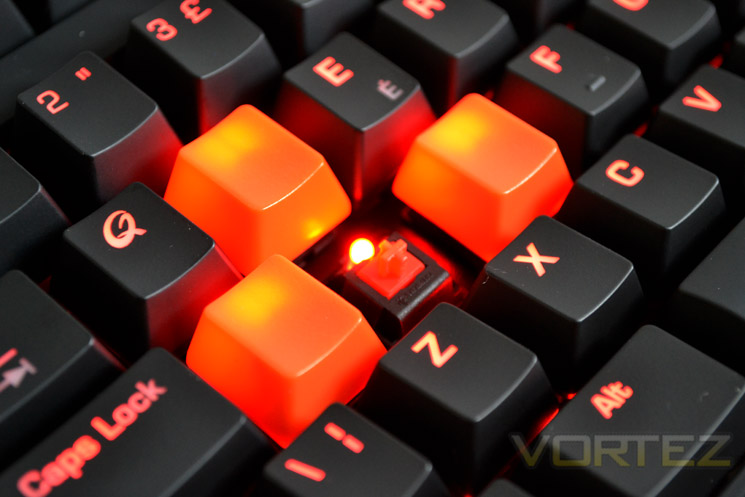 LED Lighting
In common with the MK-80 is the inclusion of LED backlighting. This time however and like the switch gear used, QPAD have opted to use Red instead of Blue. Each key is individually lit so the spread of light is even across the keyboard however the secondary functions are noticeably dimmer than the primary due to the positioning of the LED's. 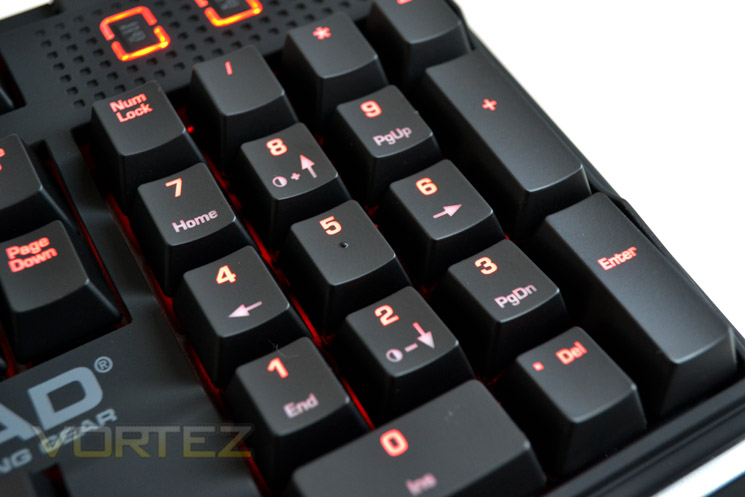 Brightness Adjust
If you find backlighting tacky you can adjust the level of brightness by five stages, off, low, medium, high or 'breath'. The breath function sets the light to pulse very slowly through varying levels of brightness. 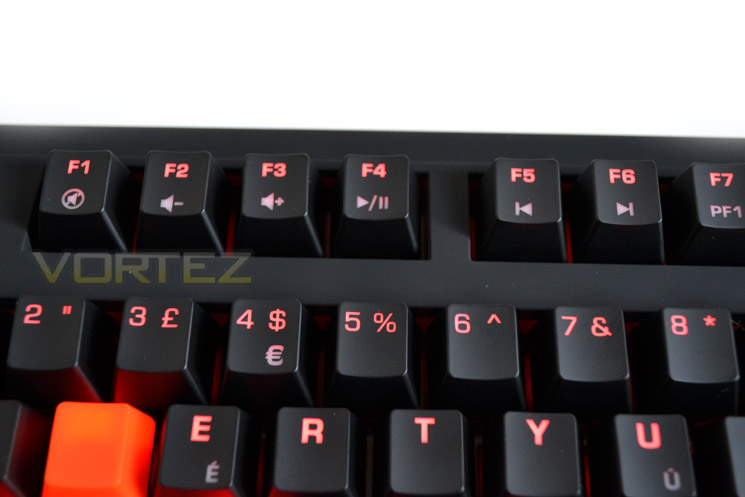 Media Keys
The media keys make a return to the MK-85 and control volume up/down/mute, along with play, pause, previous and next controls available via pressing the Fn key in conjunction with the corresponding control key. Basic functionality but a nice addition nonetheless. Personally, I prefer a dial to control volume and had hoped this change had been made with the MK-85 as it was one of my criticisms of the MK-80 but with real estate at a premium it is understandable by its absence. 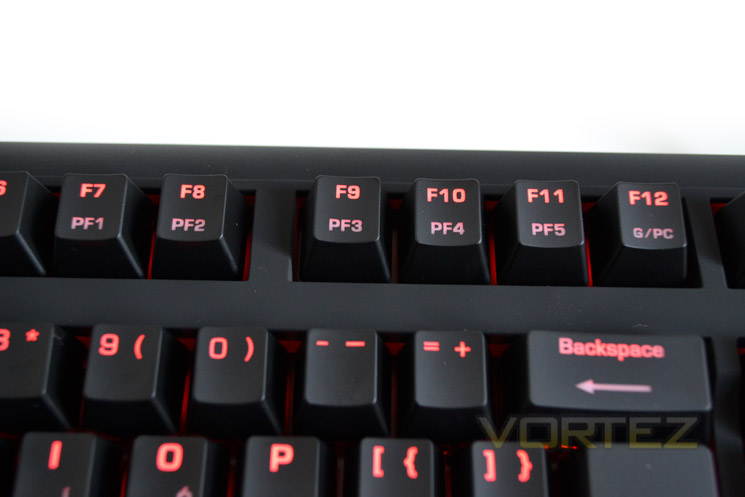 Profile Keys
Moving further along the function keys we see there are five profile keys and the G/PC key. The profile keys store, as you would expect, keyboard profiles (more on this later) with the G/PC key turning the gaming profile on/off. 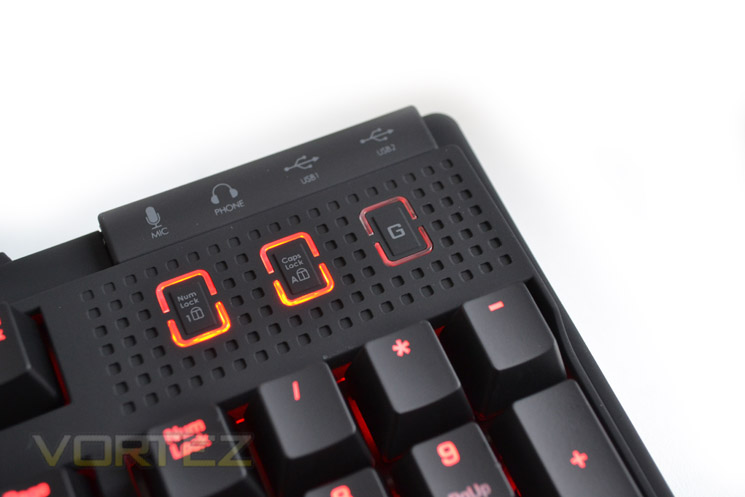 Lock keys
Again, we find that the caps/num/game lock illumination does not dim in line with the rest of the keyboard instead staying on full brightness regardless of what the backlighting control is set to. Obviously there needs to be some identification of whether caps lock is enabled or not but it would be nice to be given a choice of brightness for this area too.

There are currently 129 user(s) online:
Google