Samsung are rapidly becoming one of the biggest brands on the planet, dominating markets left, right and centre. We already rely on them for high quality televisions and monitors, their mobile division produces millions of devices per year, they make washing machines and fridge-freezers and, of course, flash storage in the form of SSDs, such as the Samsung 860 EVO and the Samsung 970 PRO NVMe drives.

Today we look at something we've not seen from Samsung before; a Thunderbolt 3-based portable solid state drive. Last year we examined the Samsung T5 SSD which was incredibly impressive, this time around we're testing the Samsung X5 1TB.

Samsung claims the Samsung X5 is capable of read and write speeds of 2800MB/s and 2300MB/s respectively; if those ring true in our testing, this will be the single-fastest external drive we've seen, without question. To achieve those speeds, Samsung have used an M.2 NVMe drive featuring the latest 3-bit MLC V-NAND, paired with a high-speed controller and their TurboWrite technology.

The Samsung X5 uses the Thunderbolt 3 interface, most notable for its 40Gbps bandwidth and up-to 100W of power; however, despite using the same cable as a USB Type-C drive, the two interfaces are not to be confused. This does cause the drives intended audience to be much smaller than a typical USB Type-C drive, mainly limited to those using Apple Mac machines, or modern high-end laptops. (In fact, for this review we partnered with MSI and tested X5 with the MSI GS65 Stealth Thin 8RF). On the other hand, that same limitation of only using Thunderbolt 3 also opens up many doors with its high bandwidth, making the drive viable as a scratch disk for content creation professionals. 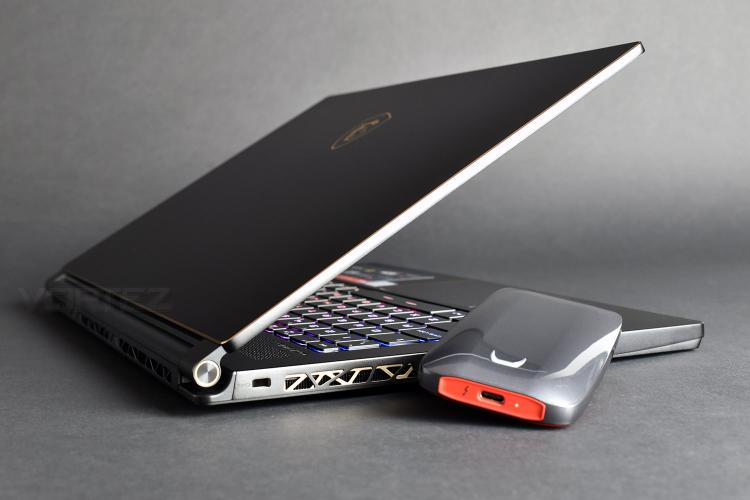 Along with the SSD, Samsung pre-load the X5 with Samsung Portable SSD Software, with versions for Windows 10 and Mac OS, which enables 256-bit AES hardware encryption. Its always nice to know your data is safe if you happen to misplace the drive at any point.

While the lack of USB Type-C support is inconvenient, there's plenty of choice aside from the X5 if that's what you're after, but a massive hurdle to overcome will be the price. Our 1TB sample is priced at £629 in the UK, equating this to around 60p/GB, with the alternative capacities arriving at a similar price per gigabyte level.

With all of that said, there's only one thing left to do, rip open the packaging, show you the device and run some tests. See you at the other side.

Samsung on the X5 SSD:
Samsung Portable SSD X5 is a revolutionary external storage with integrated cutting-edge NVMeTM and ThunderboltTM 3 technologies. The X5 is designed for content creators and high-tech professionals who need fast and secure access to data in a lightweight and compact storage solution. The X5 also leads the industry with a 2TB capacity option.