Announced at AMD's 30 Years of Graphics And Gaming celebration last month, and newly released this week, the Radeon R9 285 is AMD's first major card launch since the dual-GPU R9 295X2 was released back in April. Indeed it is their new silicon since Hawaii debuted with the Radeon R9 290X in October of last year. All indications are however that this new card isn't a major architectural revision, instead relied on the tried and tested GCN architecture which served them well through the 7000-series and into the 97 & R9 era, perhaps waiting for a mature 20nm manufacturing node to become available. As a consequence major performance gains from this new GPU, codenamed Tonga, may be too much to expect; AMD have surprised us in the past though.

The Tonga Pro GPU within each R9 285 has specifications quite similar to the (Tahiti Pro-based) Radeon R9 280 it obstensively replaces. In addition to being based on the same 28nm lithography process it also features the same number of shaders, tessellation units, ROPs and an equivalent Z Stenzil Buffer depth as its predecessor. It is also clocked slightly lower and has a narrower memory bus (256bit vs 364bit), and less VRAM overall (2GB vs 3GB). In fact, the only value for which it exceeds the R9 280 is in memory bandwidth (5.5 Gbps vs 5 Gbps). 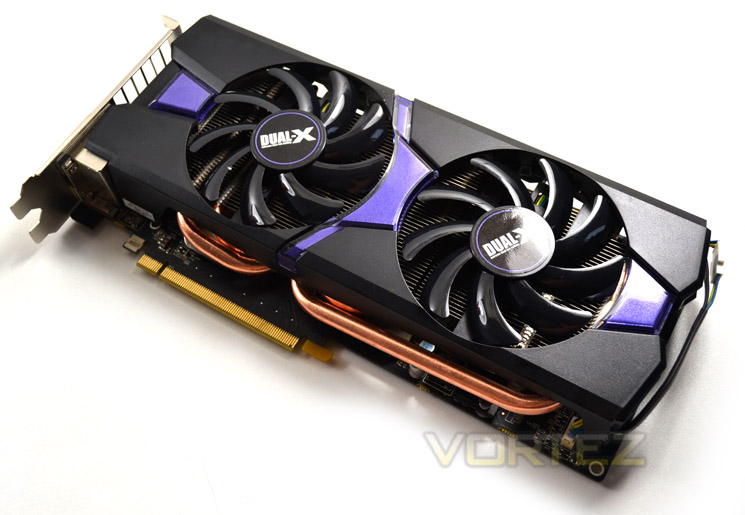 So if on paper it's less powerful than the Radeon R9 280, what's the point? Well, in theory two-fold - as it's brand a brand new GPU some of the rough edges of the older Tahiti design can be ironed out, allowing for its horsepower to be used more effectively. With an anticipated TDP envelope of only 190W compared to 250W AMD certainly view it as more efficient, and demands only two 6-pin PCIe power connectors as a result.

It's also the first mid-range AMD GPU to support their TrueAudio Technology. The card therefore has an on-board DSP capable of a significantly more complex soundscape in games, additionally able to reduce CPU load proportionately. Such a card therefore is crucial to showing developers that they're committed to the technology and pushing it into the hands of customers. Square Enix's Thief (2014) was the first title to support TrueAudio, whilst the recently released Lichdom: Battlemage leverage's it in a more significant capacity.

Perhaps therefore we should simply set aside the naming convention, and instead look at its absolute place in the market. It's priced at £170, comparable with NVIDIA's GTX 760, and should in theory be ~10-15% faster. Not for the first time therefore AMD is relying on the value of the product to sway customers even if the technology is inherited from previous designs.

Today we're testing Sapphire's interpretation of Radeon R9 285's reference design with bespoke cooler, but it's notable that AMD's partners have in the main launched with their own variants offering alternative cooling options and in some cases factory overclocked specifications. Furthermore Sapphire will be releasing a 'Compact Editon', reducing the length of the GPU and making it more suitable for cramped system builds without compromising performance. Cards with 4GB VRAM are likely on the way as well, bringing a large frame buffer for more robust performance in high resolution gaming.

Today marks a very important day for AMD graphics. Were introducing the most compelling product in the market for high resolution gaming with the Radeon R9 285 GPU, and also continuing our dedication to AMDs Unified Gaming Strategy, with the newest Never Settle bundle, said Matt Skynner, corporate vice president, Computing and Graphics Business, AMD. These announcements demonstrate our commitment to delivering world-class graphics products and show the strength of our relationship with the worlds most renowned game developers.